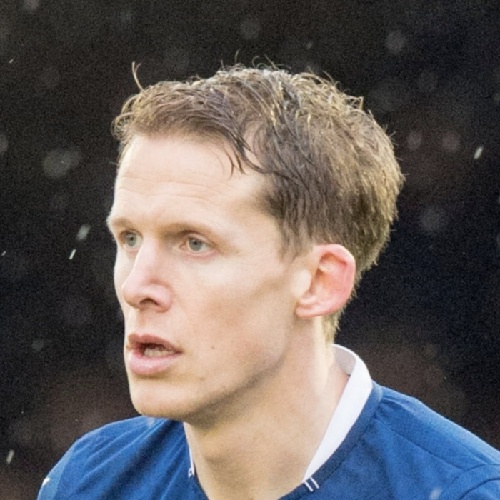 Christophe Berra was born in Edinburgh and progressed through the youth academy at Hearts, making his first team debut in November 2003. The defender has made over 250 appearance for the club over two spells, and was part of the Hearts team that finished second in the league and won the Scottish Cup in the 2005/06 season.

George Burley handed Christophe his Scotland debut in 2008, and he has gone on to amass 41 caps, scoring 4 goals.

In January 2009 Christophe transferred to Wolverhampton Wanderers for a fee of £2.5million. He became a mainstay of Wolves side under Mick McCarthy, helping the team win the Championship title in May 2009 and promotion to the Premier League.

Christophe left Wolves in 2013 and signed for Ipswich Town, once again linking up with Mick McCarthy. He was a consistent performer for Ipswich over 4 seasons, making 185 appearances before signing a pre-contract agreement to return to Hearts in 2017.

In January 2020 Christophe signed for Dundee on loan from Hearts until the end of the season, adding much needed experience to the Dundee backline. Playing alongside Jordan Forster and Josh Meekings in a back three, Christophe made 6 appearances and helped Dundee keep 5 consecutive clean sheets before the season was curtailed due to the COVID-19 pandemic.