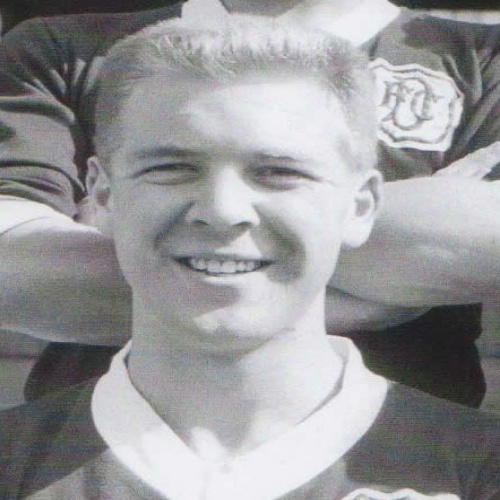 When Craig Brown was appointed Scotland manager in 1993, many in the Scottish press asked ‘Craig who?’ but when challenged by the media in his first press conference about what he had won in his career, he silenced them by saying he had won Scottish League championship with the Dark Blues in season 1961/62.

Brown remembers his time at Dens with fondness and when asked why he picked Gavin Rae for his Scottish squad against Poland in April 2001 (Rae became the first Dundee player to represent Scotland in fifteen years), Brown replied, “Because he plays for Dundee”. He clearly has a love for Dundee Football Club.

James Craig Brown was born in Hamilton on July 1st 1940 and was educated at the former Hamilton Academy. He played for the school in the Scottish school competitions and in youth and junior international teams before joining Rangers from Coltness United aged nineteen. He failed to find a regular first team place at Ibrox and therefore moved to Dundee on loan in January 1960, becoming new manager Bob Shankly’s first signing.

The move was made permanent in that summer when Dundee agreed an £8000 fee and Brown also became curiously the last player Shankly sold, when he joined Falkirk in 1965, shortly before Shankly himself departed. In between times, the 5ft 7in fair haired, crew-cutted Brown would make just sixteen appearances for Dundee during his five years at Dens but his career was severely hampered by the knee injury which would eventually force him to retire. Brown always travelled with the first team squad but with no substitutes in those days, his appearances were limited and he himself says that if substitutes had been introduced earlier, he would have made a record number of appearances from the bench.

Brown made his first appearance for Dundee during a 1961/62 pre season tour of Iceland when he played on July 12th against Icelandic champions Akranes who had eight internationalists in their side. The Dark Blues won 4-0 thanks to goals from Cousin, Penman (2) and Smith and the local press described Dundee as apart from Moscow Dynamo, “the best side ever to play in Iceland.”

Brown impressed playing the full ninety minutes at left half and in his autobiography describes his excitement at visiting “a country that I had only read about and been fascinated by, never actually considering that I would actually be seeing it one day.”

Brown also describes that the flight carrying the twenty-strong party from Renfrew to Reykjavik was delayed for four hours by seagulls fouling an engine and how the Club were keen to forge links with Europe’s northernmost capital. Dundee secretary Bob Crighton carried goodwill letters from Dundee Lord Provost Maurice McManus (whose wife would raise the Championship flag at Dens on the first day of the 1962/63 season) and handed them over to the Icelandic civic authorities in a gesture of friendship.

Brown made his competitive debut midway through the Championship season on February 3rd away to Kilmarnock when he replaced skipper Bobby Cox who was out with an injured knee. He retained his place the following week at home to Motherwell when Cox failed to recover and then on February 17th lined up against Arsenal at Highbury as the two clubs played a friendly after both had been knocked out of their respective national cup competitions.

Cox returned for the trip to Celtic on March 3rd but Brown retained his place when Andy Penman was dropped and he lined up at wing-half, with Bobby Wishart moving to inside-right. Four days later Penman was back in the side for the visit of Dunfermline in place of Gordon Smith who had picked up an injury at Parkhead and so Brown lined up against the Pars and was again in the side for the return match with Arsenal at Dens on March 10th.

In total Brown would play nine consecutive games in the Championship winning year and for the last four of them would play at left half in place of the injured Bobby Wishart. Brown himself picked up an injury on March 31st in a 3-2 win over bottom placed Stirling Albion at Annfield and despite his appearance in the team coinciding with a poor run of results, he was described in The Courier as “a definite success during Dundee’s lean period.”

In his autobiography Brown makes light of the fact that his run in the side coincided with Dundee’s losing spell but in truth he had let no one down and was even nominated as Dundee’s man of the match following the defeat at Celtic Park in March. His nine games saw Dundee win three, draw two and lose four (in a row) but those games included the crucial 0-0 draw with Rangers at Dens on March 14th which stopped the rot, the 3-2 win in Kirkcaldy the week after and the 1-0 home win over Hibs on March 24th when Dundee got firmly back in the title race thanks to Rangers unexpected home defeat to Dundee United at Ibrox.

The frustrated Brown now had to spend his time recuperating in Dundee’s Fernbrae Nursing Home and was forced to scramble for news of The Dee in newspapers and on the wireless and television but he did make it out in time for April 28th to accompany his team-mates to watch them clinch the title at Muirton and join in the League Championship winning celebrations.

The following season, Brown played five times, four in the league and one in the League Cup in the opening match of the season against United at Tannadice but he was part of the travelling party on Dundee’s fabulous European Cup adventure.
Something else that Brown was part of was Alex Hamilton’s singing group ‘Hammy and the Hamsters’ alongside Andy Penman, Alex Stuart, Hugh Robertson and Kenny Cameron. Having started up as a bit of fun on training camps, the group actually released a single in April 1964 called ‘My Dream Came True’, the success of which was restricted to the local Dundee area where they also performed on stage.

Chances on the football stage however were limited for Brown, with only two appearances in the 1963/64 season and when Falkirk came in for him early in 1965, he went to ask Shankly for advice and was told, “Son, I’m getting out of here and I advise you to do the same.” Shankly had become disillusioned with the continual sale of big players like Ure, Gilzean and Cooke and in March 1965 quit to take over at Hibs but not before he sold Brown to The Bairns for £6000.

Brown would make just seventeen appearances at Brockville and eventually called time on playing career in 1971 after five operations on his knee.
Craig quickly showed a keen interest in being involved in the coaching side of football and he became assistant manager of Motherwell in 1974. He got his first managerial job as part-time manager of Clyde in 1977, where he spent ten seasons - winning the Second Division championship in 1982 - whilst also working as a primary school head teacher then a lecturer in primary education.

He returned to football full-time in 1986 when Scotland manager Andy Roxburgh appointed him as assistant manager and also put Brown in charge of Scotland's youth teams. In 1989, he coached Scotland's Under-16s to the final of the FIFA Under-16 World Cup and three years later coached the under-21s to the semi-finals of the UEFA Under-21 Championship.

In December 1993, Brown replaced Roxburgh as manager of Scotland having been caretaker for games against Italy and Malta and he took Scotland to both Euro 96 and the 1998 World Cup as well as leading his Scotland team to a 1-0 win over England at Wembley in November 1999.

Brown left the Scotland job in 2001 and had two years in charge at Preston and was linked to the vacant managerial position at Dens in October 2008 before it eventually went to his former Dark Blue team-mate Jocky Scott.

Brown did however return to management in Scotland a year later when he took over at Motherwell with former Dundee boss Archie Knox as his assistant and after a year at Fir Park, the pair moved to Aberdeen to take over from Mark McGhee at Pittodrie.

Craig Brown will most likely be remembered for his managerial career and in particular his successful time with the national side but those of a Dundee persuasion will tell you that he is one of an elite group of fifteen men to make Dundee the Champions of Scotland.

At the Club’s 50th Anniversary dinner in the Caird Hall in April 2012, Brown was one of the guest speakers and spoke warmly of his time and Dens and alongside other squad members Bobby Waddell and Alex Stuart was belatedly presented with a Scottish League championship winning medal. The next time the media asked him what he has won therefore, he now has a medal to show them.