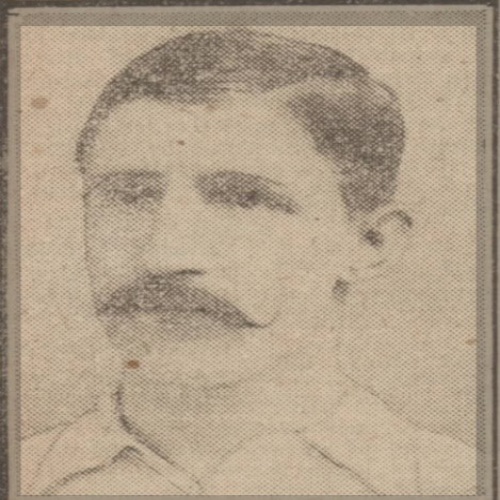 Throughout the club’s 118 year history, Dundee have had a fine tradition of fantastic front men and that tradition started in The Dee’s very first season with centre-forward Jimmy Dundas who notched thirty goals in all competitive and friendly matches in the inaugural year.

Dundas joined Dundee in the summer of 1893 when his club Our Boys amalgamated with local rivals East End to form the new Dundee Football and Athletic Club and seek admission into the Scottish Football League.

Dundas had played for Our Boys for two seasons having signed for them on the eve on the 1891/92 season and in his first year he collected a league winners’ medal when Our Boys shared the inaugural Northern League championship with East End. The Northern League was a local alternative to the Scottish Football League incorporating teams from Forfarshire, Perthshire and Aberdeenshire and later involving the Fife teams and after much deliberation, the first season's competition consisted of eight teams, three of which were from Dundee, including Our Boys and East End. Both clubs finished on nineteen points from fourteen games and in the days before goal average or difference, the clubs shared the title but East End were kicking themselves after being deducted two points for fielding an ineligible player.

Dundas scored twenty-three times on the way to winning the league including a double in a 4-4 home derby draw with East End in January when ten minutes from time, the crowd broke through the ropes and pelted an East End official with snowballs!

Dundas was also on target in the Dundee Charity Cup semi final win over Dundee Harp and in the final against East End who won the match 3-2. He was on target again in the final the following year when Our Boys again lost out to bitter rivals East End, this time 4-2 but not before Sheffield United tried to tempt him away with a huge wage offer of £3, 10s a week but Jimmy stayed true to his amateur Corinthian beliefs and turned down the chance to turn pro, just months before professional legislation came in, in Scotland.

That Dundee Charity Cup Final on Saturday 13th 1983 was the last competitive match that Our Boys ever played as after the final, during the usual civic reception at the Albion Hotel in Tally Street, Mr Buttars, an official of Our Boys, as well as president of the Dundee Charity Football Association, proposed a merger of Our Boys and East End to unite the city's divided footballing factions in an attempt to gain admission to the Scottish Football League when presenting the trophy. Upon receiving the Charity Shield (despite the competition being called a ‘cup’ the trophy was in fact a shield), Mr Black of East End fully supported this view and on May 20th the two clubs met in the Mathers Hotel in Whitehall Place and agreed to merge to form Dundee FC. At that meeting they drafted their application to the Scottish Football League and were voted into the SFL at the expense of Hibernian, Clyde, Abercorn and Cowlairs on June 12th to usher in a new era of football in the city

Jimmy Dundas therefore officially became a Dundee player when his registration was transferred to the new club and he was in the line up for their very first game on the Glorious Twelfth of August a few months later against Rangers at West Craigie Park. The new club had expected to play its games at the home of East End at Carolina Port but the Harbour Trustees surprisingly gave the lease to Strathmore and Dundee were left to kick off at Our Boys’ ground at West Craigie Park, a site now occupied by part of Baxter Park Terrace and Park Avenue.

After falling two goals behind to the Ibrox men, inside-left Sandy Gilligan scored Dundee’s first ever goal to pull Dundee back into the match. This sparked a revival in which Sandy Keillor and Jimmy Dundas found the net and at full time the fledgling Dees could be well pleased with their point from an exciting 3-3 draw.

By the end of the season, Dundas had scored 12 goals in seventeen league games to finish as Dundee’s first ever top goal scorer; an excellent average of one goal every 1.4 games and he missed just one game due to injury.

Dundee finished eighth in a ten team league, having won six and drawn three of their matches and with no automatic promotion or relegation, Dundee were one of the bottom three who had to apply for re-election. Thankfully Dundee received fourteen votes alongside Clyde and Leith who got eight and those three teams were re-elected at the expense of Cowlairs, Renton and Hibs who received who received four, three and one votes respectively.

It was a pleasing end to Dundee’s first season therefore but with just eighteen games in the league campaign, clubs had to arrange friendlies to supplement their income, especially after the League ended on May 10th. Dundee therefore played nine friendly games throughout the season, the majority of which were after the league campaign and Dundas scored fourteen goals in these games. His strikes included four in a 7-1 win over Strathmore, a counter against Newton Heath (who became Manchester United in 1902) on January 1st, a goal against a side called Dundonians and a hat-trick over Newcastle United.

Dundee also won their first ever silverware in their debut season when they lifted the Forfarshire Cup with a 4-0 win over Dundee Harp in which Dundas scored a brace. Jimmy also scored a double in the 7-3 semi final win over Arbroath and the final at ‘neutral’ Carolina Port was played in front of 10,000 spectators, Dundee largest crowd of the season home or away, at a time when the local cup competitions were considered prestigious.

Dundee’s second year saw another eighth-place finish, another successful re-election and another Forfarshire Cup Final win, this time over Lochee United but for Dundas it was a season in which he scored only once against Clyde in a 4-1 victory at their new home of Carolina Port in August. In an era of little or no tactics, sides simply had one goalkeeper, two backs, three half-backs and five forwards and just went out and played and Dundas, the big-bustling centre with the handle-bar moustache, was often more the ‘provider not the poacher of goals’ according to The Courier as his career entered the veteran stage.

In Dundee’s third year, Jimmy scored the Club’s first ever penalty in a 4-1 home win over Dumbarton on August 24th, 1895, and it is incredible that it took over two years for the Club to win their first spot kick. Dundas scored another ‘pen’ against St Bernards six weeks later as part of his four goals that season, in which Dundee improved their league position to fifth behind the big two Glasgow and Edinburgh sides.

Celtic Park was the venue for Jimmy’s one international honour when on February 15th, he was selected to play for the Scottish League against the Irish League. The Scots won 3-2 in front of 6000 fans and Dundas was one of only three non Celtic players in the Scottish side.

Season 1896/97 proved to be Jimmy’s last as a player when he turned out just eleven times for The Dee and scored his last goal for the Club in a 7-1 Scottish Cup win over Inverness Caley at home in January, his only strike that year.

It wasn’t the end of his association with the Dark Blues however as he stayed on at the Club as a trainer and often ran the line when clubs were regularly expected to provide a linesman. He was joined as trainer a few years later by former team mate ‘Plum’ Longair and the pair were both part of William Wallace’s backroom staff when Dundee won the Scottish Cup in 1910 and can be seen in the famous photograph where the Club shows off the trophy.

He stayed with Dundee until the outbreak of the First World War and his departure from Dens left behind a legacy of eighteen goals in seventy competitive appearances and countless more in friendlies and local cup competitions. Dundas played at a time when our forefathers pioneered the game we love, and he made his mark in the early days of Dundee Football Club as the first in a long illustrious line of Dark Blue Destroyers.