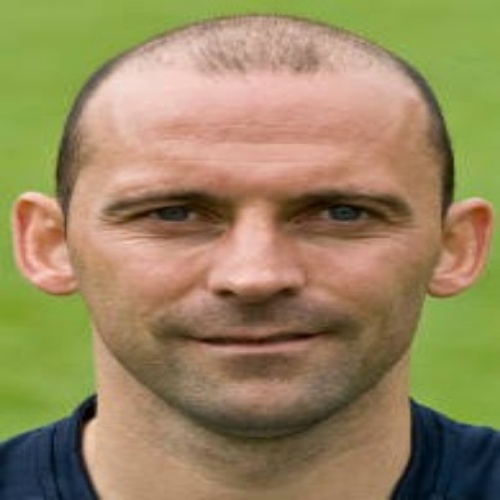 Colin Cameron was born in Kirkcaldy on October 23rd 1972 and started his playing career with local side Raith Rovers. He was brought up in the Links area of the Lang Toun, very close to Stark's Park and attended Balwearie High School in Kirkcaldy from whom he joined Rovers.

Cameron spent most of the 1991/92 season on loan to Irish side Sligo Rovers, before becoming a regular in the Raith side and was part of the team who famously defeated Celtic on penalties to win the 1994/95 League Cup. The following season, he played in both legs of the UEFA Cup tie against Bayern Munich and his time at Raith saw him win two First Division titles (and a relegation in-between) and make over 150 appearances for Rovers before leaving in March 1996.

Cameron joined Hearts for £400,000 with John Millar joining Raith as part of the deal. Like with his previous club, Cameron made just over 150 league appearances, becoming club captain at Tynecastle. The highlight of his stay in Gorgie was undoubtedly scoring the opening goal in the 1998 Scottish Cup Final, which Hearts went on to win 2–1 against Rangers at Celtic Park.

That season had started for Cameron with a goal against Rangers and he had a habit of popping up with crucial strikes for the Jambos with goals against Celtic, Aberdeen and a brace against Dundee United in a 2-0 win at Tynecastle in January.

Colin made his Scotland debut whilst at Hearts and he won the first of 28 caps in a 1-0 friendly win away to Germany in April 1999. He was a regular in the squad for the next five years and scored twice for his country at home to San Marino and Lithuania.

Cameron moved to Wolves in a £1.75m deal in August 2001 and was a fans' favourite at Molineaux because of his effort and determination. With 23 goals in 168 appearances, Cameron was not a regular goalscorer but like at Hearts contributed some important strikes. This included the goal that gave the club their first ever Premier League victory in a 1–0 success over Manchester City and Wolves never lost a match in which he scored. He was a first choice player throughout almost all his time there as he helped the side win promotion to the top flight via the playoffs in 2003, and played for a season at that level before spending two further seasons in the second tier attempting to win promotion back.

By 2006, Cameron's time at Molineux was over, not featuring in manager Glenn Hoddle's future plans at the club and after some time on loan to Millwall, moved to fellow Championship team Coventry City on a free transfer in June 2006.

Colin appeared in most of Coventry's games that season, although mostly as a substitute, scoring two league goals (both penalties), and one from open play in the FA Cup. He suffered an Achilles injury midway through the campaign and managed only two league games in the New Year, before being told he would be released in the summer.

His next move was to League Two club Milton Keynes Dons after a successful trial who were managed by his former Wolves teammate Paul Ince and he signed a contract for the 2007/08 season. He established himself as a regular first team player and helped The Dons to lift both the Football League Trophy after a 2-0 win over Grimsby at Wembley and the League Two title that season.

However, he was not retained at the end of the campaign and he returned to Scotland to sign for another former Wolves team mate in Alex Rae at Dundee. After being plagued by constant knee trouble, Cameron's debut for the club came in a closed door game against Albion Rovers at Cliftonhill which Dundee won 2–1 and he made his competitive debut at home to Dunfermline in September.

In early November, Cameron again injured his left knee and had to spend around four months on the sidelines following a subsequent operation. To help get him back to full fitness and to aid his recovery from the trouble, new manager Jocky Scott sent Colin out on loan to Arbroath for a month in January and he returned to the Dundee first team away at Livingston in February and played seven times before the end of the campaign

At the start of the following season Colin scored his first Dundee goal in a 5-0 League Cup win at home to Stranraer in the first game of the season. He was a regular in the side which romped to the top of the First Division by Christmas and in November he came off the bench in the ALBA Cup Final win over Inverness in Perth to become the first player to win the first player to win the Football League Trophy north and south of the border.

Unfortunately after Christmas Dundee threw away a 15 point lead to finish second behind Caley Thistle and at the end of the season Cameron was one of eight players released from Dens.

In June Cameron took his first steps into management when he linked up with his former Raith Rovers manager Jimmy Nicholl at Cowdenbeath as his assistant while also remaining a player. When Nicholl left for Kilmarnock the following summer, Cameron was named the new player-manager of Cowdenbeath and led the Blue Brazil to the Second Division championship in his first season in charge, finishing eight points ahead of Arbroath.

He left the club by mutual consent in November 2013, as the club struggled during the early part of the 2013/14 season but two months later was appointed player-manager of Berwick Rangers after the sacking of Ian Little. He remained in charge at Shieldfield until October 2015 when he was sacked after a 4-1 defeat to Montrose and is currently in charge Junior club Lochore Welfare from Crosshills in his native Fife.

Colin Cameron had the honour of playing for his country 28 times and finding the back of the net twice.

He won all of his caps while playing between 1998-2004, when he played for Hearts and Wolverhampton Wanderers.