The St Mirren journeyed to Carolina Port on Saturday to meet Dundee In the Scottish Cup ties. A large crowd turned out to witness the encounter.

The Saints were out at full strength, but Dundee were unfortunate in losing the service of Campbell and Fleming, the former having twisted his knee on the previous day, while the latter player was suffering from injuries sustained in the match with St Bernards at Edinburgh on Saturday last.

Prompt to time the teams lined up under the charge of Referee McLeod, Cowlairs, as follows:- Dundee - Barrett; Darroch and Ferrier; Dundas, Longair, and Keillor; Thomson, McInroy, Maxwell, Sawers, and Gilligan.

The Saints lost the toss, and Patrick was early called on to save a hot one from the foot of Sawers.

Soon afterwards Gilligan had a try at Patrick, but the Paisley custodian was all there, and saved smartly. The Dundee forwards continued to press, and the visitors' goal had some narrow shaves, Patrick on two occasions only saving his charge by tipping the ball over the bar.

A smart run by the Saints right wing caused the home supporters some anxiety, but the danger was averted without Barrett being called upon, and the home forwards were once more peppering at Patrick.

Right up to the close of the first half Dundee had all the play, but luck was against them, and the teams crossed over without either side having scored.

The Saints started the second period with determination, and within a minute Barrett had to save a brace of hard shots from the left.

The home men got away again, but they failed to reach Patrick, and the Saints once more took up the pressure. First Mullen and then Connell had a try, the ball on each occasion just skimming the crossbar.

On the kick-off St Mirren played up desperately, and excitement ran high as Barrett turned aside quite a host of hard shots.

Dundee's front line once more asserted themselves, and McInroy and Thomson ran the ball between them to within shooting distance. Thomson centred beautifully, and Gilligan, lying handy, beat Patrick with a splendid shot.

This put the issue beyond doubt, and, though the Saints did not relax their efforts, the home defence held them safe to the close. When the whistle sounded the scores stood-Dundee, 2 goals; St Mirren, nil. 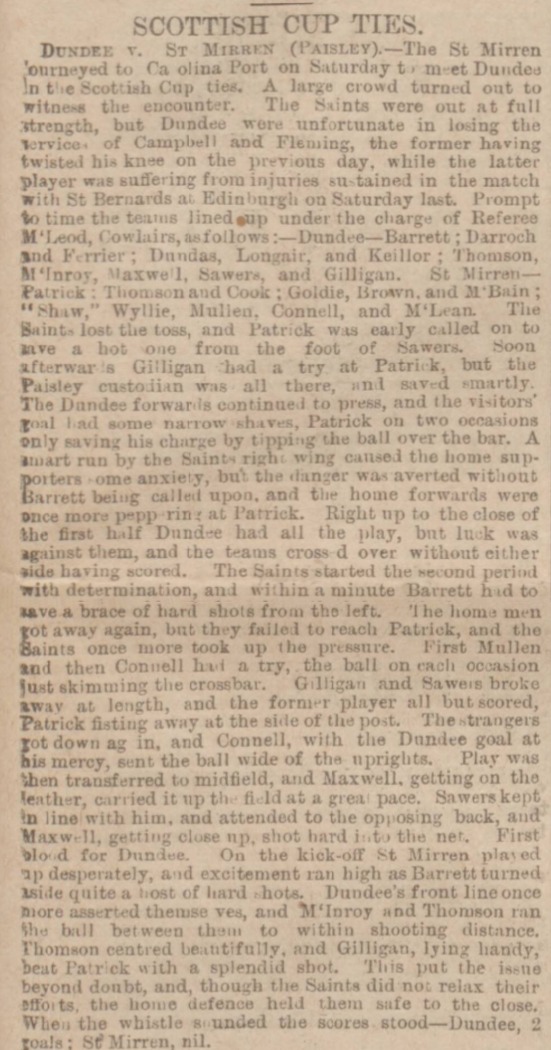