Played at Cattofield, Aberdeen, on Saturday, before a good gate.

Dundee started the ball, which was soon carried into the home ground, where a corner resulted in nothing. Soon after a fine run up the left wing by keillor and Fleming looked like business, but nothing came of it. Some give-and-taka play followed, when another run up the left wing resulted in Fleming, from a pass by Keillor, tipping through the ball nicely.

The Orion seemed to lose heart a bit at this, and had to defend against a heavy attack by the Dundee men, who pressed hard. Shortly afterwards, from a long pass by Keillor, Thomson, with a beautiful long shot from the right wing, scored goal number two for this side.

Some hard work followed, and ended in Maxwell, the Dundee's new centre forward, notching goal No. 3 with a magnificent long shot. Half-time:-Dundee, 3; Orion, 0.

The second period was fast. The Orion played with more spirit, and, though they failed to do much damage, it was not for want of trying hard. They were, however, exceedingly unfortunate at goal.

Edwards, their goalkeeper, played splendidly when his side was in danger. After abont ten minutes' play Maxwell managed to pass the Orion backs, and scored a fourth goal for Dundee. From a corner shortly afterwards the same player put in a fifth goal.

From this the Orion played an aggressive game, and kept the Dundee pretty close. As the result of a close scramble near the Dundee goal Gallagher put the ball through for Orion.

This put up their spirits considerably, but, hard though they worked, they failed to further alter the state of the game, which ended: 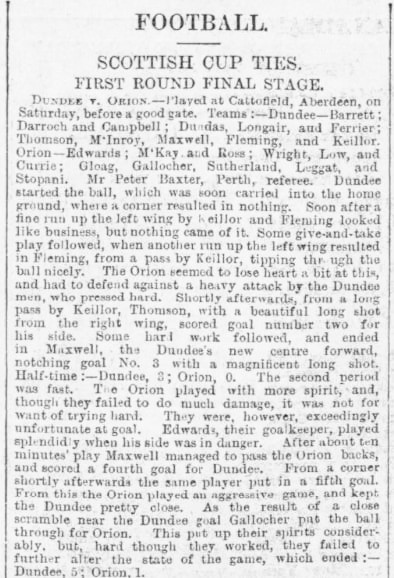