Newspaper extract from The Glasgow Herald.

The last Teague match of the season was posted on the ground of the Clyde before a good attendance.

The teams were:- Clyde - Henderson: Gouldie and Ross: Jeffrey, Morrison, and Hamilton; Crawford and Young, Miller, Wright and Russell.

The weather was warm, and there was no wind to speak of.

Miller kicked off for the Clyde, and the match commenced in earnest.

Dundee caught up the pess, and by some aggressive work they kept the Clyde defense busy, one quick low shot by Longair being just saved in time.

Miller led the Clyde attack by some nice passes out to the wing. Dundee defended splendidly, however, in close quarter, Drummond and Darroch putting in some fine work, and Barrett also rose to the occasion, getting the ball away twice just as it was about to go through.

Miller's play for the Clyde was an outstanding feature, and one tremendously fast shot of his just passed the post.

After ten minutes' plau the Clyde were awarded a penalty kick for one of the opposing halfbacks stopping the ball with his hands. Hamilton took the kick, and sent In a terrible shot. Barrett. however, came out and met the ball, and saved in splendid style.

A half-time neither side had scored.

The game had no sooner restarted than the best opening of the day fell to Dundee, but Lonie tipped the ball past.

The Clyde retaliated in spirited fashion, and Miller was cheered for a grand bit of play. The Dundee forwards were played in better style than they had done in the first half, but unfortunately Thomson, the outside right-winger, met with an accident to his leg, and had to be assisted off the field.

Little Crawford and Young afterwards tried to force the pace for the home team, butt the Dundee half-backs wear resolute in their defence, and were hard to beat.

Gradually, however, the Dundee defence was forced back, and the Clyde peppering away at goal, experienced tantalising luck, until at length, after 15 minutes play, Wright popped the ball throngh, and scored the first goal amid cheers.

Dundee played their very hardest to get better complexion on the game, but the Clyde had them well in hand.

The home forwards, indeed, were displaying any amount of pluck, and Crawford would have increased the score but for Young coming in the way of the ball in the South of the goal.

As it turned out, however, the mistake did not matter much, and Miller, accepting a pass from Russell, scored the second goal for the Clyde after twenty-five minutes.

This practically settled the fair of the match, as Dundee, still with ten men only, and their opponents playing by far the best, could not be expected to keep it up. As matter of fact, the Clyde almost untill the close held the upper hand, and the result of a hard game was - Clyde, 2 goals: Dundee, O. 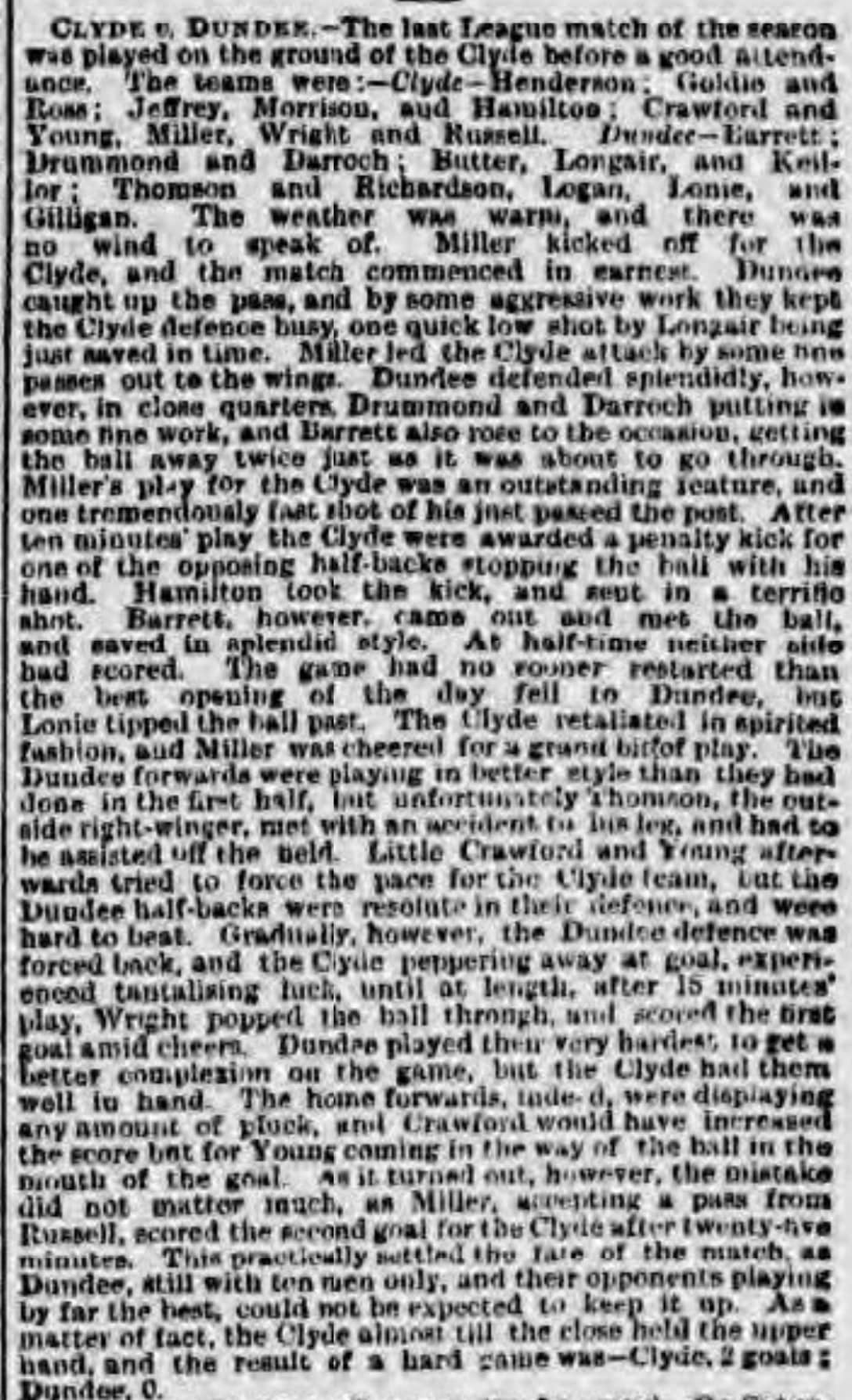