Newspaper extract from The Dundee Advertisor.

At Cathkin Park, Glasgow, Dundee kicked off against a slight wind, and for the first ten minutes had to act almost entirely on the defensive.

In the defence Darroch shone out conspicuously, and on more than one occasion he certainly saved his team from disaster.

At length Dundee forced the first corner of the game, but Gilligan shot the ball over the bar. After 30 minutes' play Dundee scored the first goal. The forwards had a speedy run, and Sawers passed to Gilligan, who shot into goal.

Smith, the Third Lanark left back, meant to turn the ball out, but accidentally sent it through his own goal.

A minute or two later Richardson, with a grand shot scored the second goal for the the Dundee, the ball hitting the post and going through.

The Thirds' forwards had several chances to score, but the Dundee defence was too much for them.

The Dundee forwards were playing very well indeed, and Lonie, who was quite a success in the centre, scored the third goal for Dundee.

Barrett, too, played a very showy game. At half-time Dundee led by 3 goals to 0.

Dundee commenced the second half well, but the Third were the first to score from a splendid centre by Fyfe, Barrett having no chance to save.

The Dundee forwards, led by Lonie, were playing very smart football indeed, and Richardson might easily have headed through and increased the score. Drummond, too, at back was very effective, and Barrett put in a lot of very clever work.

As the game progressed Dundee showed by far the best football, and the wonder is they did not add to their score. Play degenerated somewhat, several of the men losing their tempers, but with a little luck the Third might have increased their score. Result-Dundee, 3 ; Third Lanark, 1. 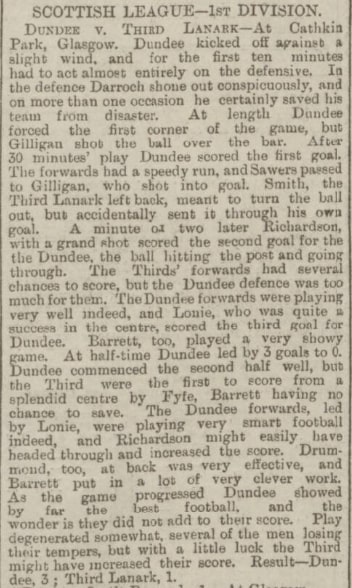