This League match was played at Tynecastle before 4000 spectators.

Dundee started, and play for a while was of an even nature, and both sides on several occasions had to be penalised.

After this state of matters, the Hearts pulled themselves together, and Scott, from a pass of Baird's, opened the scoring.

Again the Hearts surrounded Barrett, and being ably backed up by Darroch and Campbell they managed to stave off the charge. Fleming then changed places with Keillor, but this had little effect on the left wing play, which was decidedly weak.

The Dundee front rank tried hard to make headway, but the splendid half-back play of Hall and Hogy always drew them up. Half-time was then called, the Hearts leading by a goal to nothing.

On resuming the home team again forced their opponents down, and so hard was Campbell pressed that he put the ball through his own goal.

No sooner had this been accomplished than Chambers put through a third point. The Northern men then tried to get away, and Richardson seemed to be the only one inclined to play, but the efforts he made were simply useless.

Baird sent in a stinging shot from the touchline, and Michael, having an open goal, put the ball into the net for the fourth time. The subsequent play was all in favor of the home team, who seemed to do what they liked till the whistle blew Result-Heart of Midlothian, 4 goals; Dundee, 0. 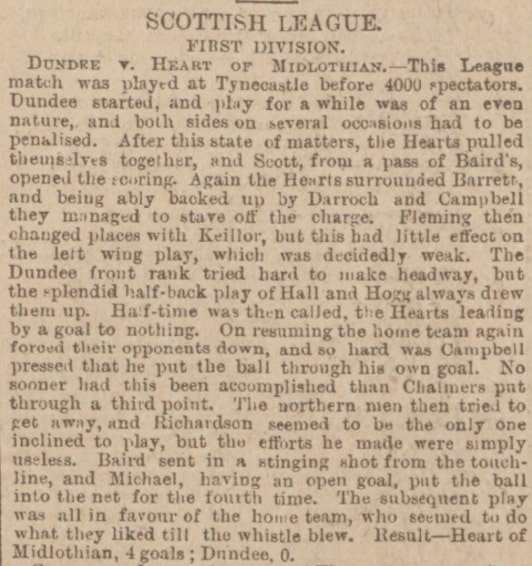