Dundee brought off their postponed League tie with the Heart of Midlothian on Saturday. Unfortunately at the time fixed for the start the wind was blowing with almost hurricane force, and this militated considerably against the atten ance. Nevertheless, by half-time a crowd of 4000 spectators had assembled.

The visitors lost the toss, and Michael set the ball rolling against a strong north-westerly breeze.

The home men were not long in reaching Cox's charge, but the wind carried Sawers' parting shot high over the bar.

Some tricky play by the visiting half-backs let Scott and Walker away on the left. They carried the ball between them the whole length of the field, and Scott shot for goal. Barrett returned smartly, and Darroch getting possession sent the leather well down the field, where it was fastened on by the Dundee left wing.

A stiff tussel took place in front of Cox, and Gilligan had a splendid chance of scoring, but sent the sphere wide of the mark.

From the goalkick the Hearts broke away. Darroch stopped a dangerous rush and kicked back to Barrett, but in holding off Baird he overstepped the limits of fair play, and the referee awarded the visitors a foul.

Russell took the kick, and sent the ball well into the goalmonth, where it bounced among the players' feet for a few seconds, and finally landed in the net.

On kicking off, Dundee came down on Cox in a body, but wild kicking nullified their efforts to score, The wind now lulled somewhat, but Dundee continued to have the bulk of the play.

Bad luck and bad judgment, however, kept them from scoring, and at the interval the Hearts were leading by a goal to nil.

On resuming Dundee came away beautifully, and play for some time was confined to the visitors' territory. The defence prevailed, and the Hearts worked their way eastwards.

The wind at this stage increased in force, and the home goal was closely besieged. The defence was good, however, and for a time defied all the Hearts' efforts. Michael at length found an opening, and sent in a hard shot which Barrett failed to hold properly, and the wind whisked it out of his hands, giving the Hearts their second point.

This quenched all hope for Dundee, but they continued to play up luckily, and eventually the forwards broke away in a promising run.

Battles interposed, but he fouled Richardson badly, and the referee gave Dundee a free kick. A hard scrimmage ensued in the Hearts' goal, but the ball was got away, and play was transferred to midfield.

Shortly thereafter the whistle was blown with the scores standing-Heart of Midlothian, 2 goals ; Dundee, nil. 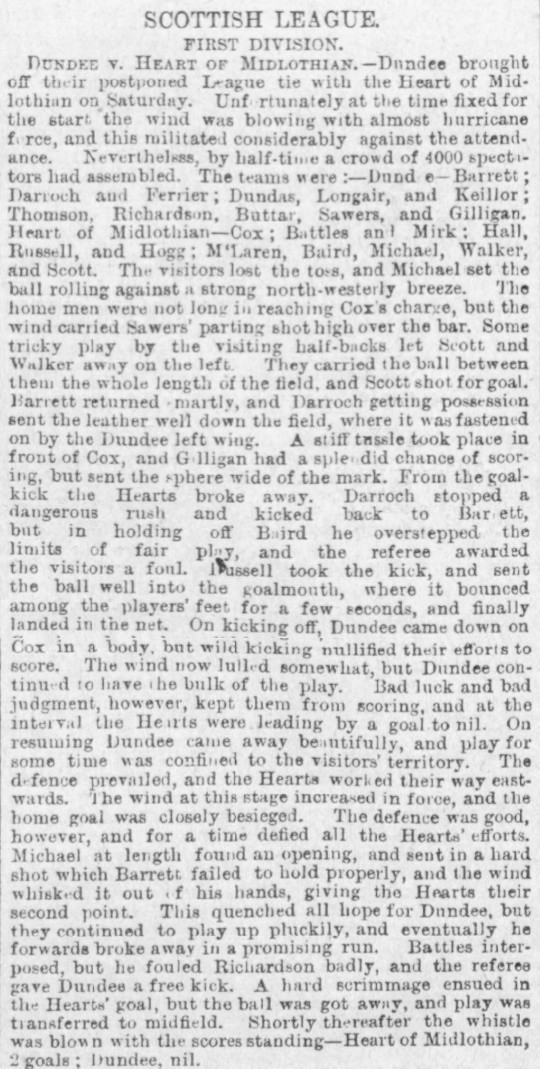