Dundee met 3d LRV. for the first time this season in the League at Carolina Port. About 3000 persons were present. Longair and Campbell were absent from the home side, but Gilligan made a welcome reappearance.

The game opened quietly, but Fleming broke away and centred. Thomson headed in, but Ross clearled smartly.

Bowman relieved a subsequent attack with a strong kick, and L. Bell, getting possession, had a fine run, and, beating Ferrier, centred well, and D. Bell headed an easy goal.

Barrett's afterwards saved several times in good style. Still pressing, the visitors secured a free kick close to the home goal, and, from a scrimmage, D. Bell added a second goal for his side.

The home team improved after this second reverse, and, aided by some capital half-back play by Dundas, the ball was kept near the Volunteers' goal.

Ross was severely tested by shots from Gilligan, Fleming, and Thomson, but he saved them all cleverly.

The game continues fast and evenly contested, both goals being assailed in turn. Near the close of the period, Johnstone, the strangers' centre, twisted his knee, and had to retire. At half-time the score stood-Third Lanark, 2 goals Dundee, nil.

In the second half Johnstone reappeared and took up his usual position. The game was listless for a time, but at length Dundee woke up to their position, and Fleming, Gilligan, and Sawers by a bit of clever passing got down to the strangers' goal.

A scrimmage took place, and Gilligan banged the ball throngh amidst cheers. This success had a wonderful effect on the game, the home team playing ip desperately to equalise, but without success, and the game ended - Third Lanark, 2 goals; Dundee, 1. 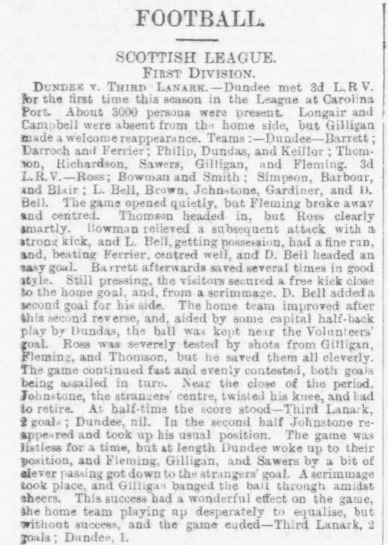