The closing fixture in the Forfarshire Cup competition was fulfilled on Carolina Port Grounds on Saturday afternoon, the finalists being Dundee and Harp.

The entire football interest in the city was centred in the meeting, and in consequence the spectator' accommodation was pretty well crowded. Considering also the numerous gratis sightseers perched on the local Vesuvius, the match was witnessed by no lower than ten thousand people.

Fine weather prevailed and the ground was in fine trim. Dundee were minus four of their usual players, while Harp were at their full strength.

The Dundee were the first to attack, and essayed well, but their old failing at goal was in evidence.

The siege lasted for some time, and Malone was kept busy, but always managed to clear his lines. Thomson and Keillor sent in fine shots, which, however, just missed the opening.

The Irishman had few looks in, but were never really dangerous at this stage. Resuming the aggressive with more vigour than before, Dundee got well in, and a succession of well-direct kicks followed, only to be repelled by the defence. Collins relieved the pressure, and for a few minutes things looked healthier for the Harp, but Brannan failed to improve an opportunity, and the ball was sent behind.

Each team had the advantage in turn, but it was not until the major portion of the first half had gone that the leading goal was put on.

In the midst of one of their more or less protracted tussels in their opponents' territory, the Dundee men got the better of a heated skirmish, and the leather was headed through. Strenuous efforts were made on both sides, in the one case to improve their victory, and in the other to equal, but without avail, and the period ended - Dundee, 1; Harp, 0.

On change of ends, the Harp players made a pinky attempt to pull level. Several splendid shots were delivered, and for a time the defending line were at high tension. Longair relieved well, but the Harp were anxious to improve the occasion and returned to the attack.

Still they were prevented from attaining their end, and ultimately Keillor got the ball away to the west end. A protracted spell of play in the Harp's ground ensued, but again the shooting powers of the Dundee forwards were at fault.

Keeping up their siege, however, Dundee began to show superiority in a pronounced form. From a beautiful pass, Dundas saw the ball through, and Dundee stood 2 up. Five minutes later Keillor, who was showing form style, secured a third point, and any prospect of the Harp pulling up was now gone.

The closing ten minutes of the game saw the play all in favour of the Dundee eleven, whose dashing work was in unequal contrast to the slackness exhibited earlier in the match. Keillor, getting away with a rush, elude all tacklers, passed to Thomson, who, in turn, sent in a rattling shot, and Dundee countef 4.

A few minutes afterwards time was called, the final result being - Dundee, 4: Harp. 0.

Dundee thus, in the first year of the existence of the club, wins the trophy and championship of the county. 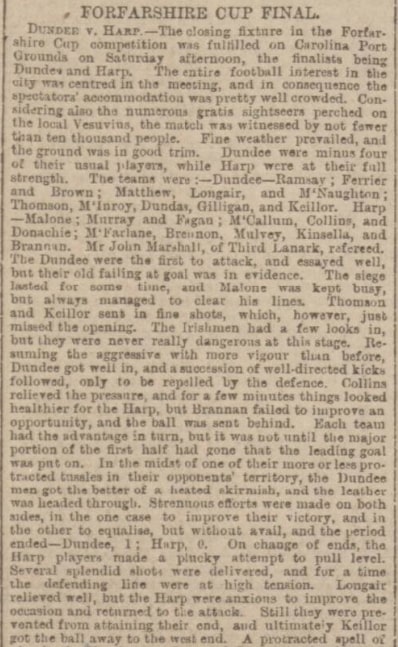