This the most important match yet played this season in connection with the Forfarshire Cup was brought off at West Craigie Park on Saturday.

In the initial stages Arbroath met and defeated Brechin and Dundee Strathmore; while Dundee, securing a bye in the first round, deputed the "A" team to dispose of Kirriemuir in the second. The latter scratches at the last moment, and Dundee entered the contest on Saturday without having played a match.

The weather was all that could be desired, but the ground was some what heavy from recent rains. There was a limited attendance at the start, but before the game was ten minutes gone there must have been over 3000 present.

The contestants were out in good time, and, under the direction of Mr Black, Forfar Athletic, the following players took up their respective positions:- Dundee - Ramsay; Ferrier and Campbell: Craig, Longair, and Petrie; Thomson, McInroy, Dundas, Gilligan, and Keillor.

Promptly at 2.15 Maxwell led off for Arbroath towards the the "farm end'. The opening exchanges were very even, but Arbroath were the first to look dangerous. A foul close in looked well, but Craig relieved, and Thomson and Dundas dribbled north.

Milne, however, held them safely, and a corner off Campbell was remarkably well placed by Petrie, but relief came, the ball going behind. From a good drive by Ramsay, Dundas sped northwards, but Meston intercepted, and, after Ramsay had saved, Suttie clean beat him with a splendid shot, Arbroath securing the first point after eight minutes' play.

Loid cheers from the Arbroathians present greeted this early success, and Dundee renewed with great dash. A foul, close in, was spoiled by a wild shot from Petrie. Immediately after, Thomson crossed well, but Meston saved at the expense of a corner, and Arbroath were again down on Ramsay, but Maxwell shot high over the bar.

Dundee hot north through the efforts of McInroy and Dundas and some cross play near Mann took place. McInroy was tripped right on the line, but Arbroath defended well, and, although Gilligan tried a long drop, the equaliser would not come.

After some open play, Suttie sprinted down the left but Ferrier was safe and Thomson and McInroy dashed along the right, and a magnificent shot by the former, which would have gone through, was made curtain by Keller heading past Mann. Dundee thus drew level

Play was now of a livelier description, and three minutes had only gone when, from a combined attack, Dundas landed a second goal for Dundee amidst tremendous cheers.

Right from the centre kick, without scarely an effort on the part of the home defence, Petrie with a splendid shot which Ramsay was powerless to save had put his team on equal terms, and play became very fast and exiting.

After Dundee had show past at the Avenue end, Maxwell got clear but Longair intercepted. Arbroath, however, came agnin, but Ramsay saved, and then a shot from Arbroath right wing went wide. After Craig had stopped the visitors left wing pair, McInroy (who was playing in first-class style) gave Gilligan a chance, and that player dropped the third goal for Dundee, Dundas having assisted it through.

The interval was just at hand, and, after Suttie had shot wildly over, the suspension came, Dundee leading by one goal, the scores being - Dundee, 3 goals Arbroath, 2.

The second portion of the game opened with Dundee at once pressing. The home forwards continued to harass Man, and four minutes had only gone when, from a pass by Gilligan, Thomson negotiated a fourth point.

This success did not, however, as yet seen to dishearten the seasiders, for they worked hard, and, after some get work in front of Mann, they got well up through Hutton and Suttie, but Campbell returned, and then again the Arbroath defence were having no rest.

At last, however, they got clear, and the whole front line went up in good style. Bearing goal Maxwell promptly got the "netted" a third point for the maroons.

From this point, however, right up to the close, Arbroath were clearly beaten: and, from a thrown-in by Craig, Gilligan piloted a fifth goal.

After Mann had saved a scorcher from Gilligan, Suttle gave the visitors' right a chance, which was not accepted, and Dundee came right away in perfect combination. After some tricky play in front of Mann, Dundas heading home a sixth.

Try as they would, Arbronch could not shake off the combined attacks of the Leaguers, and, nearing the finish, Keillor clapped on a seventh goal.

Arbroath got the ball past Ramsay, but a previous infringement nullified the effort, and, after Dundee had performed the same feat at the other end, the finish soon came, Dundee qualifying for the final, the scores being - Dundee, 7 goals: Arbroath, 3. 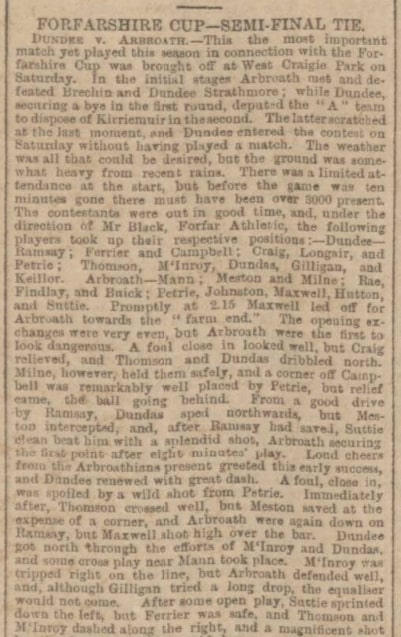