Notwithstanding the counter attractions at Parkhead and Cathkin, there was a capital attendance at Ibrox Grounds to witness this match.

It was Dundee's last fixture in the League tournament, and from the very fact that the West Craigie men had taken a point out of the Cupholders in the initial game, Saturday's encounter was looked forward to with considerable interest.

Mr John Marshall, who should have had the time under his command, was notest, and Mr Frank Watt, of Edinburgh, who discharged a similar duty at Paisley when Dundee met St Mirren's, held the whistle.

The players were out in good time, and when they got into position it was seen that the teams were constituted as follows:- Rangers - Haddow; Smith and Drummond, Marshall, A. M'Creadie, and Mitchell; Steele and Boyd, Gray, Macpherson and Barker.

The coin turned in favor of Dundee, and Gray started the game against a very stiff breeze,

Play was at the Rangers' end for the first few minutes, and it just looked as if Keillor would go through from a pass by Craig, but Smith returned. Boyd and Steele were pulled up by Longair, but the Ibrox men were now going well against the wind, and Barker, baring the ball well played by Gray, beat Barrett after five minutes' play.

The point was to above suspicion, as Barker was well behind Ferrier when he received the ball, but the claim for offside was not allowed. From the centre, McInroy, Keiller, and Gilligan were beating the home defense, but as yet the interational man had not been troubled, the shooting being very far off.

After a try by Keillor, which was saved by Smith, McPherson and Barker went prettily up the left, but the former send the ball behind. Craig at the other end dropped a long one over the bar. The Rangers left-wingers were in capital form, but Craig was doing a lot of clever work, and they never really got dangerous.

From a combined effort on the part of Dundas, Gilligan, and Keillor, Thomson got a chance, which, however, was not accepted. The West Craigie forwards were certainly playing well at this time, and Dundas all but scored from a corner. The Rangers got clear, and, getting well in front of Barrett, Boyd landed a second point for the light blues.

One minute later Thomson missed a very easy chance close in. Dundee did a lot of pressing at this stage, bit a sound defence prevailed. Keillor shot outside and Gilligan dropped one high over the bar three seconds later. McPherson and Barker got the play towards Barrett again, and Marshall had a throw in, which, however, was of no avail.

A corner off Craig also proved abortive, and then Keillor had a great struggle with Smith, the Ranger just stopping the Montrose man in time. Ferrier stopped a rush from a half-back dribble by Mitchell, McCreadie, and Marshall, and then McInroy close on Haddow fouled.

It was nearing the interval now, and Dundee were going fairly well. McInroy ought to have accepted a pass from Thomson just in front of Haddeow, but his effort was extremely wide. Then just on the back of this McInroy was deliberately tripped up by M'Creadie when the Dundee man was making good progress.

Both teams wore showing good football at this stage, and Longair in dropping over to Thomson was just a trifle wide. Thomson got clear on the right, but Mitchell intercepted, and Gray almost imediately sent one past Barrett, which went far outside the mark. Before the interval Dundee had the better of the exchange but the breathing space came without further scoring, the position being -Rangers, 2; Dundee, 0.

The second portion had not lasted many minutes when the Rangers' front rank were down on Barrett. The old Harpist saved a likely try by Gray, but McCreadie placed a third point for the Rangers after some six minutes play.

Dundee were now contending against the elements, and Ferrier, Campbell, and Barrett were having a warm time. Longair time after time stopped some various rushes by the home front, but Mitchell, getting through, sent in a " clipper," which Barrett could do nothing with, and Dundee were now 4 goals down.

Their efforts, however, were not relaxed, but two minutes later a fifth point was registered, Ferrier, in attempting to save, placing the ball round Barrett. Longair, from a good position, shot very wide, but the same player two minutes later gave Keillor a chance, which, however, went outside, Boyd at the other end clapped on a sixth point for the Cupholders.

Almost immediately, however, Gilligan, after a supreme effort on the part of Dumdee's front line, sent a good one past Haddow, and play was more exciting afterwards.

Two minutes later the International goalkeeper was beaten for a second time. McInroy, working the ball clear, passed to Gilligan, and Keillor, from the latter's cross, had no difficulty in placing through.

The Rangers were not, however, content with this state of matters, and they played desperately hard. A feirst scrimmage in front of Barrett resulted in a seventh point for the Ibrox players being sent home. It was now only some eight minutes from the finish, and the rain, which had kept off till this point, began to fall very heavily. The end came, however, without further scoring, the result being :Rangers, 7; Dundee, 2. 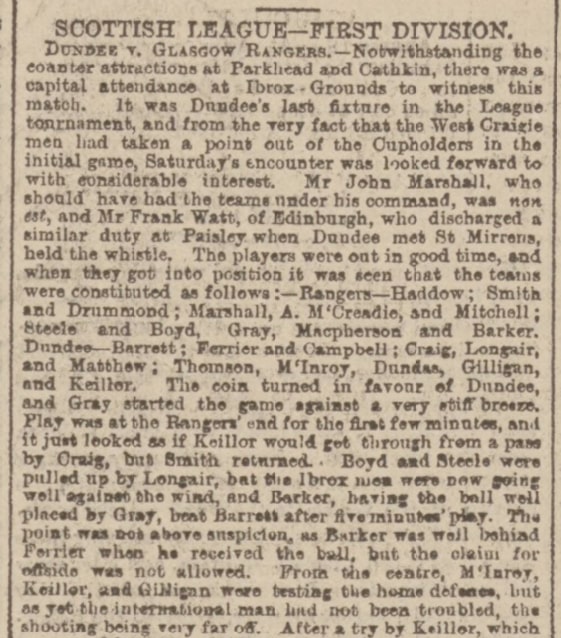