While the important League fixture between the Dundee and the St Mirren was being decided at West Craigie Park, another team representing the Dundee met the Strathmore on Carolina Port in the second round of the Scottish Cup ties.

The attendance was exceptionally small, the more important contest at West Craigie being the centre of attraction for most of the football enthusiasts in the city. Owing to the showers of rain in the forenoon the ground was rather soft and some what slippery.

Shortly after four o'clock the teams took their places, the following being the players:- Strathmore-Coventry: McIntosh and Roberts; Ireland, McHardy, and Dye; Peat, Falconer, Willocks, McHardy, and Wishart.

Winning the toss, Dundee chose to defend the west goal. The stripes immediately pressed and succeeded in securing a corner, but this resulted in nothing. The Strathmore afterwards paid a visit to their opponents territory, but were soon repulsed, and a fine run along the field resulted in McInroy sending in a shot which beat Coventry.

Resuming, the ground team attacked and secured a foul, but the ball was sent high. T. Peat a little later ran away with the leather, but he ended in sending the ball wide of the posts. Some give-and-take play followed, neither of the teams appearing to gain any advantage.

Ultimately, Dundee made a sharp attack, and on several occasions looked like scoring, but Coventry saved in splendid style.

The ball finally finding its way to Peat, that played had a brilliant run west and, passing the leather in front of the posts, G. M'Hardy succeeded in equalising.

For fully five minutes afterwards, the play was mostly in favour of the stripes, but the Strathmore, putting on a spurt, missed several attempts at scoring. On one occasion Willocks landed the ball in front of the Dundee's citadel, but Peat muddled.
Shortly before half-time the Dundee made a vigorous onslaught on their opponents, and Wilson was fortunate to secure a second point for his club.

The game had scarcely been restarted when the stripes again pressed, and a scrimmage instead at the Strathie's posts, but Coventry again proved himself an expert goalkeeper.

On resuming the Dundee assumed the aggressive, but they were soon forced to retire, and within two minutes of the start G. M'Hardy succeeded in again equalising the match,

Aided by a strong north-west wind, the blues continued to press. For some time the game was almost entirely contained to the visiting clubs territory, but the Dundee ultimately broke away. Carrying the ball west, they gave the Strathie some hard defensive work. Eventually the ground team fired their opponents back, and an exciting scrimmage was witnessed at the Dundee's upright, which terminated by the ball being sent home. The Strathie, elated at their success, worked well together, and kept up the siege.

A corner was awarded them, but McIntosh shot too high, the leather just clearing the crossbar. Nothing daunted, the blues invaded vigorously, and a fourth goal was registered by G. M'Hardy.

The remainder of the game was almost entirely in favour of the Strathmore, and just as time was called Ireland scored with a fine shot, but the goal was disallowed by the referee, who held that the whistle had been blown before the ball went through. 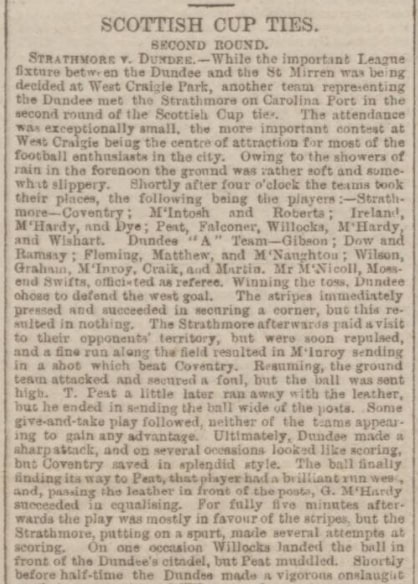