The 3d L.R.V. appeared at West Craigie on Saturday to fulfil their return engagement with Dundee. The two points which fall to the team who manage to "scrape" through were badly wanted by both contestants. So it was not surprising that there was a capital attendance present to witness the encounter, Dundee changed their half-back line, Craig appearing on the right and Matthew stepping over to Petrie's place on the left, the latter having been left out for the day.

The "Third" were as advertised with the exception of Kirkwood, for whom Munn appeared, Stevenson taking the outside position.

The ground was very soft from the previous day's rain, but the weather at the start was of the genuine football order. The appointed referee - Mr Richardson (Heart) - failed to turn up at the advertised time, but Mr D. Stiven, who had taken charge of the game, had just got the players into position when Mr Richardson entered the enclosure. The old Strathmore man was heartily cheered on retiring, and the game was at once started, the following players doing duty for their respective sides:- Dundee - Barrett; Ferrier and Brown; Craig, Longair, and Matthew; Thomson, McInroy, Dundas, Gilligan, and Keillor.

The coins face went in favour of the "Warriors," and Dundas started towards the south goal with a slight breeze in front. It was early seen that both teams meant business, for there was no mistake about the play to begin with.

Cleland and Johnstone were soon at work, but Ferrier was quite safe, and then, just by the way of putting the spectators in good humour, Longair dropped a long one over to Keillor, and Dundas taking up the latter's pass, scored inside five minutes.

This apparently was just what was wanted to make the game exciting, for the visitors played very hard afterwards, and Ferrier, Brown, and Barrett were kept busy.

Boyd, Cleland, and Stewart were moving in good style, and, after Ferrier had stopped a rush, Thomson had a chance through McInroy, the latter's efforts being most praiseworthy. The International man, however, was playing in good style, and his work in goal was very well executed. There was a deal of very even play, and neither side held the advantage, but the game was made equal from a combined run on the part of the "Third's" front line, when Johnstone, getting through from a pass from the right, beat Barrett with a love shot, the game being some thirty minutes old.

Play was fast and even afterwards, and some pretty work was done by both forward divisions. Barrett cleared a long shot from Cleland, and then Dundas, in conjunction with Thomson and McInroy, went the whole length of the field.

It was a nice piece of play, and Thomson's final effort went sure and straight but wilson saved. Nearing the interval play was not quite so fast, the heavy ground taking a lot out of the players. McInroy had a try just on time, but it went for nothing, and when the game was suspended neither side held the lead, the scores being - Dundee, 1; Third Lanark, 1.

The second portion was begun without delay, and in the midst of a heavy snow shower. Dundee were the first to get moving, but Dundas was not up in time to convert a long try by Keillor. The "Third" went about their work in good style, but Matthew and Ferrier were in superb form, and the visitors could not gain the ascendancy.

From a foul close in, Keillor shot wide. Craig stopped a rush by Stewart and McInnes, and then Dundas got clear, but Smith played into touch. The warriors" were trying very hard for the leading point, and a foul just on Barrett looked well. This was placed behind, however, and Gilligan and Keillor got north, but Stevenson pulled them up.

It was close on time now, and the game was still level. There was great excitement when Wilson was called on to save a good shot from some cross play right in front, but he cleared, and Barrett stopped a very warm one from McInnes at the other end. Play continued even till the finish, but there was no more scoring, and the game, which was hotly contested throughout, ended Dundee, 1: Third Lanark, 1. 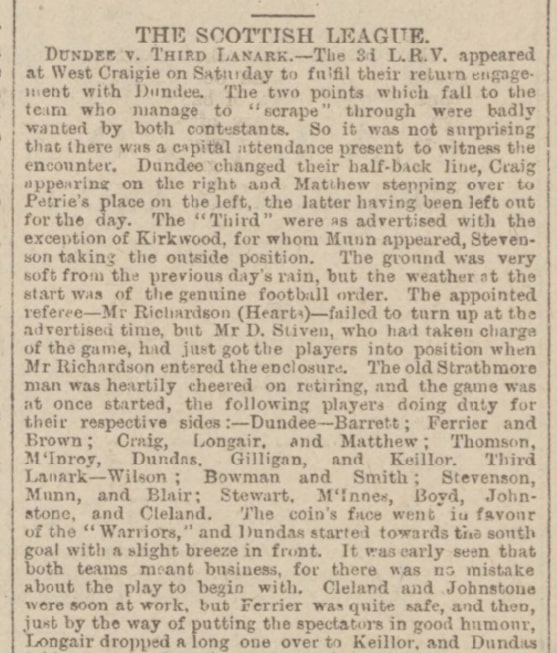