The Dundee team, with Messers Forbes, McLean, and Hill in charge. was forward in good time on Saturday morning, and Glasgow was reached at one o'clock. The team and officials dined in Ancell's Rooms, and Paisley was reached about 2.30. The storm, which had played sad havoc with the St Mirren's grand stand, was just about sent, and when the teams entered the enclosure the rain had cleared off, but the ground was in anything but a playable condition.

Mr Frank Watt, Edinburgh, had the players under his direction, and, on Longair winning choice, ho lost no time in getting the game started. The contending teams were constituted as follows:- Dundee Barrett: Ferrier and Brown; Matthew, Longair, and Petrie : Thomson, McInroy, Maxwell, Dundas, and Keillor.

There was some sensational play at the start, and, after Mullen had placed behind, Fyfe from a good position clapped on a goal for St Mirren within two minutes, Dundee were going well, bowever, and the equaliser came from Mclnroy, who beat Patrick with a perfect shot just on the outside of a scrimmage.

Andy Brown placed behind from the centre, and then St Mirren did a lot of pressing right in front of Barrett, and Bell put on a second goal for the "Buddies."

Play was very even for a time, but the heavy ground was all against Dundee, and Keillor fouling close in Wylie beat Barrett for the third time, the last-mentioned having no chance to save, owing to the heavy nature of the ground. Then just on the interval Brown, from centre half, dropped a fourth point for the homesters.

Keillor got through a second for Dundee, but the point was disallowed for offside, and five minutes later the whistle blew, the score being-St Mirren, 4 goals: Dundee, 1.

The second portion was not long started when Petrie had a try, but the shot went wide. Matthew, who, by the way, was playing in brilliant form, put in some very fine work at this stage, but his efforts could not withstand a rush by Mullen and Brash, and Wylie, from a pass by the latter, put on a fifth goal. Almost immediately, however, Matthew landed a second goal for Dundee, which was, perhaps, the best-taken goal in the match. It was a grand effort and well worthy of a goal, although the point was received in silence by the spectators.

Dundee played up better after this success, but Brash, getting through, record a sixth goal for his side, and the play still favoured St Mirren. Barrett had a lot to do, and he did it well, but he got no rest.

Maxwell got clear, and from a grand cross by Keillor, Thomson just missed scoring, the bail rebounding from the post. From a combined rush by the home men Barrett was beaten again, but, just by way of retaliation, by a combined effort on the part of the Dundee forwards, Maxwell shot a third goal for Dundee.

Just on time Brash put on a ninth point, and Bell negotiated a tenth goal against Dundee. Before the ball was again placed the whistle sounded, Dundee sustaining their heaviest defeat in the League tournament, the score at the finish being--St Mirren, 10 goals; Dundee, 3, 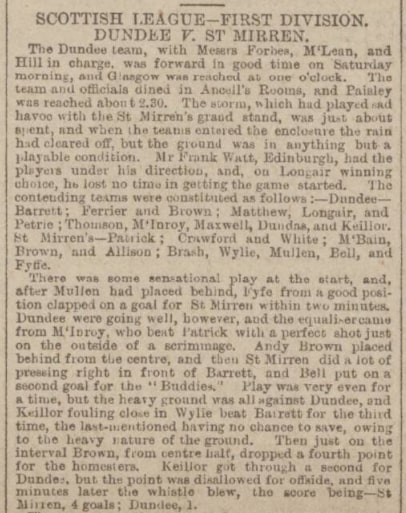