Notwithstanding the cold, bleak weather on Saturday, the League fixture between these teams drew a crowd numbering several thousands to West Craigie, and the game, although it turned out to be a one-sided affair, was by no means devoid of interest, particularly in the first line.

Dundee kicked off against both incline and wind, but this notwithstanding they were the first to invade, although the attempt was abortive. After a look in by Renton, Dundee returned and obtained a corner.
The visitors cleared, Davie making quite a reputation for himself by his smartness between the uprights.

It was apparent, however, that the West Craigie men were outplaying their opponents, and after fifteen minutes had elapsed Keillor led away beautifully.
The other forwards followed up, and Dundas scored from an accurate pass. Dundee followed up this success, the forwards passing the ball from wing to wing with amazing precision. The Renton back division were hopelessly unble to cope with this kind of work, and Thomson beat Davie for the second time. Though two goals behind, the Renton fronts did their utmost to get away, but they were kept in check, and for a time play was almost wholly in the Renton territory.

Several easy chances were thrown away by Dundee, but before the interval Mcinroy was responsible for a third goal, and this was the state of the poll when the teams crossed over.

The second half had hardly begun when the Renton custodian was hotly besieged. Quite a plethora of shots were negotiated by Davie, who was warmly cheered. Although the defence of the Renton was all over strong, it was not equal to the task of controverting the Dundee front rank, and a fourth goal was soon registered, the ball passing through off one of the visitors' backs.

Subsequently Dundee had the game almost wholly to themselves, the visitors being pinned to their citadel. The feature of the game was the splendid work which Davie continued to undertake.

Several corners were conceded to Dundee, but these were not turned to account. Immediately afterwards Dundee scored twice in quick succession, Matthew and Keillor doing the needful.

A seventh and eighth soon followed, and then Dundee began to take matters easy.

They could certainly have increased their total, but the forwards appeared to prefer to amuse themselves, and, taking advantage of this, the Renton forwards rudely awakened the home eleven by rushing to Barrett's charge, where Gilfillan had no difficulty in scoring. No sooner had the ball been kicked off again than the whistle sounded, and the match ended in a victory for Dundee by 8 goals to 1. 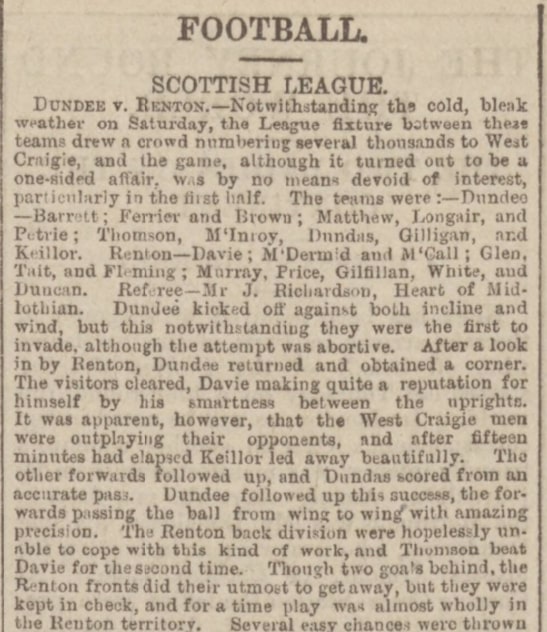