Much interest was taken in this match, which was played at Logie Green, Edinburgh, on Saturday. From a Dundee point of view, the match was of the greatest importance from the fact that to lose the match would almost certainly place them in the last three, while to add another two points would place them in a position to be able to clear the hurdle.

The Saints, having defeated the Dundee away, were confident of again doing the needful. There was a fair attendance of spectators, but the ground was in somewhat slippery condition, owing to the heavy rain which fell in the forenoon. Both teams were somewhat altered from that originally chosen.

Longair won the toss, and played with the aid of a gutsy wind. The Saints kicked off, and were at once surrounding Barrett. They were, however, driven back, and when close up Keillor compelled Baillie to grant a corner.

This was well placed, and a shot skimmed the post. Give-and-take play followed, but the Saints forwards were more dangerous than the visitors, and although Keillor tried Baillie with shot, which the veteran just cleared and no more, the home team gradually made things warm, and after five minutes play Laing was successful in eluding Barrett.

Responding to the calls of their supporters, the Saints kept Barrett lively, while Ferrier was cheered for smart tackling. Up to this period the Edinburgh men had the most of the play, and only once was Dundee dangerous, but Baillie cleared grandly.

Barrett and his two backs were doing yeoman service for Dundee, some of Barrett's saves being almost miraculous. Thomson and McInroy now got into their stride, and starting a run along the right they brushed past all opposition, and Thomson centring, Ritchie had no difficulty in placing matters level.

Play now became faster, and the visitors' forwards were combinding better, and in consequence were more dangerous in their attack. From one of their raids the ball was shot into Braille's hands, and before he could clear, Thomson banged ball and goalkeeper into the net, and at half-tine Dundee were leading by 2 goals to 1.

With the wind in their favor, it was expected that the St Bernards would win hands down, but an suprise was in store.

From the very start, the Dundee forwards showed surprising form, and, combining well, pressed the home defence severely. Keillor was prominent on the left, and getting well in, and passing judiciously to McInroy, the latter scored.

From the kick-off the Saints attacked, and Barrett had an anxious time. He, however, saved magnificently, and, the ball being kicked behind, raised the siege. Returning again to the attack, Crossan with a fine shot put through number two for the homesters

Ding-dong play followed, both sides having about equal play, and although Dundee, through Ritchie, again scored, offside was given.

A foul at the other end for tripping was well taken by Arnott, but the ball went through untouched. Some grand tussles between Keillor and Arnott on the one wingand Thomson and Foyers on the other took place, and from a corner. McInroy headed through goal number four for Dundee.

A fine dodgy run by Brady and Crossan was successfully stopped terrier, but Wilson shot in, and Crossan headed through, Barrett apparently looking for the ball to go behind.

Time was now wearing on, but Dundee were not yet finished. Keillor, eluding Murdoch and Arnott, centred the ball. Baillie ran out to save. He was, however, successfully tackled by McInroy, who passed to Thomson, and that player had no difficulty in putting through. The game to the finish was hard. 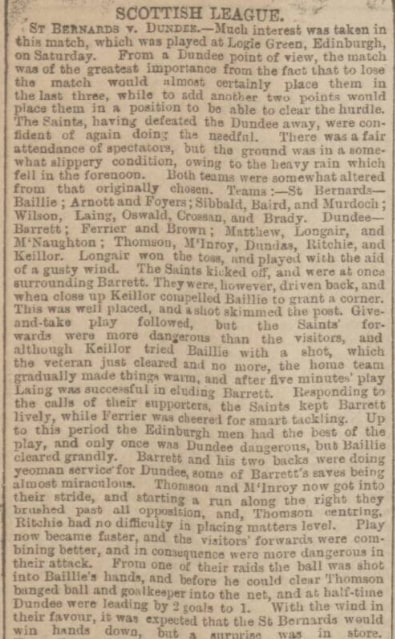