The second visit of the Dundee combination to Edinburgh created considerable excitement in local football circles, and, not withstanding the early hour of start, there was a large crowd of spectators at Tynecastle when the teams appeared.

Both teams were out at full strength, Begbie, Taylor, and Walker appearing for the Hearts, while Barrett defended the visitors' goal.

The teams were therefore as follows:- Dundee-Barrett; Ferrier and Campbell; Craig. Longair, and Petrie; Thomson, McInroy, Dundas, Gilligan, and Keillor.

The Hearts won the toss and Dundas started for Dundee. The left wing of the home team immediately settled on the ball, but Longair tackled them, and with a long drive sent the ball well up. Keillor got on, but Adams had no difficulty at clearing, and magnificent play by Taylor and Chambers fairly baffled the Dundee defence. Petrie could do nothing with them, and play for a while was in close proximity to Barrett.

The old Harp, lad, however, cleared in a style worthy of his reputation, even though at times roughly handled by Michael, the Hearts centre. Ferrier was also showing good form, and it was mainly through his efforts what the pressure was relieved. The game for a time was fairly even, but a magnificent run by Baird raised the enthusiasm of the crowd. Craig tried vainly to stop him, and almost from the touch line he sent the ball whizzing into the net.

After this reverse Dundee pulled themselves together a bit, and for a while play was pretty near the Hearts' goal. Fairbairn had several shots to fist out, but he was never really pressed, Adams and Begbie easily holding Keillor in check. The game did not long remain n this vicinity, and brilliant work by Taylor and Chambers made things look black for Dundee, and on two or three occasions the former sent the ball within an ace of the post.

Longair was frequently penalised for rough work, and a free kick a few yards from his own goal further enhance the Hearts' prospects. Begbie placed the leather well in the goal mouth, and a misunderstanding between Barrett and Ferrier enabled Walker to head the ball into the net.

Until the end of this half Dundee are simply not in it, the ball always remaining near their own goal. Taylor, Baird, and Chambers all shot wide of yhe mark, and had they been a little more careful another couple of goals would have fallen their way.

Just on the interval Keillor headed a rush on the Hearts' goal, but a fruitless corner was all that resulted, and the interval found the score standing-Hearts, 2 goals: Dundee, nil.

The poor play of Dundee in the first half was freely commented upon, and certainly up to this point they had not shown form up to their reputation. The Hearts opened the second period with ten men, Walker not putting in an appearance owing to an injured leg.

The opening stages were all in favour of the West Craigie men, and Thomson was loudly applauded for a splendid shot. Fairbairn had great difficulty in getting it away, and, encouraged by some of their Edinburgh well-wishers, Dundee kept up a hot pressing. They were playing in determined style, and it looked odds on them reducing their upponents' lead.

Several fouls, however, against Longair - to whom Mr M.Laughlin gave words of advice - brought relief to Tynecastle, and another magnificent run by Baird caused tremendous cheering. He sprinted down the touch line, and, although Craig and Ferrier hung on to him, he managed to get the ball well in.

The remainder of the Hearts forwards were hanging around Barrett, and Chambers had no difficulty in scoring the third point.

The play which followed was of the most exciting description. Taylor, Chambers, and Baird simply made rings round the Dundee's defence, and Longair was often on the ground than on his feet.

Shot after shot was sent into the Dundee custodian, and how the goal escaped was a mystery. Barrett was truly playing a magnificent game, and, although he was charged several times into the net by Michael, he had the satisfaction of keeping his goal intact. The pressure was at last relieved, and Keillor got clear away, and had a big lead of Adams.

He seemed certain to score, but the Hearts flyer recovered himself, and managed to ground Keillor before he had time to settle for a final effort. In the closing stages Longair put in some excellent work, but he kept his side Cfrom scoring by paying too much attention to his opponents. Until the close the Hearts easily held their opponent in check, and no further scoring taking place, the game ended-Hearts, 3 goals; Dundee, 0. 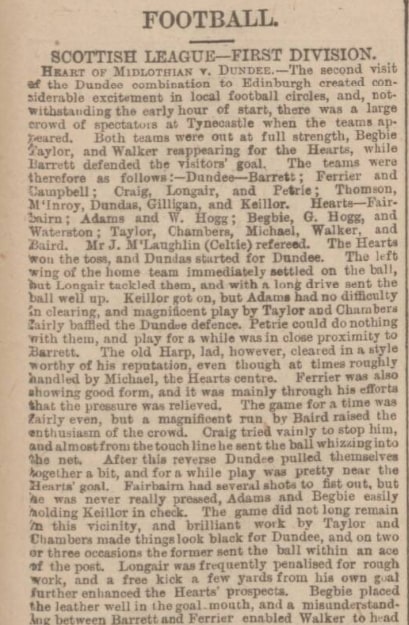