Leith Athletic travelled to Dundee on Saturday to play off the return fixture in the League championship. As it was believed that the match would be a close one, and that Leith would endeavour to wipe out their last reverse, there was a big crowd at West Craigie, including a strong contingent from Leith.

With the ineline against them, Dundee kicked off. Without loss of time Leith took the game in hand. A corner was gained, and melee in front of the Dundee uprights resulted in the ball being scrimmage through. Leith forwards again got possession and Ross shot accurately. McKie knocked the ball out, but the referee held that it was through the goal, and, although the game was hardly three minutes old, Leith was leading by two points.

Subsequently Dandee attacked, and, Longair shooting, the ball rolled across the bar and went behind. Keeping up a brisket pressure, Sneddon was severely taxed, and had to fist out a number of shots in rapid succesion.

Latterley an opening was found. McInroy beating the custodian with a low swift shot. The pace was forced and the Dundee fronts did their most to reduce the lead. They certainly had hard lines, the ball being nearly through more than once.

Leith retaliated. A long shot was tried and McKie tried to save in a dangerous way. He actually attempted to return the ball with his foot, though he had abundance of time to catch it.

The ball when high in the air and dropping behind, a corner fell to the Leith. Although this was not converted, the Leith men compelled Dundee to play on the defensive. While their efforts were futile for a while, Charles Henderson succeeded in finding a loophole for the ball, and the strangers were again leading by two goals.The total may have been augmented shortly afterwards, but Henderson miscalculated his position and threw away an excellent chance. Keillor tried to retrieve the fortunes of Dundee but without success.

In the next onset more Iuck attended the efforts of the local men. Sneddon succeeded in returning one from Gilligan, but Craig followed with a magnificent shot, and the ball went flying through. At half-time the scores stood - Leith, 3; Dundee, 2.

With the timeline in their favour it was expected that the Dundee would soon make up the leeway of one goal against them. The opening stages were, however, in favour of the visitors, and a shot went over the bar.

The home team then woke up, and a corner secured. This came to nothing. Two fouls in rapid succession fell to Dundee for tripping, but both were cleared. Dundee were pressing well, but grand goalkeeping on the part of sneddon barred all efforts to success.

The strangers then shook off their opponents, and getting north were awarded a corner. This was fruitless, and although the pressure was well sustained the homesters gradually worked their way south, and Longair kicked behind. Ultimately from a foul - Thomson being tripped close at goal - Dundee equalised.

Starting with renewed vigour, Leith quickly secured a corner. This was, however, kicked behind.

Returning to the attack, Dundee had hard lines in not scoring, a terrific shot from Keillor striking the bar and rebounding into play. Play was proceeding in ding-dong fashion, Dundee if anything having the best of matters, and at last Gilligan, Keilior, and Dundas by some fine passing noticed another point for Dundee. With five minutes to go things were looking rosy for Dundee, who kept up the siege to the last, and won a hard game by 4 goals to 3. 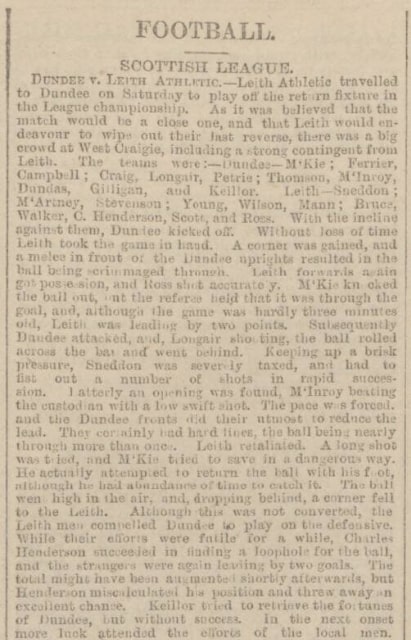