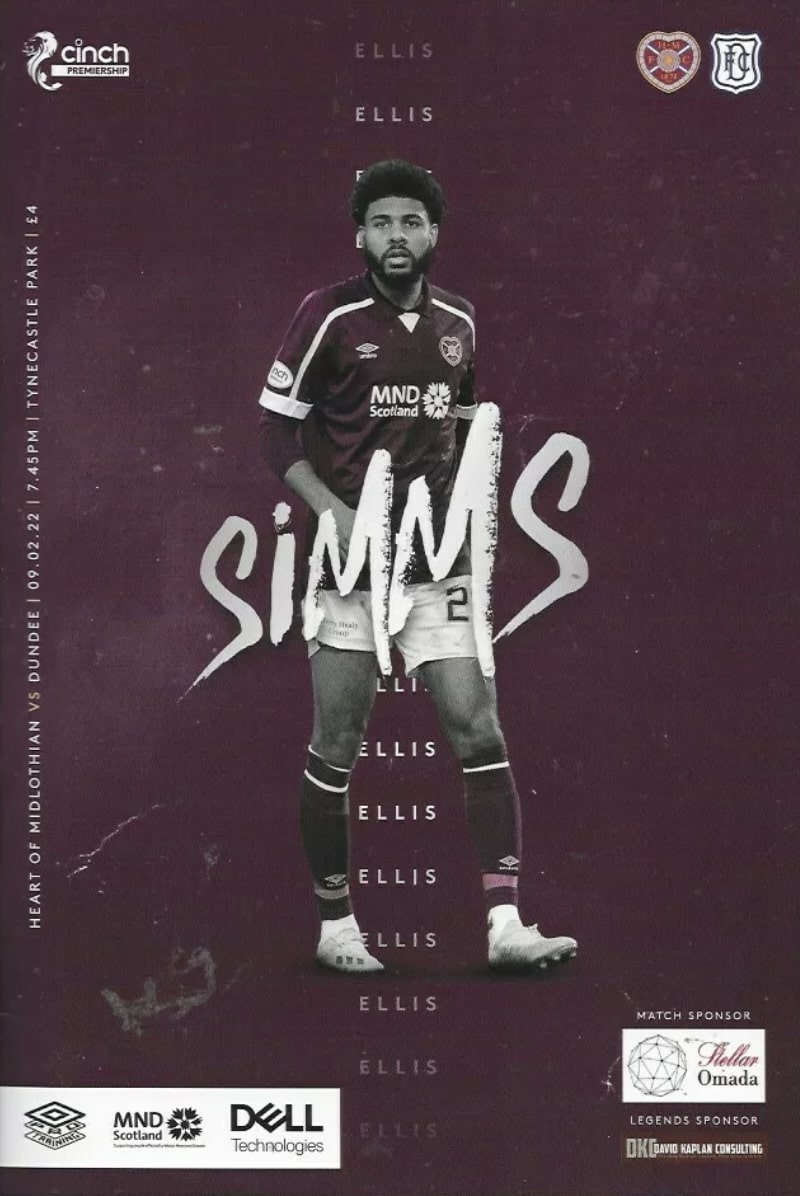 Dundee put in an excellent battling performance to come from behind and beat Hearts 2-1 at Tynecastle tonight. Ellis Simms put the Jam Tarts ahead midway through the first half. The Dark Blues fought back and were rewarded with two second half goals. Danny Mullen equalised shortly after half time and scored the winner after 78 minutes. The Dee then held coolly onto their lead to take a deserved win.

There were four changes to the Dee team. Ian Lawlor replaced the injured Adam Legzdins in goal. Charlie Adam and Danny Mullen returned to the starting eleven, and Josh Mulligan made his first league start for the Dark Blues. They replaced Max Anderson and Niall McGinn, who were on the bench, and the suspended Vontae Daley-Campbell.

Hearts did most of the early attacking but without creating any real danger. The most worrying moment in the first 15 minutes came when Ian Lawlor dropped a cross. Fortunately no Hearts players had followed in and he had plenty of time to recover.

The Jam Tarts were dominating the early midfield battles and started to look increasingly dangerous. Most of the threat came from Barrie McKay searching for space behind the strikers and infield from the right wing.

After 18 minutes McKay found a shooting opportunity on the edge of the penalty area and Lawlor did well to push his powerful shot away for a corner.

The opening goal was delayed for only three minutes. Hearts broke quickly out of defence and McKay raced over the half way line. He glided past Liam Fontaine and sent Ellis SIMMS into the box to score with a fierce shot that flew through Lawlor’s legs.

Ten minutes later McKay came very close to making it 2-0. He nipped past the Dee defensive line to take Peter Haring’s pass and lobbed Lawlor. It looked a certain goal but Ryan Sweeney raced back to clear off the line.

McKay came close again after swapping passes with Ellis. Lawlor saved and managed to push the ball round the post before Ellis could follow up.

As the first half wore on Dundee started to get to grips with Hearts attacks, and restrict McKay. The Dee started to come forward more confidently had some promising approach play. Zak Rudden provided some good hold-up play, turning his marker and linking up well with Mullen.

The hard working Dee forwards started to force errors from Hearts defenders. Rudden and Mullen both had shooting opportunities, but without giving Craig Gordon serious problems. The best effort came from Paul McMullan who ran in from the right to test Gordon with low shot at the end of good play by Rudden and Adam.

The half finished with the Dee on the attack and winning a series of corners. The referee, Colin Steven, chose a bizarre moment to blow for half time, as Cammy Kerr was in the act of shooting following a corner. Gordon avoided any controversy by saving at full stretch.

Hearts were quickly onto the attack when the second half started, but without troubling the Dee. It was the Dark Blues who threatened first when a clever free kick by Charlie Adam found Rudden in space. The young striker’s angled shot lacked the power to get past Gordon.

The equaliser arrived six minutes after the restart following good play down the right by McMullan. MULLEN got on the wrong side of Peter Haring to take the pass and he whipped in a cross-cum-shot that deflected off Sibbick and into the roof of the net past the helpless Gordon. If Mullen’s effort had not gone in there might have been a penalty and red card. Rudden was racing into the goalmouth behind Gordon and was pulled down by John Souttar.

Hearts responded by putting the Dee under fierce pressure. Ellis threatened to restore the Jam Tarts lead within a minute of the equaliser when he found space on the right of the Dee penalty area, but Lawlor made a vital save to keep the Dark Blues on level terms.

The pressure was intense for a few minutes and Lawlor again made a crucial interception to touch McKay’s fierce low cross away from Boyce before the striker could shoot.

The Dark Blues kept their heads and maintained their shape, making it difficult for Hearts to get into dangerous positions. The home side’s play became increasingly ragged. Their moves broke down repeatedly. Lacking composure, and rushing everything, Hearts continually made mistakes in the face of Dundee’s resolute resistance.

Carelessness at the back by Hearts almost allowed first McMullan and then Adam to punish them, but the Jambos managed to scramble clear.

Max Anderson came on for Josh Mulligan midway through the second half, and he gave Hearts new problems with his energetic runs through the midfield. Niall McGinn also came on, replacing Zak Rudden.

The two substitutes were involved in the winner after 78 minutes. Anderson broke into the penalty area onto McGinn’s pass but was denied by Souttar’s tackle before he could shoot. The ball went straight back to McGinn who fired a perfect cross into the danger area in front of Gordon. MULLEN arrived on cue to smash the ball into the roof of the net, sending the noisy travelling support into a frenzy behind the goal.

The Dark Blues handled the remaining 16 minutes of play superbly. Hearts continued to make mistakes in the face of the Dee’s harrying. The subdued and restless home support clearly had little confidence that their team could save the match.

Deep into injury time Ryan Sweeney won the ball in the Dee half and surprised Hearts by racing over the half way line heading for the corner flag. The ploy won the Dee a welcome throw-in, 90 yards from their own goal.

Hearts had one final chance in the final minute of play. Lawlor saved well from Haring’s looping header at the expense of a corner. The Dee defence cleared when it came over, and that was that!

The team went over to celebrate a huge win, and vitally important three points, with the faithful travelling support who provided wonderful backing throughout.

Dundee responded magnificently to falling behind tonight, and worked their way back into the game before half time, giving the fans real hope for the second half. After the break the Dee stepped up a level again and were the better team. Where Hearts were rushed and careless, under Dee pressure, the Dark Blues were calm and composed.

This was a fine team performance, and a well deserved win. So often recently Dundee have lost out narrowly after playing well in parts of games. Tonight the Dee were solid throughout, and increasingly impressive the longer the game went on.

There is still a long way to go, but this win lifts the Dee off the bottom of the table and gives us all some real hope.