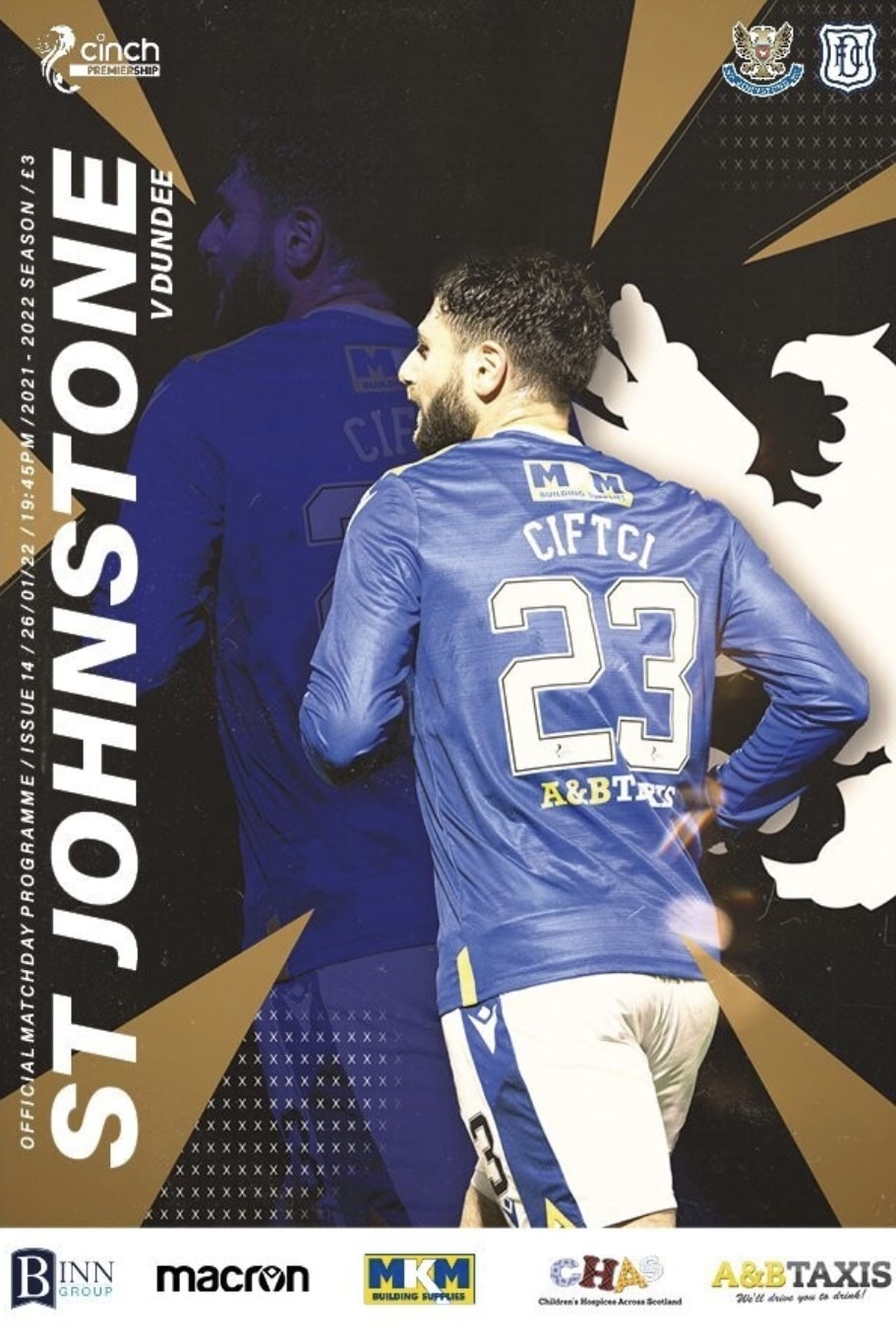 Dundee took a point from a 0-0 draw against St Johnstone in Perth tonight. The two defences were on top in a tense game of few chances. The result leaves both clubs as they were, with the Dark Blues two points ahead of Saints.

There were four changes to the Dark Blues’ starting eleven from the Scottish Cup win over Dumbarton. Adam Legzdins returned in goal, with Ian Lawlor on the bench. Liam Fontaine, Paul McMullan and Leigh Griffiths started in the places of Jordan McGhee and Danny Mullen, who were missing, and Josh Mulligan who was a substitute.

The first half provided ample evidence that this was a crucial relegation battle between two teams short of form. Neither goalkeeper was given anything troublesome to deal with.

St Johnstone had two very tame efforts on goal. Jamie McCart sent a weak header from a corner straight to Adam Legzdins. The Dee keeper had even less bother from Saints’ other shot, a mishit 20 yarder from Murray Davidson that looped gently into his gloves.

The Dark Blues’ only real shot was a fierce effort by Max Anderson from 18 yards, but it was straight at Zander Clark, who saved easily.

The main talking point of the first half was Saints losing their new striker Nadir Ciftci after only nine minutes. He went down injured after an innocuous tackle by Cammy Kerr and was replaced by Chris Kane.

St Johnstone won several corners in the first half, but these resulted from tackles made by Dee defenders a long way from goal. Saints struggled to reach Dundee’s penalty area in open play, a problem that also plagued the Dee when they launched attacks.

Both teams looked short of confidence and played safe passes rather than ones that might hurt their opponents. Players seemed reluctant to risk losing the ball, but the moves that they did try invariably broke down anyway. The long ball was the easy option, and it was adopted all too often.

Dundee made two changes shortly after half time, bringing on Charlie Adam and Niall McGinn for Paul McGowan and Luke McCowan.

St Johnstone, however, looked marginally the more dangerous side in the early stages of the second half. After 55 minutes Callum Hendry had Saints’ best, and only real chance, when he ran down the left onto a long ball. His angled shot was heading inside the far post, but Legzdins saved with his feet.

Adam and McGinn started to exercise their influence as Dundee grew into the game. For the last half hour the Dark Blues were the stronger team, but there was still a dearth of chances.

Leigh Griffiths brought a good save out of Clark with a powerful shot from 18 yards after McGinn had found space on the left.

Most of Dundee’s attacking was coming down the left with McGinn heavily involved in the action.

Alex Jakubiak replaced Griffiths for the last 12 minutes and he was denied a tap in by McCart’s alert defending. Adam weaved his way along the byline and his low cross beat Clark but was cleared by McCart almost on the goalline with Jakubiak waiting behind him to score.

That was a fleeting moment of incisive attacking in a game that proved remarkably quiet for the two goalkeepers.

There was no further excitement. Dundee did most of the attacking in the final minutes but Saints held onto to their point with little difficulty.

A clean sheet is certainly very welcome for Dundee, but there was still a disappointing lack of creativity and goal threat. Nevertheless, there were signs of promise from Niall McGinn’s involvement and his experience should prove valuable in the games ahead.

This was a highly forgettable game, but
the draw ends a bleak run of defeats for both clubs. Neither side will be truly happy with a point, but everyone will be relieved that they avoided defeat.

Dundee were certainly much better than they were in the previous game in Perth this season. That was a particularly poor performance. Tonight the Dee had a slight, if unconvincing, edge over Saints over the full 90 minutes. This point may prove to be an important one for the Dark Blues, but they will have to build on it and start winning again.