Dundee achieved the greatest triumph in the history of the club by merit. Perhaps a Cup final has never produced a better game. The repeated draws seems to have done Dundee good.

"Familiarity breeds contempt" is a well-known adage, and the men who wore the colours of the Dens Park players showed none of the nervousness which had hitherto characterised the play of some of the men.

It was a bit unfortunate that both clubs had to show changes in the third lap, but the two elevens took to the field with determination to once and for all settle the destination of the blue riband of Scottish football fro the season.

It was a sensational start. Dundee dashed off with a vim which before now has brought history in its train, but Clyde were undismayed, and they gave tit-for-tat in no uncertain manner.

The Bridgeton Club had the aid of stiflish breeze, and in spanking style they bore dawn on the opposing defence. Neal was not so successful in the opening stages as he was on Saturday, a hard drive by the right back let the Reds get into close quarters.

They were not easily shaken, and that great opportunist, Chalmers accepted a swinging pass from Booth, and without a moment's hesitation he drove straight home, Bob Crumley only getting the tip of his fingers on the ball as it crossed the line.

A goal in the first three minutes was the sensational start. It has often been said that Dundee are a beaten team if once the other side scores first. But this was not so yesterday. In fact, the defeat never upset their equilibrium, and, if anything, it spurred them on to even greater effort.

Hunter and his supporters gave a glimpse of that pretty football which it is admitted by all they can play. The Clyde wing, halves, and Basics were sorely tested, but somehow thee inability to snatch goals still prevailed.

The Dark Blues were full value for the point which they gained fifteen minutes from the commencement. It was Bellamy that did the trick, although it was entirely due to Hunter's persistence that Dundee secured the corner which led to the outside right getting the opportunity to head past McTurk.

Dundee were now let loose,but the great McAteer was a host in himself, and often single-handed he routed the dashing forwards.

In the first period the Dundee men had the greater portion of the play, but goals would not come their way, and indeed McTurk was not over strained with the shots which came his way. Dundee could not but be satisfied with being on an equality with their opponents at the interval, for it has to be remembered that they had been operating against a fairly stiff breeze.

When Dundee trooped out before 25,000 to resume it could be seen that they were out to go or die. Every man of them had his sleeves rolled up to his elbows, and they buckled to with a determination which gave their supporters every confidence. But it was some time ere they gauge the strength of the breeze in their favour. Their passes ahead were apt to go astray, but Hunter managed to get hold of pass from Bellamy all right. He almost gave it away by kicking too is ahead, and, indeed, it looked as if McAteer were to beat him.

The centro half failed, or, rather, Hunters persistency was too much for him. The Sailor emerged successfully from the tussle. He was a couple of yards wide of the uprights, and with none of his comrades up to take a pass, he did the best thing possible by dribbling right up to the goal, and with neat side "booter" beat McTurk.

What a scene followed the scoring of this - the winning goal. Dundee supporters rose in body, and hats, caps, handkerchiefs and sticks were waived; while the shout of triumph could be beard in the surrounding district.

But Clyde were not downhearted by this reverse, and they went into their work with renewed energy. Dundee were handicapped through an injury to Macfarlane, who was marking for the pavilion when Hunter scored his goal, while the friendly breeze in the closing quarter of an hour also disappeared.

Clyde were rampant, but Dainty stood up to their attacks in great style and time and again when everything seemed lost, Herbert came to the rescue.

Dundee got a shock when Wise, who went centre vice Chalmers, let bang from close quarters. Crumley's legs however, were in the way, and the ball bounded out away from danger.

What a sight of relief reverberated to the pressbox. Clyde died game. 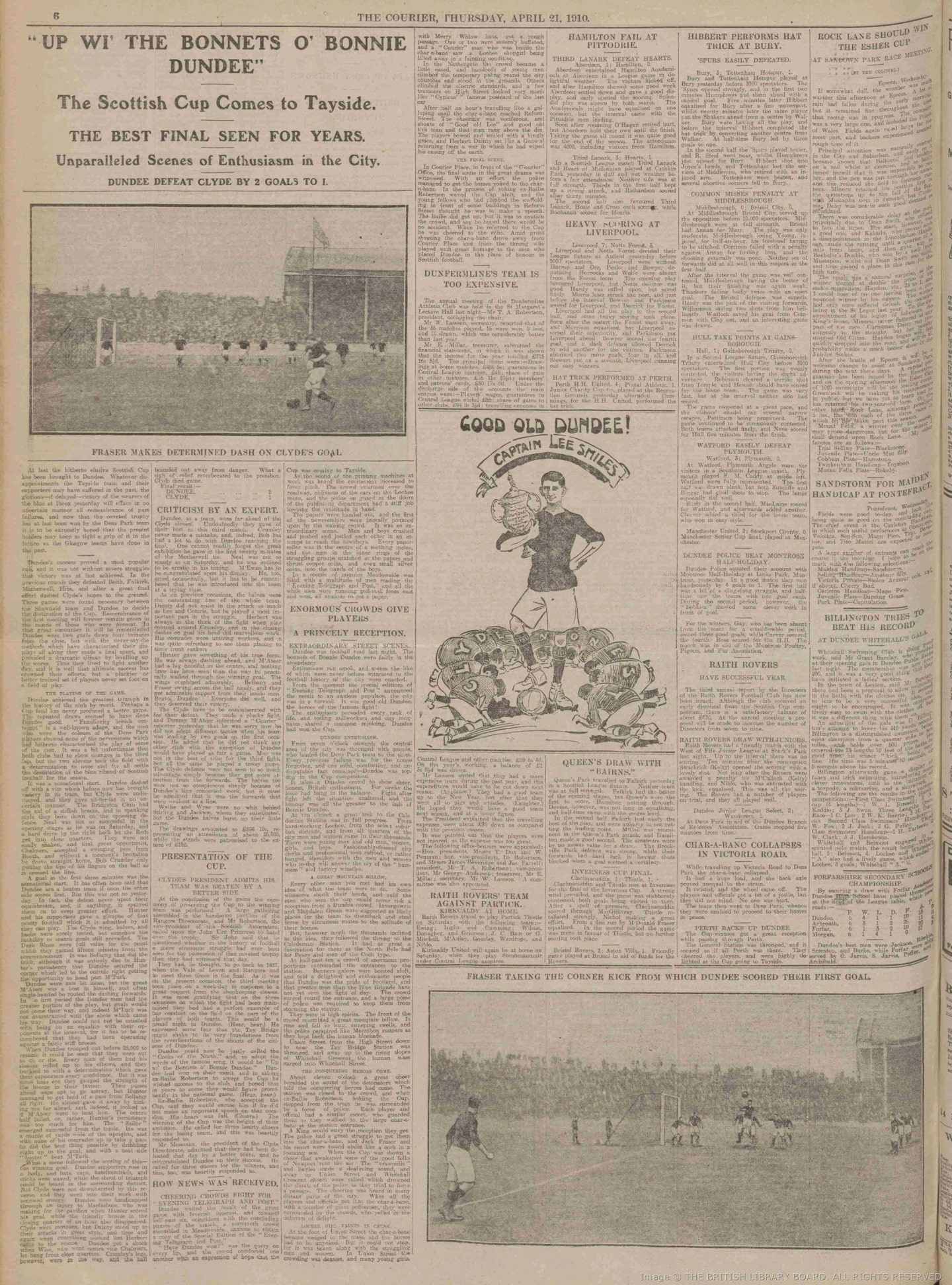