Although played away from home, the fixture which had most interest for Dundee football enthusiasts on Saturday was that between Dundee and the Celtic, of Glasgow.

The meeting was the second between the combinations for Scottish League honours, and, having regard to the result of the previous fight, and the more extensive experience of the west country club, it was generally admitted that Dundee would require to accept defeat.

Celtic kick off against a stiff breeze, and, after a preliminary canter, Dundee invaded, but the ball was knocked over the bar. The leather travelled from end to end, and both goalkeepers had to save. Play was of a finished order, both teams going in for short, smart passing. Two corners fell to Dundee, but none of these were improved upon, and after ten minutes play the Celtic right wing broke away and Madden scored with a long slanting shot.

The Celtic meant business, and McKie's charge was for a time imminent danger.

Retaliating in a creditable manner, Dundee forced their way east, and Keillor tried a long shot. It was successful, however, Cullen picking up the ball and returning it. Subsequently he had to save in rapid succession, and a visit to Dundee's end was success fully repulsed.

The game proceeded quietly, some magnificent lay being undertaken by the forwards. It was quite apparent, however, that the Celtic were the better combination. The defending lines of Dundee successfully coped with them for a time, and McKie on one occasion turned aside a difficult shot.

The next invasion had, however, a different result /McKie stopped a ball which then dropped beside him on the goal line. In reaching to it he fell, and having been charged into the net a Celtic man rushed in and popped the ball through. With commendable pluck Dundee responded, but they played wildly when near the uprights. They were turned to the right about, and the Celtic men keeping the ball low made their way west.

Here McKie had a hot time of it, quite a plethora of shots beig directed at him. He was fully equal to his work, and the spectators cheered.

Luck was against Dundee, the ball from time to time being sent flying outside of the Celtic posts. A minute before half-time Mckie was caught napping, Campbell beating him with a long, low shot, which might have been negotiated. The teams thus crossed over with the Celtic leading by three goals to nil.

When the second half began the wind had fallen away considerably. Although almost hopelessly behind Dundee resume with characteristic determination. They were resisted at every point, however, and McKie had to exert himself. Several times the Irishmen got into the Dundee territory. The forwards knew each other well, but the Dundee's backs faced up admirably.

On one occasion McKie's charge was at the mercy of his opponents, when a Celtic man tonched the ball off-side, and in the next onset the Irishmen sent the ball towards some imaginary goal in space.

Thereafter play fell away, the game being devoid of the finer points displayed in the earlier portion of the proceedings. Matters looked gloomy for Dundee when foul was awarded against them about ten yards from the posts. The kick was badly managed. All the same, the Celtic had undoubtedly the best of matters, but they were unfortunate, and should have scored several times. While the Dundee were showing signs of fatigue, the Irishmen were evidently as fresh as ever, and played a winning match. Dundee tried hard to reduce the lead of their opponents, but their efforts were negative by a want of combination.

Just as the game was closing In was with them, the ball being sent past Cullen by McInroy when no one expected it. Keillor tried to improve matters, but failed,nand the game ended - Celtic, 3; Dundee, 1. 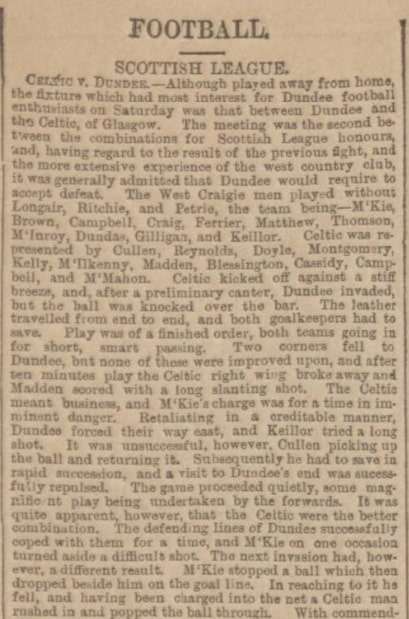