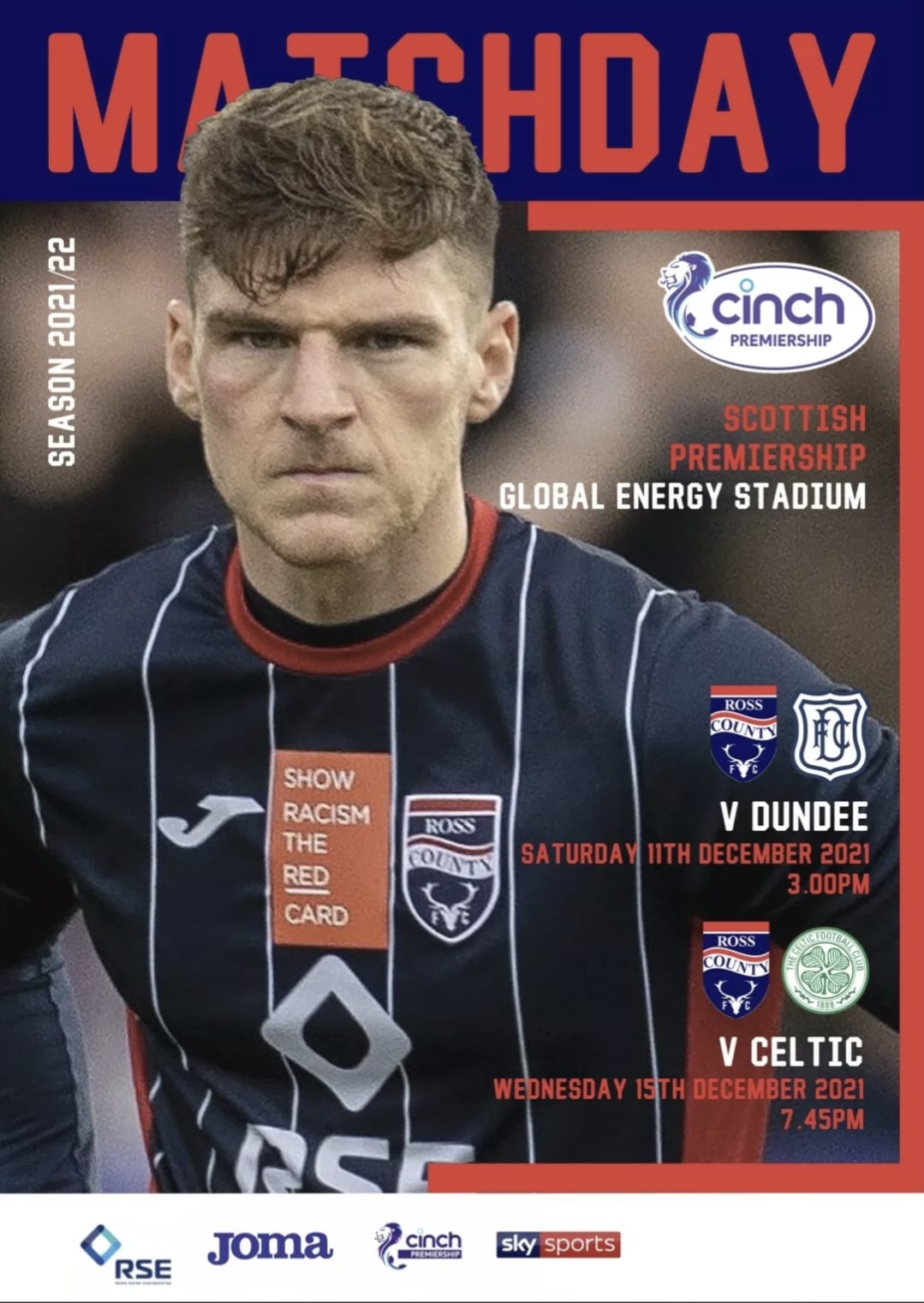 Dundee went down to a 3-2 defeat against Ross County in Dingwall today after leading 2-1 at half time. Luke McCowan scored two fine goals in the first half either side of Dominic Samuel’s equaliser. The Dark Blues looked well set to record a valuable win, but dreadful defensive errors in the second half allowed County to take the lead. An unfortunate own goal by Danny Mullen brought the Staggies onto level terms and Regan Charles-Cook scored the late winner.

The only change to the Dee’s staring eleven was the return from injury of Max Anderson in central midfield, replacing Christie Elliott.

The Dark Blues spent the first few minutes camped in the home half, probing for openings. Paul McMullan and Paul McGowan worked a neat move on the right that sent Cammy Kerr clear. His cross, or shot, flashed across goal with no Dees able to get a touch.

Dundee suffered a blow after 13 minutes when Charlie Adam went down, clearly in trouble. After a quick check he was removed from the action with Jordan McGhee coming on as a substitute.

Two minutes later the Dee took a deserved lead. From 30 yards McMullan swung a free kick beyond the far post. Liam Fontaine didn’t connect properly with his header but it found Luke McCOWAN lurking just inside the 18 yard box and his superb volley flew inside the bottom corner.

Dundee continued to play well and looked the more dangerous side. But it was County who scored next when the Dee were caught out by a quick break. Charles-Cook’s cross found Samuel six yards out. Adam Legzdins pulled off a miraculous stop from the header but the rebound struck SAMUEL and bobbled over the line.

The Dark Blues did not let the setback upset them and continued to look the better team. Fontaine had a free header at the near post from a corner but couldn’t keep it down.

After 38 minutes Dundee went back in front with a beautifully worked goal. Max Anderson took the ball under pressure midway inside the Dee half. He turned skilfully clear of trouble and broke into space giving Danny Mullen the chance to send Jordan Marshall racing clear down the left. Marshall passed inside for McCOWAN to take a touch and shoot across the keeper and score from 12 yards.

The Staggies made a change at half time, pulling off Harry Paton and sending on Jordan White as a second striker. County launched a charge at Dundee in the first few minutes of the half and White almost scored a quick goal. Charles-Cook ran to the byline and crossed low to the near post where White couldn’t get the touch he needed.

Dundee gradually took the sting out of the County surge and started to hold the ball, pinning the home side back. McCowan had a great chance to complete his hat-trick when he picked up a loose pass and ran through the disorganised to defence. Maynard-Brewer pulled off a great save to keep County in the game and the Staggies managed to survive the following scramble.

After a good period when the Dee had kept County quiet and looked the more dangerous the Dark Blues conceded an awful goal. County launched a long ball into the Dee box which Marshall turned out for a corner. Legzdins missed the corner with the ball dropping into the goalmouth, hitting the unlucky Mullen and ending up in the net.

Dundee came desperately close to retaking the lead when a long throw was returned to Cammy Kerr, He hit a low drive towards the near post and Mullen stuck out a boot to turn the ball against the post. It rebounded into play and again County scrambled clear.

It was then County’s turn to go close. Charles-Cook crossed into the six yard box, Harry Clarke volleyed, and Legzdins somehow pushed the ball onto the post with Ryan Sweeney clearing off the line.

The Staggies winner came after 79 minutes. A long high ball into the Dee penalty area should have been no problem, but Marshall sent it up high into the air dropping into the goalmouth. County threw players at the ball. White may have been fouled as he went for it, but the referee was spared the need to make that call by CHARLES-COOK taking advantage of the chaos to score.

Leigh Griffiths had come on for Paul McGowan after County’s equaliser and he had the Dee’s best, and only real late chance. McCowan made a good run and cross, but Griffiths’ header was too close to the keeper.

County managed to hang on under fierce Dundee pressure at the end to celebrate an important win. The Dark Blues have only themselves to blame for dropping three points today. They were the better side for long periods, but were undone by defensive mistakes. In particular, the Dee struggled with straightforward crosses into the penalty area.

On the plus side the wide players, Paul McMullan and Luke McCowan were inventive and dangerous, and McCowan’s goals were both delightful. Max Anderson was the best midfielder on the park, showing skill and composure on the ball as he stepped up to take responsibility after the unfortunate loss of Charlie Adam.

However, the lasting memory of this game will be the poor defending. This should have been Dundee’s day but you can’t hope to take anything from games in which you concede goals as poor and preventable as County’s two in the second half.