Played on West Craigie Park, Dundee. Damp weather rendered the ground soft and slippery, and interfered with the attendance of spectators, which was somewhat smaller than usual. The Hearts travelled minus four of their ordinary League team, and the composition of the Dundee was also considerably changed. The alterations left the elevens as follows:

Play was commenced in a drizzling rain, which, however, cleared off as the game advanced. Dundee started the attack, and within ten minutes George headed through a lovely shot from Petrie, and the ground men stood one up.

Soon the Hearts male tracks to retaliate, and from a free kick near midfield a scrimmage ended in, equality. Dundee responded, but Cox was hard to beat, and this, coupled with the chronic failing of the homsters at the goal mouth, negatived repeated attempts to score.

Returning to the aggressive, the Hearts' right wing bore down in fine style on Dundee territory, and a fast shot from Taylor found an opening and placed the strangers on the lead.

On the re situation of play Dundee again carried off the leather and made a prolonged siege. Several opportunities were missed, but ultimately another shot from Petrie was successfully negotiated, and for the second time the teams stood on an equal footing.

Still Dundee continued to have most of the play, but they could not repeat their performance. Shortly afterwards the Hearts broke away, and practically took the game in hand.

From a corner neatly placed by Taylor, Rae had an opportunity, and sent in No. 3 for the Edinburgh men, and a little later Michael crashed through a fourth. Now that they were placed on their mettle, the weakness of the Dundee defence was painfully manifest. They repelled a few attacks in a kind of way, but were totally unable to overcome the opposing forwards with anything like style

Up until the close of the match the Hearts were in the ascendant, and Taylor, who, along with the elder Hogg at half-back, played a splendid game throughout, piled on a fifth point all by himself. The Dundee forwards (among whom Petrie was a notable exception) had not taken full advantage of their opportunities when they had them, and at this stage, when their chances were fewer, they could hardly get a look in, and could not reduce leeway. 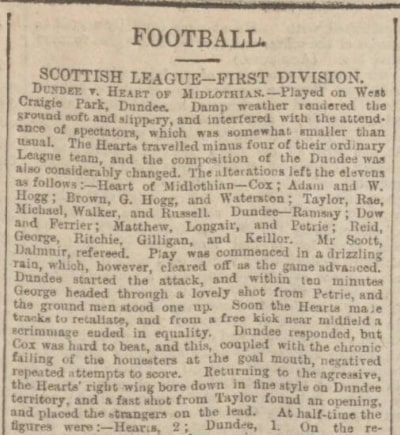