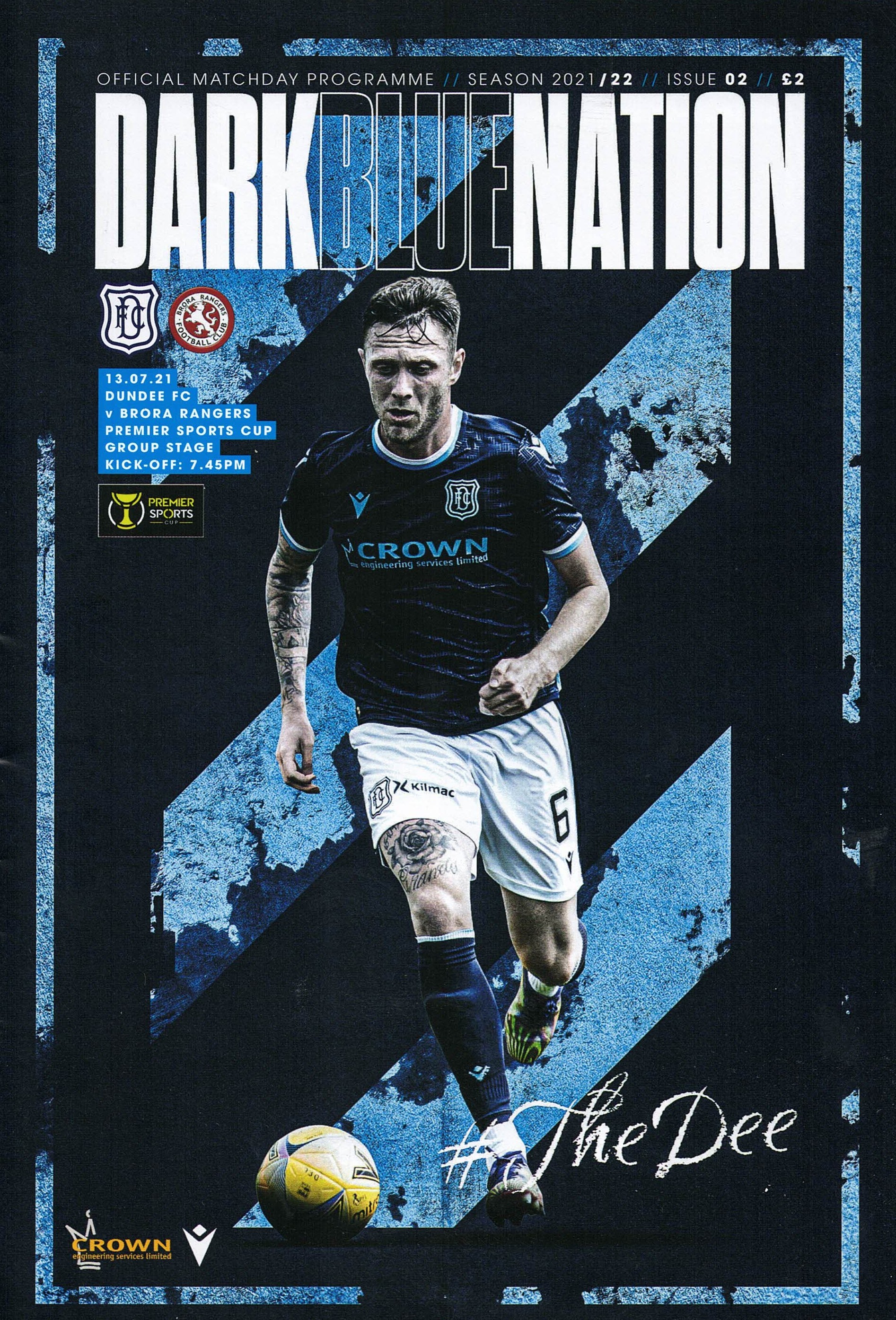 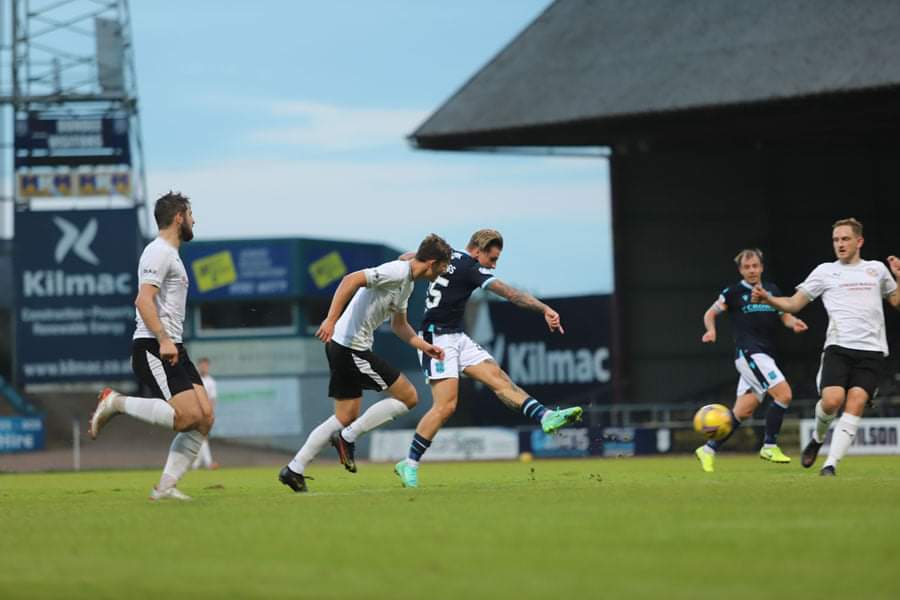 Dundee made a fine start to their Premier Sports Cup campaign with an emphatic 4-0 win at the Kilmac Stadium over Highland League champions Brora Rangers. Paul McGowan and Paul McMullan put the Dee 2-0 up at half time. Two early goals in the second half from McMullan and Alex Jakubiak completed the scoring. The Dee were dominant throughout and were good value for their big win.

Ten of the players who started the Dark Blues’ last competitive game, when they won promotion at Kilmarnock in May, were in tonight’s starting line up. The injured Danny Mullen was the only one to miss out and Alex Jakubiak took his place.

Brora had the first dangerous attack in the second minute when they played their way neatly through the middle only for Andrew MacRae to take a fresh air shot with a half chance on the edge of the Dee penalty area.

That slight scare was the exception in a first half in which Dundee tore repeatedly at the Brora rearguard, setting up a succession of chances. Within a minute Paul McMullan raced past left back Colin Williamson and flashed a low ball across goal with nobody arriving in time. The Dee kept sending the ball out wide to McMullan who was tormenting the visitors’ defence at every opportunity.

McMullan forced a good save from Grant Beattie with a fierce, low shot from 25 yards. The Dee winger then missed by inches after Jordan McGhee won the ball in midfield and sent him racing clear. McGhee volleyed over the bar after controlling a McMullan cross with his chest as Dundee turned the screw on Brora.

It was something of a surprise that the Dee’s dominance and constant attacking didn’t produce a goal until the 24th minute. McMullan again raced away down the right past Williamson. His low cross was left by Charlie Adam, setting up Paul McGOWAN to smash home the opening goal from six yards.

McMullan almost added a quick second, cushioning a volley from Jordan Marshall’s cross and Beattie did well to save at full stretch. McGowan spun on a pass from McGhee but didn’t connect cleanly with his shot and Beattie saved easily. Beattie saved again, more impressively, to keep out Lee Ashcroft’s effort from a corner.

Finally the second goal arrived after 34 minutes, at the end of a patient passing move around Brora’s penalty area. Charlie Adam evaded a rash challenge and from the byline the Dee captain picked out Paul McMULLAN who had a close range tap in to claim his first goal for the Dee.

Dundee continued to pound away at Brora’s overworked defence for the remainder of the half. Alex Jakubiak showed neat footwork to make space for a shot, but couldn’t find enough power to get past Beattie. A corner was cleared as far as Shaun Byrne on the edge of the penalty area and his shot beat the keeper but was cleared off the line by Mark Nicolson.

Brora did break away late in the half to create a good chance. They had a man over and Gregor MacDonald’s pass gave Andrew MacRae time and space to shoot from 18 yards but Adam Legzdins saved well.

Rangers would have been happy to reach half time only two goals behind, but any hopes they had of turning the game round in the second half were quickly crushed.

Four minutes after the restart Jordan Marshall’s cross found Paul McMULLAN. He took the ball down and cracked home the third goal from 16 yards.

Two minutes later Cammy Kerr sent Paul McMullan racing away down the right. He beat his man and fired over a low cross for Alex JAKUBIAK at the far post to stroke home his first goal for Dundee.

Paul McMullan was unstoppable as Dundee continued to pile on the pressure with Brora hanging on by their fingertips as they tried to stop the scoreline getting even worse.

Shortly after the fourth goal Charlie Adam was replaced by Luke McCowan, and then Jason Cummings came on for Alex Jakubiak.

Lee Ashcroft powered a header wide from a corner. A McCowan shot struck Cummings and flew the wrong side of the post as the Dark Blues swarmed all over Brora.

Midway through the second half Dundee made three final substitutions, with Fin Robertson, Max Anderson and Declan McDaid replacing Shaun Byrne, Jordan McGhee and Paul McMullan. No sooner had the changes been made than Jordan Marshall picked up an injury that forced him out of the game. The Dee had to play the last quarter of the match with 10 men., It barely affected their dominance but Declan McDaid had to put in a hard shift on the left covering the left back position as well as raiding down the wing.

Brora did manage a couple of good attacks in the hope of a consolation goal. Jordan MacRae’s powerful 20 yard shot was well saved by Legzfdins. From the same distance Tom Kelly curled a shot across Legzdins and wide.

Despite having only 10 men Dundee continued to dominate the game and kept Brora under fierce pressure. Luke McCowan was unlucky when his shot was kept out by a combination of the keeper and a defender’s head. In the last minute Jason Cummings came agonisingly close to adding a fifth goal when he ran across the edge of the penalty area and smashed a rising shot against the underside of the bar.

Brora gave the Dark Blues a tough opening to last season up at Dudgeon Park in October. Dundee were happy to emerge with a 2-0 win that day. Tonight, however, the Dark Blues were far too good for Brora, who could barely lay a glove on their hosts. Dundee demonstrated their superiority all over the pitch and the margin of victory might well have been even greater if it had not been for some resolute defending by Brora, desperate to keep the score down.

The Dundee supporters who were able to secure tickets for the game were richly entertained by Dundee’s attacking performance. Paul McMullan delighted the fans with a thrilling display of old fashioned wing magic, scoring twice and providing assists for the other two goals. But this was far from a one man show. It was an excellent team performance, and a very pleasing way to start a new season.