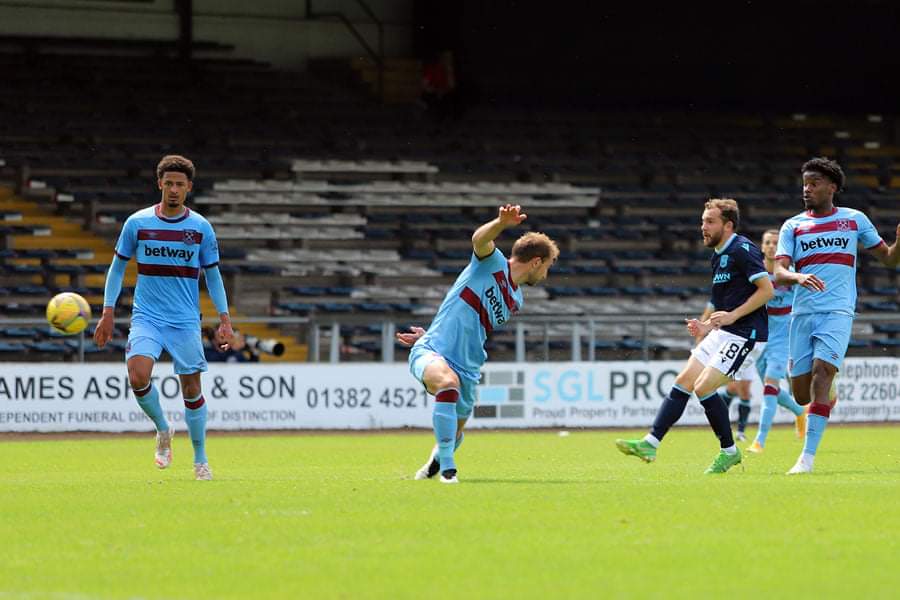 Dundee completed an undefeated pre-season campaign with a 2-2 draw at the Kilmac Stadium against West Ham United of the English Premier League. The Dark Blues put in a hard shift to cope with their English guests but it was the Hammers who had to fight back from a two goal deficit to earn a draw. Charlie Adam gave the Dee an early lead and substitute Paul McMullan had been on the pitch for only a few seonds when he made it two shortly after half time. West Ham fought back with a quickfire pair of goals from Jamal Baptiste and Jarrod Bowen, from the penalty spot, midway through the second half.

The Dark Blues got off to a far livelier start than the sluggish West Ham, who showed every sign of playing only their first pre-season friendly. Sadly Dundee’s bright start was disrupted by the loss of Danny Mullen after only seven minutes. He landed heavily from an aerial challenge, and after receiving treatment was replaced by Alex Jakubiak.

Dundee should have taken the lead when Luke McCowan raced to the byline. His cutback took a couple of deflections en route to Charlie Adam, 12 yards from goal. The Dee skipper will have been disappointed that he fired over the bar, but he made full amends only a minute later.

Declan McDaid whipped an inviting, fiercely driven corner into the near post and Charlie ADAM scored with a neat glancing header after 14 minutes.

West Ham may have been lacking sharpness at first, but the quality of their passing and movement into space was soon evident. The Londoners gradually built momentum and when their fast passing started to click the Dark Blues had to be on their toes to preserve their lead.

Nathan Holland opened up the Dee defence with a superb pass through the middle to release Michail Antonio, but Adam Legzdins raced out to block the shot.

Conor Coventry delivered another incisive pass from midfield to send Ryan Fredericks away down the right. Manuel Lanzini’s shot from the cutback took a deflection and Legzdins saved for a corner.

The Hammers’ quick passing and clever running into space kept threatening to produce a goal, but the Dark Blues’ tenacious defence kept them at bay.

Jordan Marshall turned a dangerous cross from Fredericks out for a corner with a diving header as West Ham pushed hard for an equaliser before half time. The Hammers kept up the pressure and Charlie Adam charged down a shot from Jarrod Bowen. In the last minute of the half Bowen worked his way clear, playing a fast one-two with Lanzini but Legzdins saved with the ball ricocheting off Bowen, then the keeper again, before bouncing safely wide for a corner. Angelo Ogbonna headed over from the corner in the last action before the interval.

West Ham made seven changes at half time, but Dundee waited until the 53rd minute before making any more substitutions. Paul McGowan and Paul McMullan came on for Luke McCowan and Declan McDaid. It was McMullan who made an instant impact, scoring immediately.

The substitute took the ball just inside the West Ham half and headed goalwards. He exchanged passes with Jordan McGhee, and with the Hammers too slow to close him down, McMULLAN had time to take aim and score with a precise shot from 19 yards that flew just inside Darren Randolph’s left hand post.

The Dark Blues offered very little threat after that and the question was whether West Ham would be able to pull back the two goal deficit. They made a quick start, with a goal on the hour mark. A corner was missed by everyone at the near post and 17 year old defender Jamal BAPTISTE connected with a perfect volley to send the ball high into the net from six yards.

Six minutes later the Hammers were level. Jarrod Bowen had been a persistent menace throughout the whole game and he finally broke the Dee defence down with a skillful and determined run from midfield that was ended conclusively by Lee Ashcroft’s indiscreet penalty box challenge. The lack of VAR was hardly a problem as the referee, Craig Fordyce, was faced with the easiest of decisions. BOWEN picked himself up to score from the spot.

Happily for the Dundee defence Bowen was quickly replaced and West Ham were never able to recreate the threat that he offered. Dundee made a succession of further changes, including a trialist goalkeeper, with only Cammy Kerr and Shaun Byrne playing the full 90 minutes.

The substitutions disrupted the game and the last 20 minutes passed without many thrills. West Ham continued to pass and move neatly, but couldn’t find their way through Dundee’s defence that remained composed and alert despite the numerous changes in personnel.

The Dark Blues played some tidy football but could manage only one shot in those last 20 minutes, when McMullan drilled a low shot wide from 20 yards.

West Ham were without five players, who have been at the Euros, and a further two on international duty elsewhere. Nevertheless, there were plenty of familiar names amongst their squad, and also a batch of talented youngsters. The Hammers offered a tough challenge to the Dark Blues, who coped very well.

It was hard to create chances against a team from the English Premier League, but the Dee did well with the few chances that came their way. The defence and midfield had to work hard to keep the Hammers out for the first hour and they responded admirably to the challenge.

Now that the pre-season friendlies are finished the next challenge will come from Brora Rangers in the Premier Sports Cup on Tuesday evening. On this evidence the Dee have prepared well.