In dull and cheerless weather these teams met at Cathkin Park, Glasgow, before a turn out of aboit 3000 spectators.

Dundee lost the toss, and at once besieged the home citadel. Several throw ins and a corner fell to their lot, but Bowman, of Montrose, who made his third appearance for the Glasgow team, and Anderson in goal, defied all their efforts.

The home team now wakened up, and a foul at the goal-mouth was looking dangerous for the visitors. Longair cleared, and the Dundee were soon at the other end but the ball was sent behind.

Returning to the attack, Keiller had the better of an encounter with Bowman, and compelled the home custodian to kick out. Thomson then got on the ball and shot, and as a result of a scrimmage the ball was rushed through.

From the kick-off, Dundee, with a fine combined run, were again dangerous, but the ball was sent well down the field, and Johnston lying handy, he eluded the backs, and sent the ball past McKie.

Open play followed, falls being frequent, owing to the slippery nature of the ground. The home team then secured their innigs, and a run to the visitors' territory forced McKie to throw out. The effort was feeble, and, the goalkeeper deserting his charge, M'Innes had no difficulty in putting number two through for Glasgow.

Starting with renewed vigour, the visitors were soon at the home end, where Ritchie scored. Offside was claimed and granted. Half time arrived shortly afterwards with the score standing 3d L.R.V., 2; Dundee, 1.

The 3d Lanark, who kicked off, bore down on the Dundee's goal, but Petrie returned, and the right wing of the visitors was prominent, but Thomson shot over.

The 3d soon made it warm at the the other end and Stevenson beat McKie with a beauty. The home team were now having the best of matters, and a shot from Boyd just grazed the bar. Shaking off their opponents, Dundee essayed a run, and Keillor shot, the goalkeeper just saving in time. Still keeping up the pressure, the vistors secured a corner and Petrie sent a warm shot, which went over.

Cheered on by their supporters, the Dundee were making strenuous efforts to reduce their leeway, but all to no purpose. A foul off Longair was well placed by Bowman, and the ball, along with the defence, was rushed through, and the score stood 4 to 1 in favour of the Third Lanark.

Not to be denied, however, the Dundee secured the kick-off, and Thomson getting well down, shot, and Gilligan placed the sphere in the net, placing his team 2 up.

Some little vigor was now infused into the game, and, as the Dundee were keeping up a strong, pressing game, the excitement ran high amongst the spectators. Shot after shot was sent in, but all to no purpose, the ball going everywhere but into the net.

Shortly before the call of time Dundee was successful. Ritchie scored from a pass by Keillor, and the game ended -Third Lanark, 4; Dundee, 3. 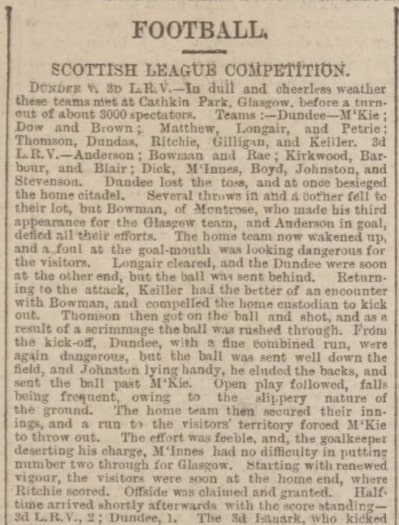