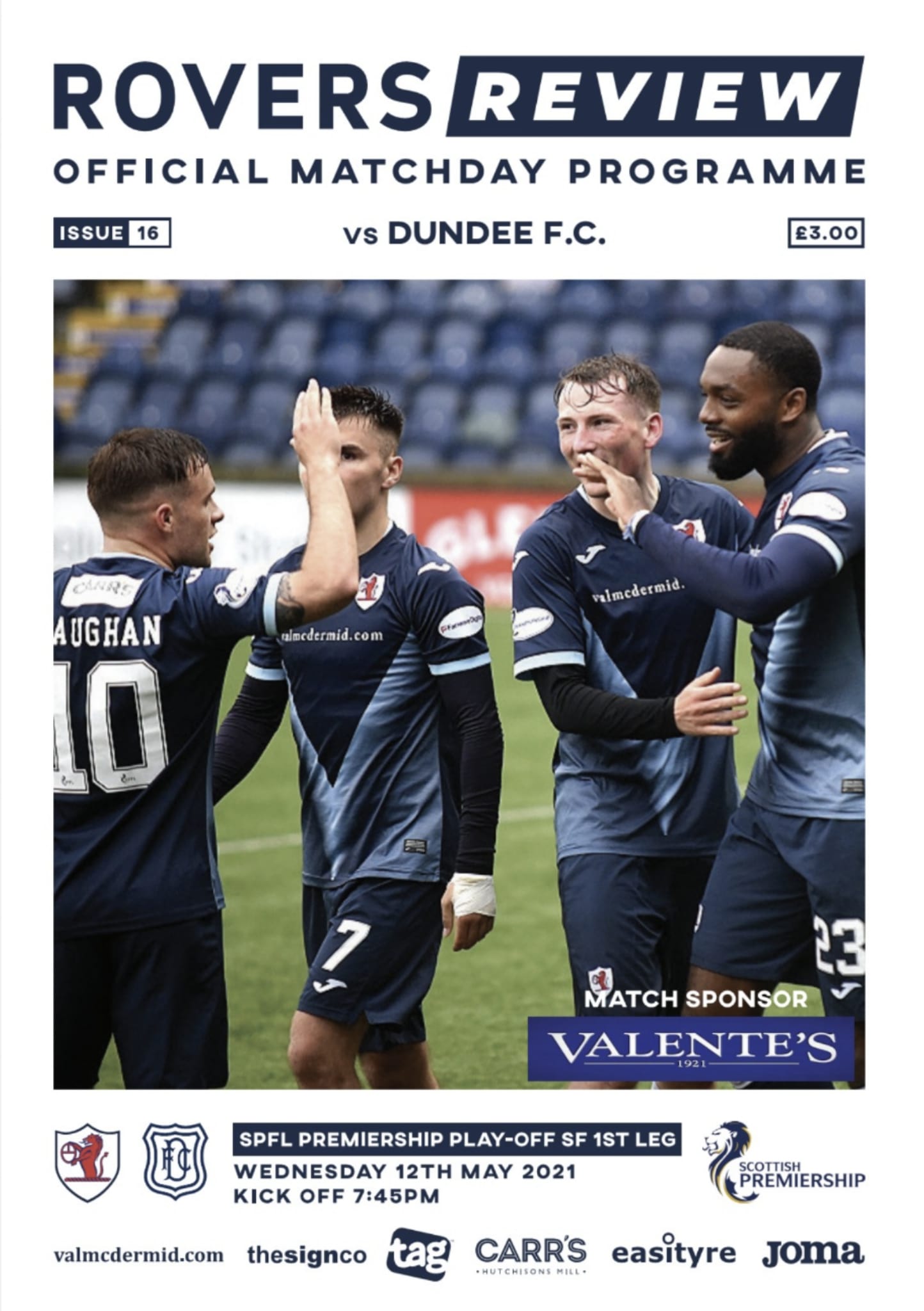 Dundee delivered an excellent performance in Kirkcaldy to take a vital 3-0 lead into the second leg of the Premiership play-off semi-final. Jordan McGhee put the Dee ahead midway through the first half, and added a second 10 minutes after half time. Osman Sow capped a fine evening for the Dark Blues with a late third goal after coming off the bench. The Dark Blues impressed throughout thanks to a disciplined and creative display by the whole team, but the headline act was Charlie Adam, who was involved in all three goals and gave a masterclass in creative passing.

Dundee’s only change from the team that clinched second place by winning at Queen of the South was the return of Liam Fontaine in central defence, with Max Anderson moving onto the bench. Jordan McGhee switched to central midfield in Anderson’s place as James McPake reverted to exactly the same team that beat Rovers a couple of weeks ago.

The Dark Blues had an early half chance when Paul McMullan shot wide after he pounced on a poor pass as Raith tried to play out from the back. The home side had their own early opportunities when good movement and passing took them into good positions to make dangerous cut backs into the penalty area. The first time there was no-one in the right place, and the next two occasions sterling defensive blocking by Charlie Adam and Cammy Kerr kept Rovers at bay.

After that early flurry Dundee settled down and Rovers struggled to penetrate the Dee defence despite ample possession. The Dark Blues were more direct and created more danger with less of the ball.

The opening goal arrived midway through the first half, thanks to a wonderful assist by Charlie Adam. The Dee captain flighted a superb 40 yard pass over the defence for Jordan McGHEE to run in and place a precise volley across Jamie MacDonald and into the net.

Adam had a go at scoring himself following a corner, but his ferocious shot from the edge of the penalty area was charged down. Jason Cummings couldn’t get enough on a header from an Adam cross, almost setting up Liam Fontaine, but the defender was offside.

Another offside flag proved a hugely controversial talking point. Dundee had been keeping Rovers quiet. However, late in the half the home side put together their best move of the match. A neat passing move down the left ended with Reghan Tumilty poking the ball home at the near post. The Raith defender was clearly onside, but the assistant referee’s flag cruelly robbed Rovers of a valid goal.

Dundee made the most of that lucky escape, and dealt with Raith ruthlessly in an excellent second half. The Dee ensured that Rovers were never again able to hurt them.

Charlie Adam’s pass for the first goal might have been superb, but it was only his second best of the night. Ten minutes into the second half he picked the ball up inside the Dee half and saw Jordan McGhee’s lung bursting sprint through the middle. The exquisitely measured pass took the whole Rovers midfield and defence out of the game, allowing McGHEE to run in, take a perfect first touch and stab the second goal home.

Dundee then took firm control against a deflated Rovers team, passing the ball around slickly, looking for further opportunities and taking no risks. Raith’s passing game, while always neat, rarely went anywhere and never hurt the Dee. Twenty minutes from time Rovers finally got into a good position when Gullan cut the ball back from the byline, but substitute Ogwu sclaffed the half chance well wide.

Danny Mullen came on for Jason Cummings and won a free kick a couple of feet outside Raith’s penalty area. Taking the free kick himself he sent the ball just over the crossbar.

Dundee’s smooth performance didn’t skip a beat even when Liam Fontaine limped out of the match. Jordan McGhee moved back to centre defence and Max Anderson came on in midfield. The young midfielder’s energetic style and willingness to make attacking runs beyond the defence made him an ideal replacement for McGhee.

So well did the youngster slot into that role that he replicated McGhee’s running onto defence splitting passes from Adam to set up the third goal, after 84 minutes. Instead of shooting, however, Anderson saw his fellow substitute Osman SOW in a better position and set up his teammate to take a touch and fire home number three from 15 yards.

The last few minutes were spent by Dundee passing the ball around and looking fully capable of adding a further goal. Paul McGowan ended a lovely passing move with a shot from 18 yards that MacDonald saved.

This is only half time in the play-off semi-final, but the Dark Blues have put themselves in a very strong position with an excellent performance. They did have a massive slice of luck when Rovers had a goal incorrectly disallowed, but that was the only occasion that Raith were able to cut Dundee open after their bright opening.

Dundee deserved the win because their game plan worked perfectly. They contained Raith’s passing game and used the ball much more economically and effectively in attack. The Dark Blues’ ability to make penetrating passes and get runners into positions to receive the passes gave them a creative edge that Rovers could not cope with.

Charlie Adam will rightly take the headlines after this performance, but he was so effective because he was part of a very, very good team performance. The challenge for the Dee now will be to maintain this standard on Saturday in the second leg.