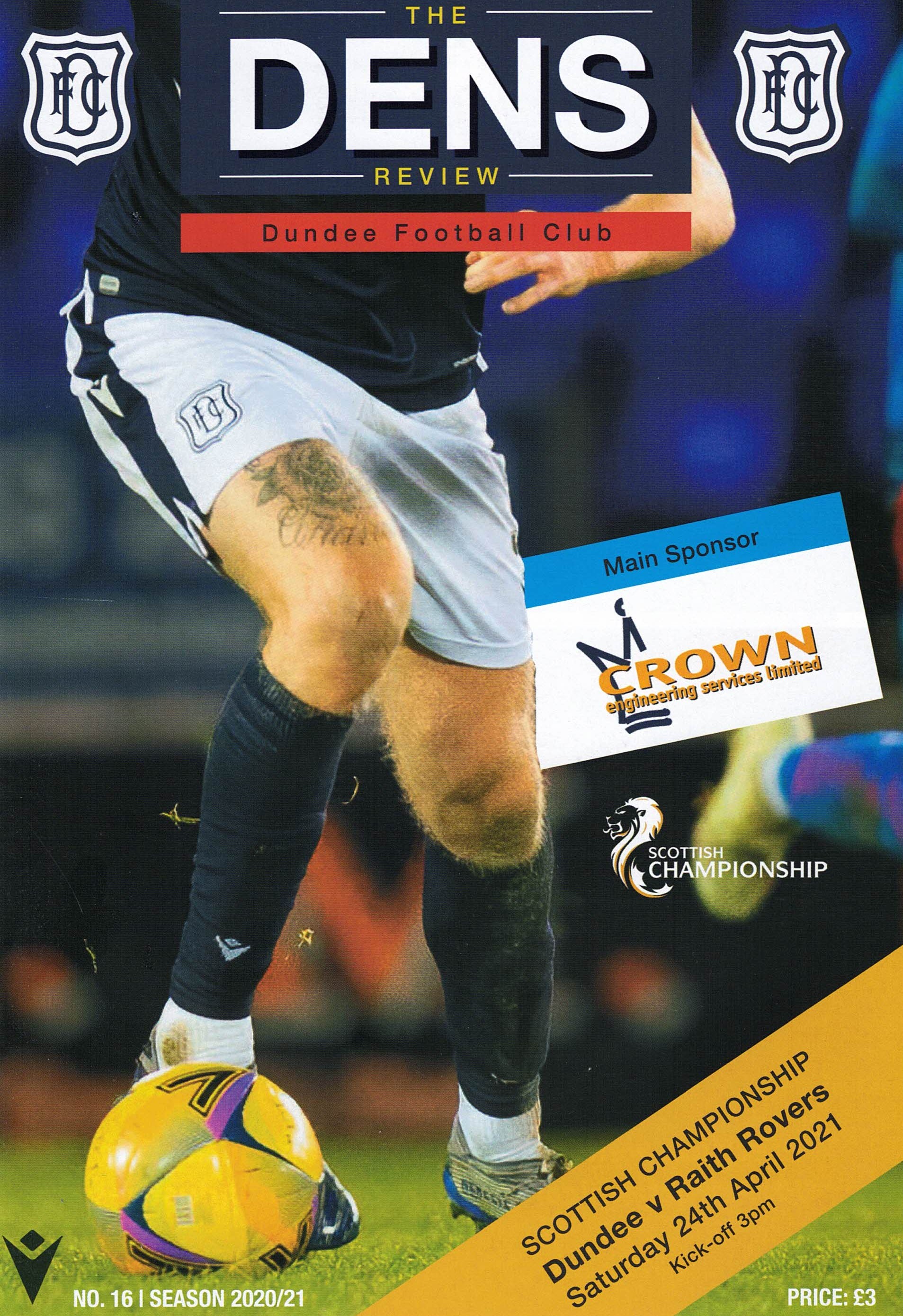 Dundee emerged from a tough battle against Raith Rovers at the Kilmac Stadium with a 2-1 victory that confirms their place in the Premiership play-offs. Jason Cummings, from the penalty spot, and Liam Fontaine scored the crucial first half goals and Raith’s goal from Kyle Benedictus after 88 minutes was too late for Rovers to stage a late fightback.

There were three changes to the Dee’s starting line-up following the draw at Inverness. Charlie Adam and Jason Cummings retained their places after coming on as susbstitutes on Tuesday in the places of Jonathan Afolabi and Danny Mullen, who were on the bench. Paul McGowan returned from injury to replace Declan McDaid, who had a hamstring problem.

The bright sunshine matched the lively opening from both teams. Rovers were eager and confident, but the Dark Blues carried greater early threat. A low cross from Paul McMullan flew through the penalty area with no takers as Dundee started to move the ball around quickly and even inventively.

The opening goal arrived after 13 minutes from the penalty spot following a fast and clever move. Charlie Adam and Paul McGowan combined to send Cammy Kerr racing down the left. His cross found Jason Cummings beyond the far post and his shot struck the arm of Kyle Benedictus. Mr Collum pointed to the spot and CUMMINGS sent Jamie MacDonald the wrong way to score.

The quality of the game was patchy, with too many unforced errors from both sides. Dundee were working hard, pressing well and always threatening to make things happen. If some of the passing was erratic, failing to find a Dee player, at least Dundee were trying ambitious passes that would hurt Rovers.

Around the half hour mark Raith had a flurry of attacks and corners, none of which gave Adam Legzdins any work in the Dee goal. Dundee handled that well and when they had the opportunity to attack again they quickly added a second goal.

Paul McGowan drove in a wonderful corner with accuracy and pace from the left. Liam FONTAINE got his head to it at the near post and the ball was over the line before Hendry could clear.

The Dark Blues had their best spell of the game in the remainder of the first half. A third goal looked on the cards as the midfield harried Rovers, the Dee’s passing clicked and the forwards poured forward into space. McMullan couldn’t quite get his cross right when he had the opportunity to set up an easy chance for Cummings and Rovers reached half time only two goals adrift. Late in the half a fiercely struck 30 yard shot from Dylan Tait whistled narrowly past the post as Raith offered a reminder that they were still a serious threat.

The second half gave us plenty more evidence of that threat as the visitors went on to dominate possession. Rovers had more of the ball and kept probing the Dee defence trying to pass their way through to goal. The Dundee defence held impressively firm, ably assisted by the hard working midfield. The Dark Blues kept trying to catch Raith on the break but never quite managed to get it right. As a result long periods passed with constant action that added up to nothing that was newsworthy.

In the middle of the second half Rovers had their best chance so far, at the end of their slickest move of the game. Raith sliced through the middle with quick passing between Hendry and Ugwu. Hendry had time to shoot from 18 yards before he was closed down, but sent his powerful shot straight at Legzdins, who did well to hold onto the ball.

Dundee lost Liam Fontaine to injury and he was replaced by Max Anderson. The youngster went into central midfield and Jordan McGhee moved to centre back.

Rovers’ substitute Vaughan went close with a diving header at the back post as Rovers continued to push for a goal against a Dee defence that was giving little away.

Danny Mullen and Alex Jakubiak came on for Jason Cummings and Paul McMullan as the Dee tried to see the game out without taking unnecessary risks. The final few minutes brought more excitement than Dundee supporters wanted as the game produced a goal and a red card.

Dundee couldn’t clear a corner cleanly. They were caught out when the ball was quickly played back out to Hendry who had taken the corner. He had time and space to fire in a dangerous cross that took a deflection on its way to the far post. A bundle of bodies flung themselves at the ball and Kyle BENEDICTUS’s head got the crucial touch as players and ball piled messily over the line. It was as messy a goal as you could see, but there’s no disputing that Raith deserved it.

The Dark Blues handled the remaining six minutes, including four minutes of injury time, calmly and sensibly. That was more than could be said for Rovers’ midfielder Dylan Tait when a Raith corner was cleared to Paul McGowan. Rovers were fully committed in attack and Dundee had a fleeting chance to try and spring a couple of player on an 80 yard run for goal, or perhaps to head for one of the distant corner flags. Tait ruled out both options by diving in late, recklessly, and painfully with a late tackle to leave McGowan prostrate and in need of treatment. By the time the Dee midfielder was back on his feet Tait was long gone, dipatched by Mr Collum’s red card.

The win confirms Dundee’s place in the play-offs, but they could still finish second, third or even fourth. They have to try to win next week at Queen of the South, and hope that Raith don’t beat Hearts. A draw will confirm third place for the Dee.

Raith showed that they will be formidable contenders in the play-offs. They will be disappointed that they failed to take the point that would have secured second place, but the Dee did just enough to edge them out. Some of Dundee’s attacking was wayward, but the defence was solid until Rovers’ late goal. The midfield provided an effective barrier in front of the defence and if Dundee had shown only a little more composure and accuracy in the second half the final few minutes might have been more enjoyably relaxing.

Cammy Kerr was deservedly named man of the match after an impressive performance in the unfamiliar left back role. His decision making was excellent when supporting attacks. He refused to check back constantly and predictably onto his favoured right foot, and sent over some worthwhile crosses with his left foot. The first goal followed one of those crosses from Cammy’s left foot.

The Dark Blues did well to claim the three points they needed today and the evidence provided by this game comfirms that it will be a tough fight for whoever reaches the play-off final against a Premiership club. It’s going to be hard, but at least the Dee are in that contest.

Today we know we'll have to be at our best to get the three points we desire.

Today is our final scheduled home.match of the season and while we are confident of more to come in the form of the play offs, I know that schedules and print deadlines could get in the way of how future programmes look so I want to take the opportunity now to thank every support for your backing this season.

It's been a tough year off the pitch trying to navigate through a whole host of new challenges. It would have been a whole lot easier knowing that supporters would be alongside us on a Saturday but the backing we have received remotely has still helped to drive us on.

The lack of supporters has meant the matches haven't been the same and I'm looking forward to the day that the news comes about the return of fans as it is so vital to the players and the club.

We have two massive games coming up now which will hopefully lead onto more massive games as we look to get back to the top flight.

Today we know we'll have to be at our best to get the three points we desire. Raith are a good side but we are in good form and the staff and players are right up for it.

Ideally we would already be confirmed in the play off spots but we will give everything in these final two matches to ensure we are there and we finish as high as we possibly can.

Thank you for your backing throughout the season and I look forward to see everyone back at the Kilmac Stadium as soon as possible.