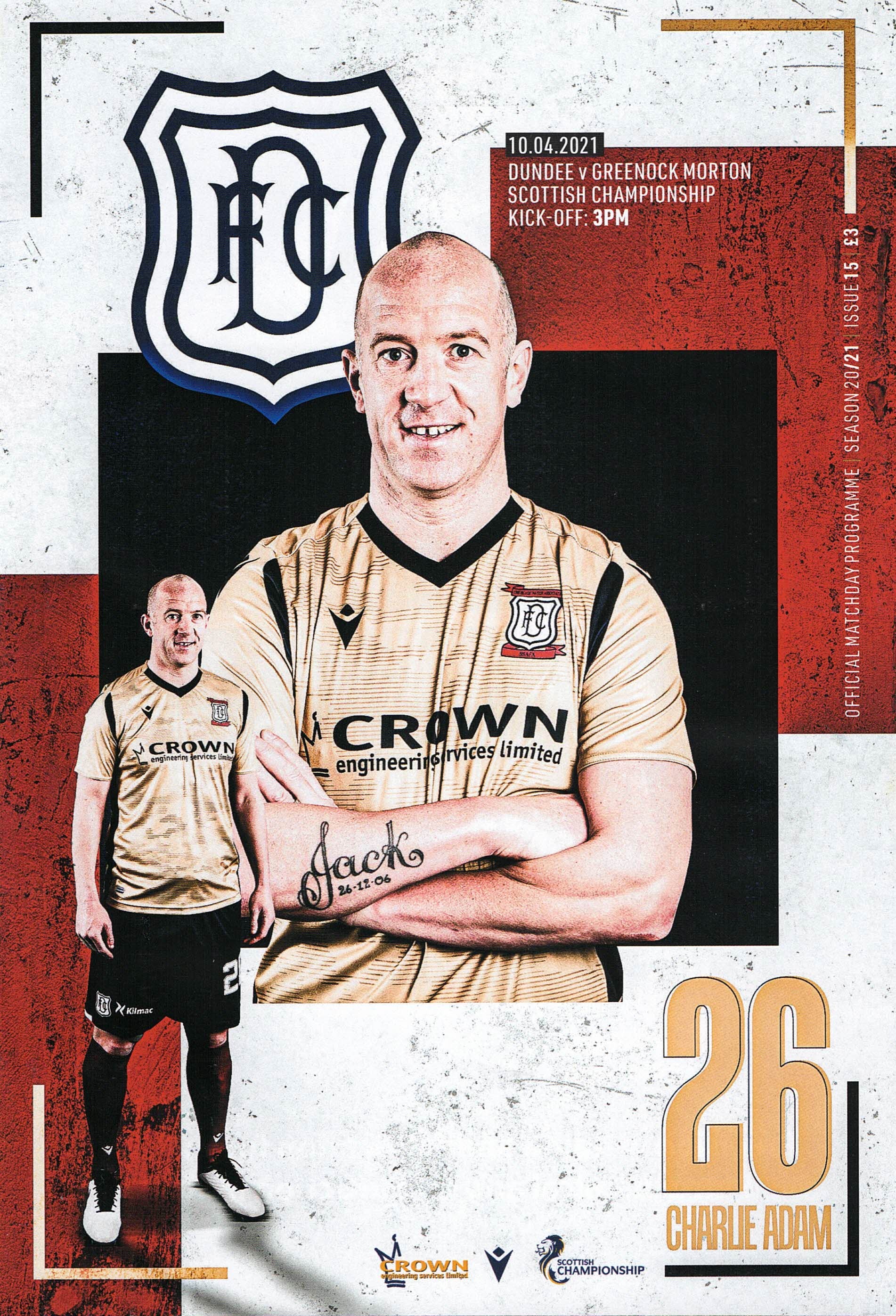 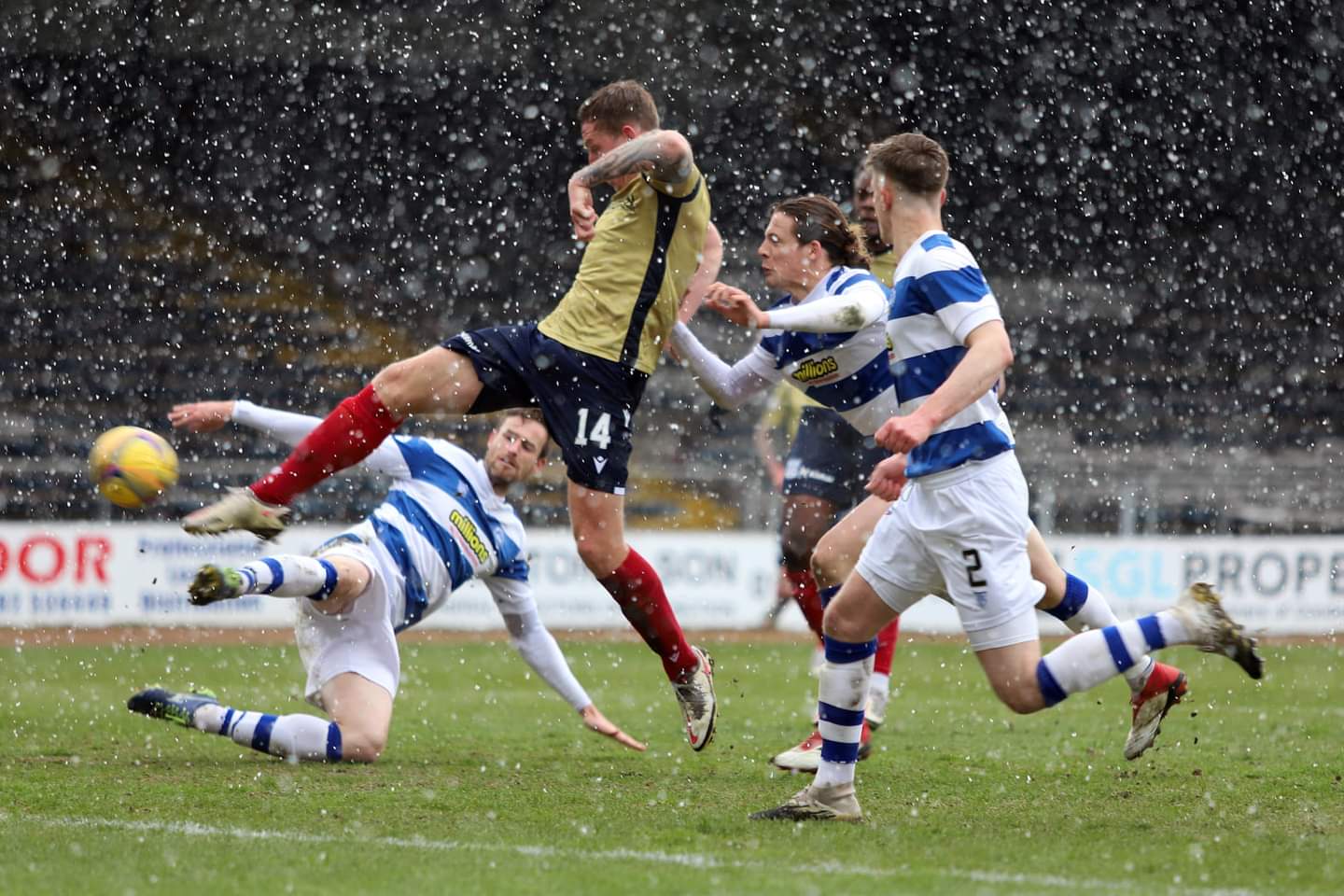 Dundee had to settle for a 1-1 draw at home to Morton this afternoon. Neither goalkeeper was overworked until the last quarter of an hour. Aidan Nesbitt put Morton ahead after 79 minutes only for Lee Ashcroft to rescue a point with a late equaliser. Despite frantic pressure in injury time the Dee couldn’t find a winning goal.

James McPake was able to field an unchanged line-up and it was no surprise that he chose to do so after the win at Ayr. The only change to the substitute’s bench was Osman Sow replacing young Lyall Cameron.

Dundee started busily, buzzing around the Morton half without creating any real chances. Morton sat back allowing Dundee to make all the early running. It took the visitors fully 17 minutes to venture as far as the Dee’s penalty area.

Max Anderson turned cleverly and found Jason Cummings whose shot from 18 yards was blocked. Late in the half Anderson led a promising break out of defence that ended with Declan McDaid’s shot being comfortably held by Aidan McAdams.

Dundee couldn’t turn their dominance in possession into clear chances against Morton’s packed defence. There were a few scrambles in the penalty area following set pieces, but these were more a matter of Morton defending untidily than being forced into panic mode.

If the Dee were misfiring in attack they were at least getting the ball forward and making Morton’s defence put in a strenuous shift. The visitors failed to offer any goal threat in the first half and Adam Legzdins had a very quiet 45 minutes.

Dundee improved slightly after the break, without being impressive. Jason Cummings scooped a shot high and wide after Declan McDaid ran down the left and cut inside. A promising move ended with Paul McMullan’s low cross shot being taken by the keeper.

A minute later McMullan found space on the right again and his cross led to a frantic goalmouth scramble in which both Cummings and Anderson had close range shots blocked. Jason Cummings seemed to pick up an injury in the melee and he was replaced by Jonathan Afolabi.

As in the first half Morton offered next to nothing in attack, but started to come out of their shell in the last 20 minutes. They were more adventurous but didn’t get a shot on target, or even have an effort that went anywhere near the goal, till the 78th minute. And then they scored.

Lewis Strapp’s 20 yard shot was firm, low and heading inside the post. Legzdins did well to save, but Aidan NESBITT followed up to score.

Dundee cranked up the pressure on Morton and at last looked truly dangerous as the snow flurries turned into a thick shower of the white stuff. Adam’s right footed shot from 25 yards brought a good save from McAdams, who touched the ball over the bar. When the corner came in Fjortoft managed to block Lee Ashcroft’s header. Morton couldn’t clear and Dundee kept turning the screw. McAdams had to save well again when Sow met Adam’s cross at the far post with a powerful header.

Lee Ashcroft stayed up in attack and was rewarded when Sow nodded on McGowan’s lofted ball. ASHCROFT wasted no time in scoring, stabbing his shot past the keeper with 88 minutes gone.

There were four minutes injury time, but Dundee couldn’t grab a late winner. They might have done so when Declan McDaid shot high into the net following a free kick. However, the referee, Mr Newlands, ruled that Osman Sow had committed a foul when the free kick came in. It looked more a case of two Morton defenders colliding with each other and Sow as they challenged in the air, with the ball falling kindly for Dundee.

A win would have flattered the Dee, however. They were off the pace for most of today’s game. Morton’s game plan almost worked to perfection, sitting deep, frustrating Dundee, and hoping something might fall their way later on as Dundee chased a goal. The Dark Blues have shown themselves to be adept at opening up defences recently, but today they lacked guile. The passing and movement wasn’t slick enough, and the attacks were usually too slow to open up Morton’s massed defence.

Surprisingly, all the other games in the Championship ended in draws, so the dropped points have no impact on Dundee’s position. However, this was an opportunity missed with three of the last four games being away from home.

It will be good to be back at Dens this afternoon as we look to build on another good result on the road.

We have put a good run together of results but it has to continue, we now have give massive games to go.

We need to secure our playoff place in that run then finish as high as we can. We'll then have games in the play offs to give ourselves the chance.

The performance on Tuesday at Ayr was excellent from start to finish. As we well know, it's a very tough place to go.

We needed to make amends for the last match against them and I think the way we did it was particularly pleasing. Not many teams go there and win as convincing as that, likewise with Alloa a couple of weeks ago, very tough venues to go to and it's that which pleases me the most. Not for me but for my players.

The third goal is as good a goal as I have seen in my time at Dundee.

The aim is to get out of this league. We showed on Saturday last week we can match a Premiership team. People might say St. Johnstone didn't play well but I spoke to Callum Davidson and he said they didn't play so well because we were so good. We want to do that every week, we want to get back into the Premiership.

It's going to take performances like this the next five games then the play offs after that.

Morton will provide another tough test this afternoon. We have taken four points from our games against them this season but we have had to work hard for the points and will again today.