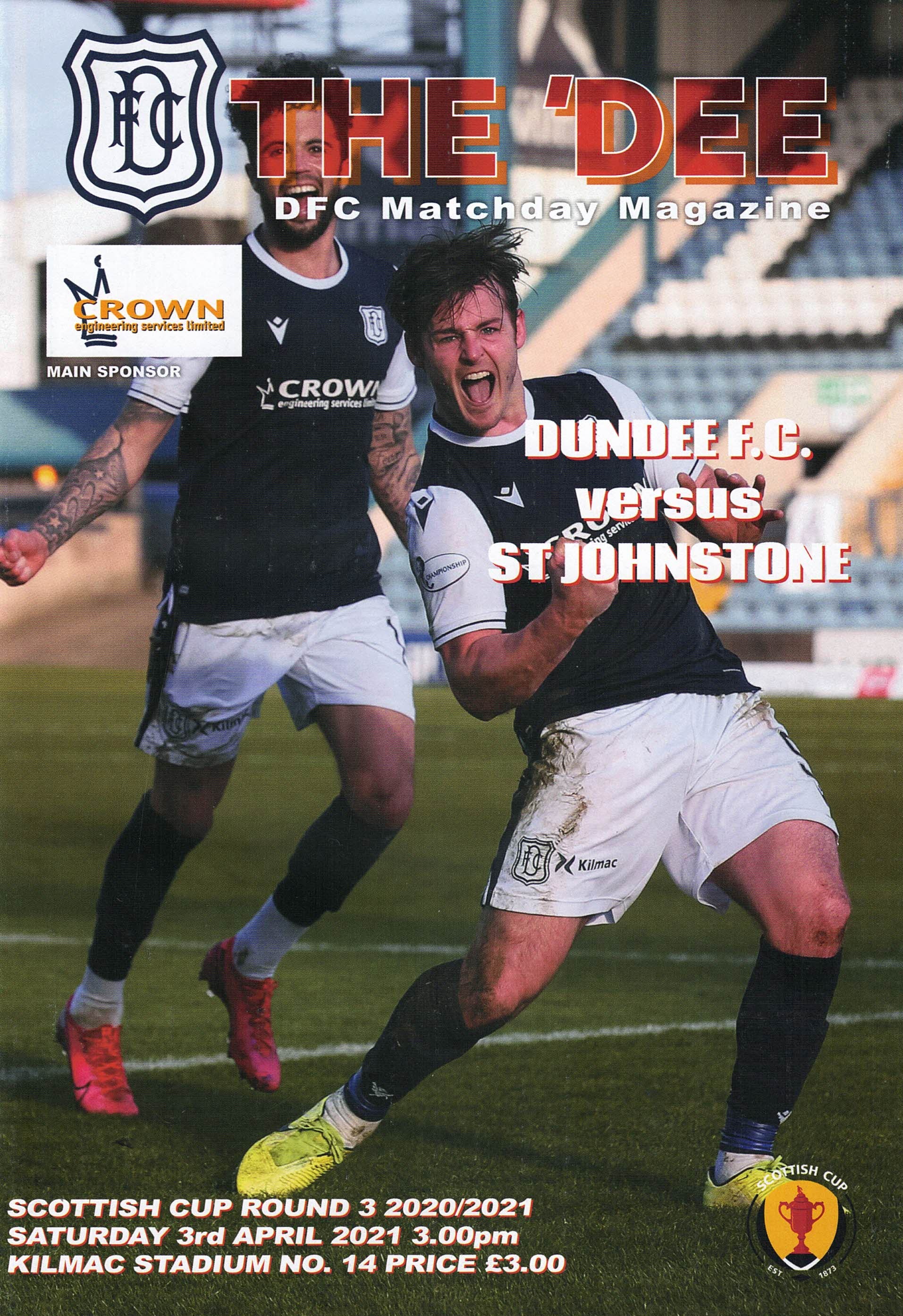 Dundee were knocked out of the Scottish Cup by St Johnstone, going down 1-0 in the third round tie at the Kilmac Stadium this afternoon. Guy Melamed’s first half goal was enough to give Saints victory, though the Premiership side rode their luck in a second half in which the Dee had a goal disallowed and missed a penalty.

The Dark Blues had four changes from the team that beat Dunfermline. Cammy Kerr, Shaun Byrne, Charlie Adam and Danny Mullen returned to the starting eleven. Christie Elliott, Paul McGowan and Jason Cummings were on the bench, and Osman Sow was injured.

Neither defence was troubled in the opening stages, as both teams worked their way into the game slowly. Zander Clark was the first keeper to be called into serious action when he had to punch away a good cross from Jordan Marshal who had linked well on the left with Declan McDaid. It was hardly a chance, but it was the nearest thing we had in the opening quarter of an hour.

After both teams had tried patient build-ups Saints took the lead with a disappointingly simple route one goal. Jason Kerr launched a punt down the field from just outside his own penalty area. Liam Fontaine allowed the ball to glance off the top of his head and Stevie May chased the ball to cut it back into the goalmouth where Guy MELAMED steered his shoot across Legzdins and inside the far post.

Dundee responded well to the setback and Charlie Adam’s shot from 30 yards flew a foot over the crossbar. Paul McMullan had a go from 25 yards and smacked his shot against the bar.

Once in the lead Saints saw less need to push men forward and kept a tightly disciplined defensive line, well protected by the midfield. Notionally three at the back, they more often had the full five with the wing backs resisting any temptation to gallop forward. Dundee did manage to work their way into some promising positions but couldn’t find the right final ball to unsettle Saints’ defence.

St Johnstone did have a penalty claim when Lee Ashroft dispossessed Stevie May rather clumsily, bringing the striker down as they both fell. Saints had a dangerous break when Wotherspoon set up Melamed, but Adam Legzdins was out quickly to grab the ball as the Israeli striker tried to take the ball round him. Melamed had a half chance right at the end of the half, scooping another cutback from May well wide.

Dundee started the second half brightly and came agonisingly close to a quick equaliser. Charlie Adam’s cross was taken high by Zander Clark, who fumbled the ball when he hit the ground. Danny Mullen gratefully scrambled the ball into the net but his celebration was abruptly cut short when he noticed the assistant flagging for the referee’s attention. After a lengthy discussion Mr Napier disallowed the goal. The only plausible explanation is that Mullen must have been marginally offside when Adam crossed.

The game continued with the Dark Blues hogging possession but struggling to break through St Johnstone’s defence. Lee Ashcroft picked up an injury and was replaced by Paul McGowan. Jason Cummings also came off the bench in the place of Max Anderson. Dundee went to three at the back, with only one centre back, flanked by the two full backs. It seemed a bold move, but a cautious Saints team showed little interest in trying to open up and take advantage.

After 73 minutes St Johnstone at last put together a genuine passing move in attack but Callum Booth shot well over the bar. Within a minute the Dee had a penalty. Paul McGowan’s long ball towards Danny Mullen lured Zander Clark from his goal. The keeper took the ball, but only by flattening Mullen on his way.

Charlie Adam took the penalty but Clark made amends for his rashness by pushing the shot onto the post and gathering the rebound.

Dundee pushed forward in the last 10 minutes and put together some promising attacks from quick passing moves. Paul McGowan was freed to play a dangerous low ball into the goalmouth, but it was cleared. Another good move ended with Declan McDaid’s shot being blocked by Rooney.

The final chance, however, fell to Saints. Paul McMullan lost the ball as he tried to run out of defence and substitute Glenn Middleton shot across goal and wide.

That’s the end of Dundee’s Scottish Cup run for this year. The Dark Blues weren’t quite at their best, but neither were St Johnstone. The match was settled by a momentary lapse by the Dee defence, compounded by a failure to take the great opportunity from the penalty spot, and a margin of a couple of inches when the woodwork and linesman’s flag saved a Saints team who did just enough to reach the fourth round.

I was delighted for the players last Saturday.

To go 2-0 down after five minutes and to come back and show the character to go on and win the game was fantastic.

It wasn't good enough for the first five minutes, we know that, but I thought after that we were well on top.

It was a huge win for us, we know we had to win after the results earlier in the day and we got it in the end. It was a massive three points.

We weren't happy with the start in terms of defending. They are good finishes but you have to give yourself a chance in a game. Luckily for us we end up winning, I think down to our quality in the end. We can't afford to start like that but you have to take the positives, real character from the players in a real pressure game. We had fallen out of the play off positions, we knew it was a chance to get back into joint 2nd and credit to the players.

Danny Mullen only trained the day before the match and it was still touch and go in the morning if he was going to make the bench and what an impact he still managed. Not just the goal but his work rate as well but that is what it takes. I think we saw that from every player.

Two more goals from set pieces which was pleasing as we spend a lot of time on them. I also look on it from the other side where we defended so well late on when they were throwing everything at us. Liam Fontaine, Lee Ashcroft and you add Danny Mullen and Adam Legzdins into that as well, it was bodies on the line and it had to be. Set plays are huge in football, you see games won and lost on them all the time.

We have put together some good results recently and it's a break from the league this afternoon for a really tough test.

St. Johnstone have had a great season and it will be good to test ourselves against a top six side from the Premiership.

The Scottish Cup is a competition that I love so I'm looking forward to the match and we'll be looking for the result to progress to the next round.

Enjoy the game, wherever you are watching from.