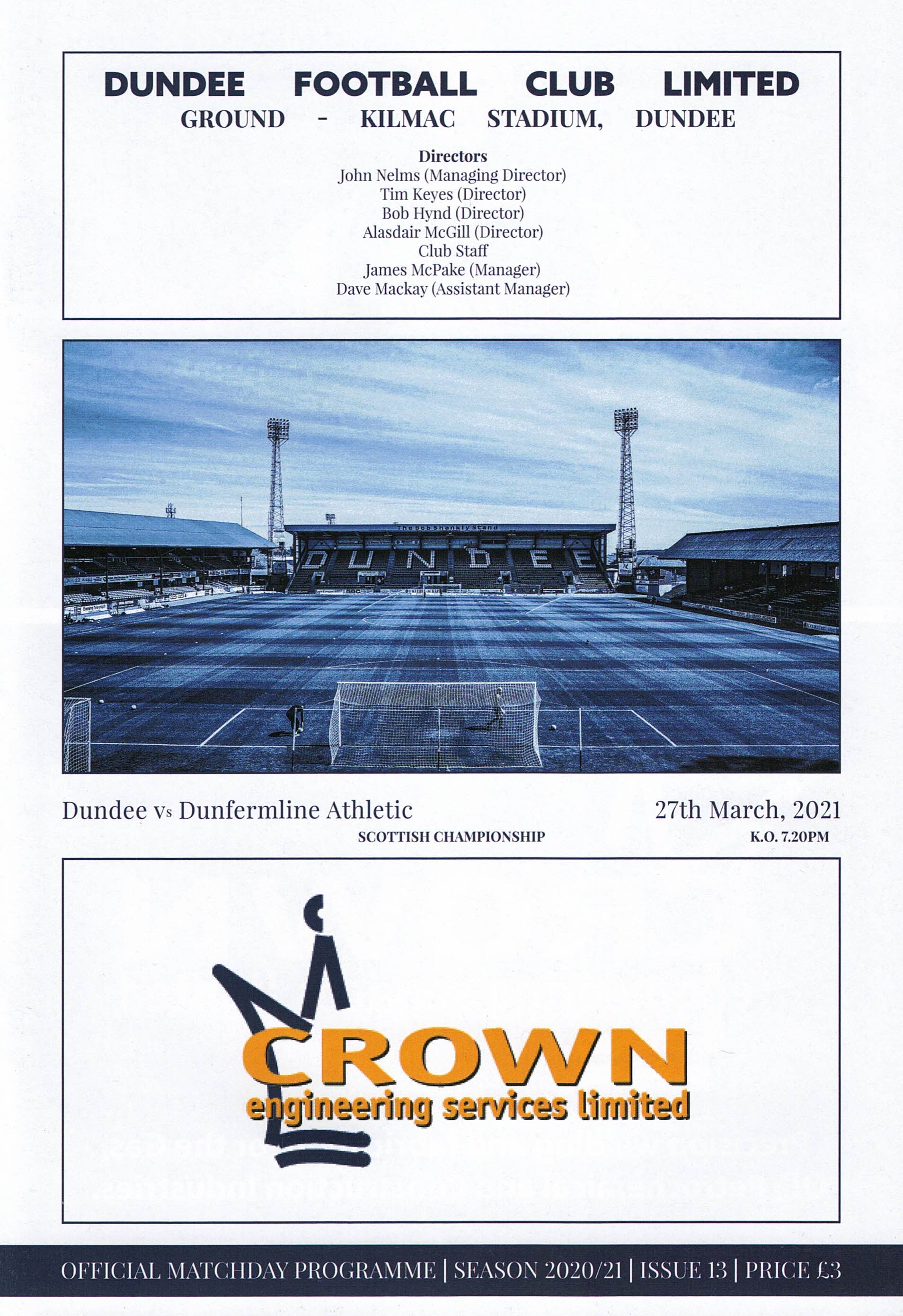 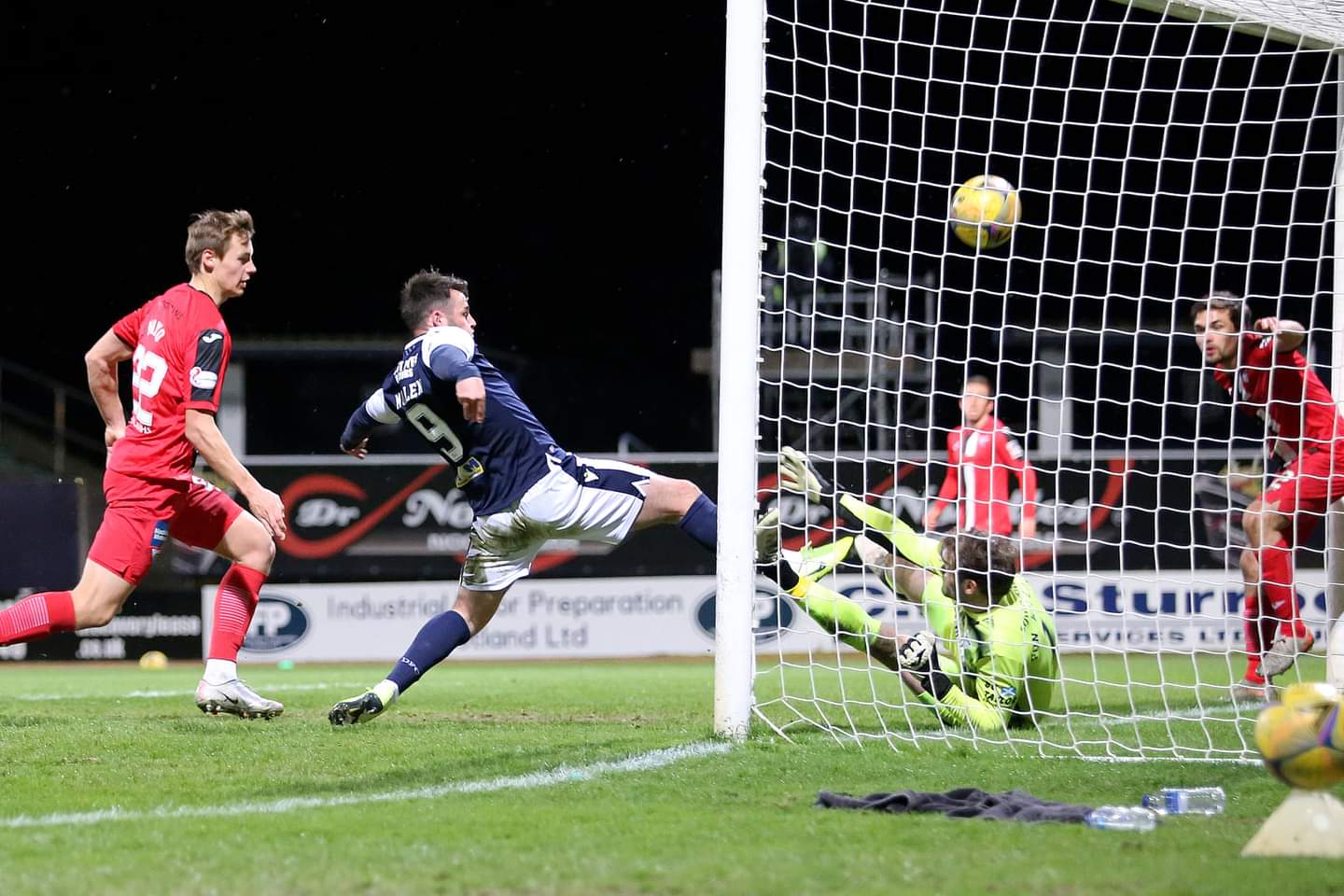 Dundee showed tremendous character to come from two goals down and beat Dunfermline Athletic 3-2 in a thrilling match at the Kilmac Stadium tonight. Kevin O’Hara and Craig Wighton scored for the Pars in the opening five minutes. The Dee didn’t crumble and Jason Cummings pulled a goal back before half time. The Dark Blues stormed at Dunfermline in the second half and were rewarded with two quick goals from substitute Danny Mullen and Lee Ashcroft. The Pars tried to fight back late in the match but the Dee held out for a thoroughly well deserved win.

There were two changes to the team that beat Alloa. Liam Fontaine returned in the place of Sam Fisher and Osman Sow came in for Danny Mullen.

The Dark Blues started by blundering into a nightmare and by the time they woke up they were 2-0 down. Both goals were excellent finishes, but preceded by awful defending.

After three minutes Joshua Edwards and Craig Wighton tried to work their way in from the left. Christie Elliott’s attempted interception sent the ball pinging towards the near post where Kevin O’HARA reacted superbly to whip the ball into Adam Legzdin’s top corner.

The Dark Blues had left themselves with a mountain to climb before they had crossed the half way line in earnest. The Dee’s attacking players had been no more than spectators while the Pars were helping themselves to their goals. But Dundee responded well and gradually played their way into the game.

Declan McDaid was the main man in Dundee’s early attacks. He cut inside from the left and had a shot blocked. He then crossed for Jason Cummings to head wide.

The Dark Blues should have pulled a goal back from a corner when Lee Ashcroft headed powerfully past the post from five yards. Fon Williams saved well from Paul McMullan’s low drive and Max Anderson’s follow up was blocked.

After half an hour the Dee had the goal they desperately needed to find before the interval. Anderson’s shot from 25 yards was deflected into the path of Osman Sow whose shot brought a fine save from Fon Williams. The Pars keeper surpassed that with a tremendous instinctive stop from Sow’s follow up, but Jascon CUMMINGS had kept running into the danger area, just in case, and was on the spot to nod the ball into the net from only a yard out.

Anderson made a good run in behind the Pars defence to get onto a Cummings header but miscued his shot. Osman Sow limped off late in the first half and was replaced by Danny Mullen.

Dundee remained on top and threw everything at Dunfermline late in the half. Anderson had another shot blocked and Ashcroft headed wide from close range after Paul McGowan had twisted and turned on the left wing before firing an inviting cross to the near post.

The Dark Blues returned after half time to pick up where they had left off in the first half. They turned the heat up on the Pars and blew them away in a blistering 20 minutes that won the game.

Cummings set up Mullen, whose first time shot was somehow brilliantly turned onto the crossbar by Fon Williams. It was no surprise when the equaliser arrived two minutes later. McGowan’s corner was met by Ashcroft’s header. Fon Williams’s saved superbly, but Danny MULLEN was on hand to batter the loose ball into the roof of the net.

Another two minutes and the Dee were in front. Again Paul McGowan took a corner from the left and Lee ASHCROFT scored with a great header from 10 yards. Little more than 10 minutes had passed since the restart and the Dee were not only in the lead, they were utterly dominant.

Declan McDaid and Jordan Marshall were running riot on the left, tearing holes in the Dunfermline defence with their clever running and interchanges.

The Pars escaped from a goalmouth scramble following another Dee corner and Mullen passed up a good chance, heading wide from McDaid’s cross. Dunfermline’s man of the match, Owain Fon Williams, kept them in the match with another excellent save, touching away Mullen’s header from a Marshall free kick.

The Pars had to replace the injured Paul Watson with Ewan Henderson, and sent on Declan McManus and Scott Banks in the place of Kevin O’Hara and Dom Thomas. At last they started to get to grips with Dundee’s attacking down the left and provide some support for the beleaguered right back Aaron Conway.

Dunfermline tried to fight back in the closing stages, and put the Dee under far more pressure than at any time since the horrible opening minutes. Despite the improvement they managed to get only one shot on target, a 30 yard free kick by Fraser Murray that Legzdins turned over the bar comfortably.

The Pars did send a dangerous ball across goal following good play on the right by Henderson, and Banks’ shot was turned away for a corner by McDaid’s great block. Apart from that Dundee coped with everything that the Pars tried.

In the last 15 minutes Dundee’s priority was protecting their lead rather than chasing more goals. Cummings tried to beat Fon Williams with a well struck effort from 22 yards, but the Welsh keeper saved well. The striker was replaced by Jonathan Afolabi late in the game, and Shaun Byurne came on for Max Anderson.

Dundee handled the closing stages professionally, keeping the ball away from their own penalty area. The five minutes injury time passed with mercifully little excitement and the final whistle sounded with Declan McDaid in possession 100 yards from his own goal.

The Dark Blues collapsed to gift the Pars a point in December, but they made up for it tonight. The game would have been over after only five minutes if the Dee had lost heart and accepted it wasn’t going to be their night. Instead the Dundee players picked themselves up off the floor and grafted their back into the match.

It took a while to get their game going, but the Dee kept improving throughout the first half. After half time they hit their best spell since the first half against Hearts at the end of December. The Dee were solid at the back, dominant in midfield, and relentlessly dangerous in attack.

The opening was awful, but the remaining 90 minutes gave us an excellent team performance. Earlier in the season Dundee might have caved in after the Pars’ sensational start. Tonight was very different, and hugely enjoyable for the Dee faithful.

We are back at Dens tonight and can't wait to get going after last week's win over Alloa.

Since I last wrote we've played three matches and we were disappointed to only come away with six points.

The defeat against Ayr United was tough to take but the response a few days later at the Indodrill Stadium was very pleasing.

Attitude was the big thing. Even if things are going against you the attitude still needs to be there. I can never question the players for work-rate and attitude and was proud of them because they had something about them.

It should be a given, competing from the word go. Most games we do. But sometimes we have a knock and something goes against us and we go under.

Alloa are a good team. At times they had chances but that team in previous weeks might have buckled. They have a lot about them and I am pleased for them.

They make it hard and Peter Grant has them playing well. But we stood tall and won the game and deserved the win. It will be another tough game tonight against a side who have done well this season.

A win today can give us a real boost heading into the final matches of the season.

It is all in our hands but we need consistency and belief and the kind of performance we had last Friday.

Enjoy the game, wherever you are watching from.