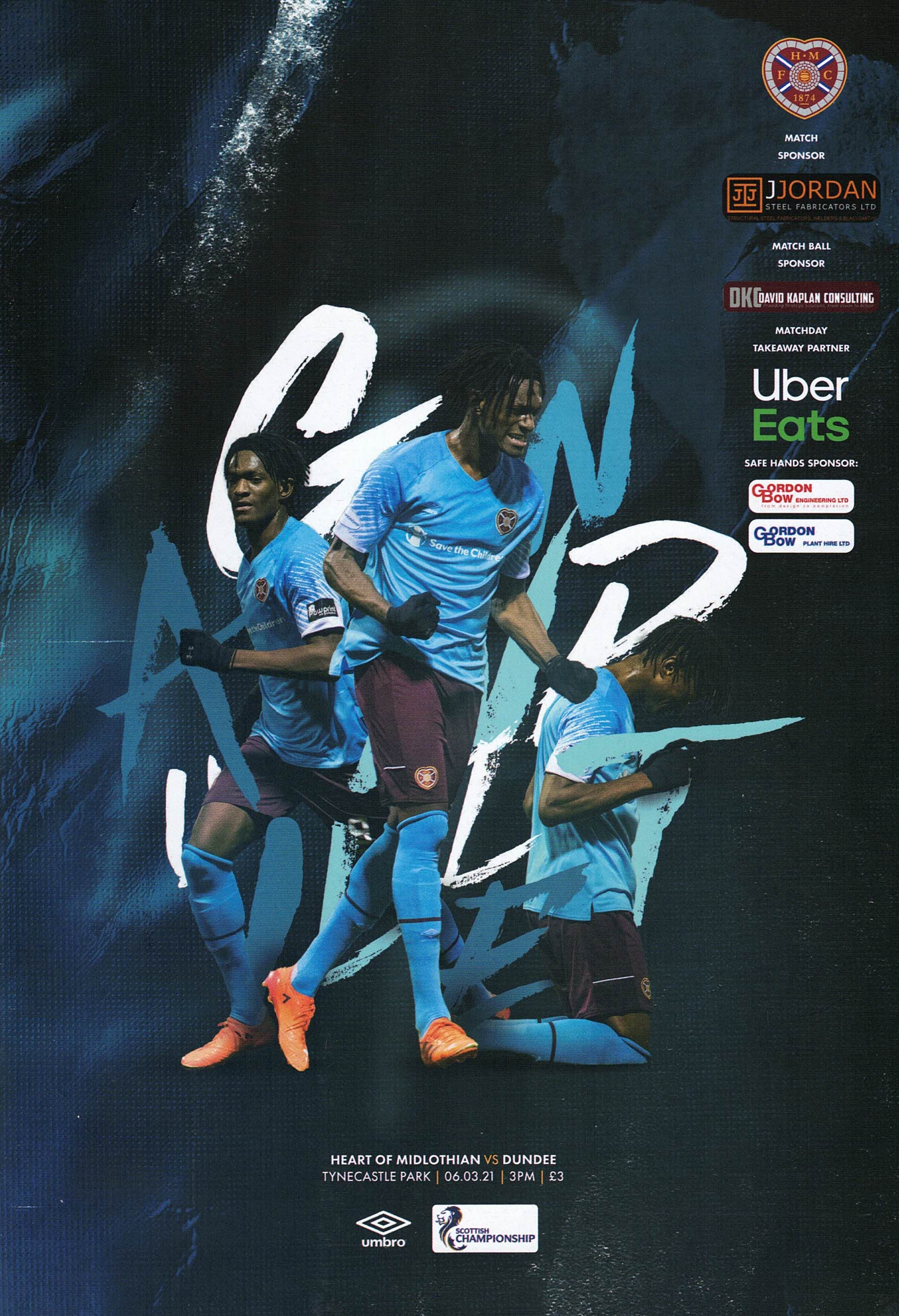 The Dark Blues were edged out 2-1 by league leaders Hearts at Tynecastle this afternoon. The Jam Tarts took a two goal lead through Andy Halliday in the first half and Armand Gnanduillet early in second half. Dundee came back strongly and Jason Cummings pulled a goal back from the penalty spot. Hearts substitute Peter Haring was sent off late in the game, but despite fierce pressure on the home goal the Dark Blues couldn’t find an equaliser.

Dundee were unchanged after beating Inverness on Tuesday. Hearts made two changes, bringing in Andy Irving and Armand Gnanduillet for Steven Naismith and Gervane Kastaneer.

The game got off to an open and entertaining start with Dundee looking for an early goal. The opening minutes were spent mainly in the home half. However, Hearts were first to build dangerous moves and twice sent dangerous crosses, from McAneff and Smith, flashing across Jack Hamilton’s goal with no Jambos on hand to make contact.

Dundee continued to look promising as they moved into the Hearts half, but couldn’t find a way to trouble home goalie Craig Gordon. The Jam Tarts repeatedly worked their way into good positions out wide without exploiting them. Halliday sent a cross, or shot, curling across the Dundee goal and Gnanduillet couldn’t make contact with a low ball across from Smith.

Ten minutes from half time Hearts got it right when Smith sent a long pass down the right. Gnanduillet took the ball, turned and fired over a fine cross for HALLIDAY to score with a diving header from six yards.

Dundee could have been deeper in trouble only a minute later but Mackay-Steven scuffed his shot from another dangerous Smith cross, allowing Hamilton to save easily.

After a difficult spell Dundee perked up and came agonisngly close to equalising late in the first half. A free kick broke to Paul McGowan 20 yards from goal. He took a touch and sent a dipping shot over Gordon and off the underside of the crossbar. Paul McMullan was following up, but he couldn’t keep his header down and sent the ball over the bar rather than into the empty net.

Hearts were keen to kill the game off and launched themselves at the Dee defence with real menace after the restart. The Dark Blues had a couple of huge escapes. A quick Hearts break by Boyce and Gnanduillet set up an open goal for Mackay-Steven who fluffed his shot so badly that Hamilton was able to collect the ball before it bobbled wide.

Boyce then lashed a 12 yard shot against the crossbar after a Halliday dummy opened up the chance. Dundee broke away and had a fleeting half chance for Max Anderson, whose shot was blocked by Kingsley.

Dundee’s luck turned against them after 58 minutes. Mackay-Stevens made amends for his howler with a fine, sweeping cross from the left that took out the Dee central defence. GNANDUILLET shot first time, Hamilton saved well, but the rebound struck the Jambo striker on the shin and looped into the net. The finish might have been fortunate, but Hearts had done enough to deserve that spot of luck.

Fleetingly it looked as if the game would run away from the Dee. Hearts worked Boyce into space on the left of the penalty area but his dangerous ball into the goalmouth was cleared by Liam Fontaine.

Osman Sow replaced Danny Mullen, who had taken a knock in the first half, and from the hour mark onwards Dundee took the game increasingly to Hearts, forcing the home side back.

Dundee badly needed a quick goal to get back into the game, and it arrived with a penalty after 63 minutes. Max Anderson ran into the box onto a clever pass by Declan McDaid, took a good first touch and was scythed down by a mistimed tackle by Mihai Popescu. Jason CUMMINGS scored, sending Gordon the wrong way from the penalty spot.

Dundee now looked far more dangerous than they had done at any point beforehand. Sow headed wide from a Marshall cross, and his close range shot was blocked by Gordon after the Hearts keeper had spilled a Cummings shot.

Jonathan Afolabi replaced Max Anderson for the last 15 minutes, giving Hearts the problem of dealing with three strikers. The home side meanwhile tried to shore up the midfield, sending on White for Gnanduillet. Despite being outnumbered in the middle of the park the Dark Blues were still able to control the game and create more chances.

The two substitutes both forced fine saves from Gordon in rapid succession. First the Jambo goalie kept Sow’s shot out with his feet, then reacted superbly to save, again with his feet, from Afolabi’s follow up.

Gordon was being kept far busier than Jack Hamilton, and had to race from his penalty area to head clear from Afolabi.

Rather belatedly Hearts sent on a third substitute, Peter Haring, a midfielder with extensive experience as a central defender, to try and nullify the threat from the three Dee strikers. Dundee were still dangerous, however, and Cummings headed wide from a good cross by Marshall.

Haring may have been the last player onto the park, but he was the first to leave. Five minutes after his arrival he stormed off angrily when Mr Robertson awarded him a straight red for a wild and high lunge at McDaid.

That could have cost Hearts dearly as Dundee threw men forward in injury time. The home defence failed to clear but the ball fell to Liam Fontaine rather than a striker, and the shot lacked the power or accuracy to elude Gordon.

After 60 minutes this game looked as if it might turn into another Tynecastle nightmare for the Dee. 30 minutes later it was the Jam Tarts who were desperate to hear the final whistle and needing to reorganise to try and keep the Dark Blues at bay.

Over the full 95 minutes Hearts edged the match, but Dundee finished much the stronger side. If the Dark Blues had been able to snatch an equaliser with time to chase a winner we might have had a very entertaining finish. There was plenty to admire and enjoy about the way that Dundee set about the last half hour, but if you give the league leaders a two goal start then you are very unlikely to get anything from a match.