Alan Gilzean gave Dundee a flying start with a first-minute goal, and Dundee were 3-1 ahead in 28 minutes through Gilzean and Penman, but the Yugoslavs fought back to make it 3-3 at half-time. Their centre, Vladimir Lukaric, had the "hat-trick."

With Robertson recovered from his indisposition, Dundee were at full strength.

The temperature was in the 70's when Dundee started with a sensational goal.

In two minutes Gilzean flicked into the net from a Robertson pass to register their first goal in the tourney.

But within a minute centre Lukaric beat Liney with a fast shot into the roof of the net. In six minutes Gilzean restored Dundee's lead.

Penman slammed a Smith cross against a defender and the ball broke to the inside-left, who gave the keeper no chance from six yards.

The game settled down after this with Dundee feeling their way in their new defensive set up, but looking really dangerous in attack.

Cousin had a good try with a header, then in 21 minutes Robertson missed a great chance to put the Dens Parkers further ahead.

A Penman shot shot came off the bar to Robertson 10 yards out with only the keeper to beat. But, with plenty of time to steady, he shot wildly over the bar. Gilzean next wandered down the by-line with three defenders in his wake. but he cut the ball too far back for Cousin and Penman

Dundee were turning on the heat now, and it was no surprise when they scored again.

In the 28th minute Cousin beat the right-back before slipping to Gilzean. A quick transfer to Penman, and the keeper had no chance with Andy's low drive from 12 yards.

Hajdukt fought back. Ure had to head clear and centre Lukaric notched his second goal with a shot into the top right corner of the net from 18 yards.

Lukaric again in 40 minutes at least 30 yards out and from a difficult angle, he shot for goal. There appeared to be no danger, Liney actually appeared to have the ball In his hands, but somehow he allowed it to squirm into the net for the equaliser.

The Hajduk keeper foiled Penman twice within three minutes of the restart after good moves involving Wishart and Gilzean.

Smith and the Hajduk left back fell going for a high ball and the back punched Gordon on the face when they got up. Luckily for the defender, the ref wasn't looking!

This was the only display of feeling so far.

Hajduk for the first time were taking control of the game, as Dundee appeared to feel the strain at this stage. But Dundee again came close to scoring in 63 minutes, when a Seith 30-yard shot forced the keeper at full stretch to concede a corner.

Four minutes later Smith had a great chance when the defence missed a cross from the left. He steadied himself, but shot weakly past from six yards.

Then Gilzean bored his way right into the penalty box, but his shot hit the side net.

After the hectic first half it was not surprising play had slowed down.

Towards the end Hajduk were almost completely on the defensive, with Dundee trying desperately to get ahead.

In the other game in Dundee's section Gualalajara (Mexico) beat Reutlingen (West Germany) 2-0, after a goalless first half. 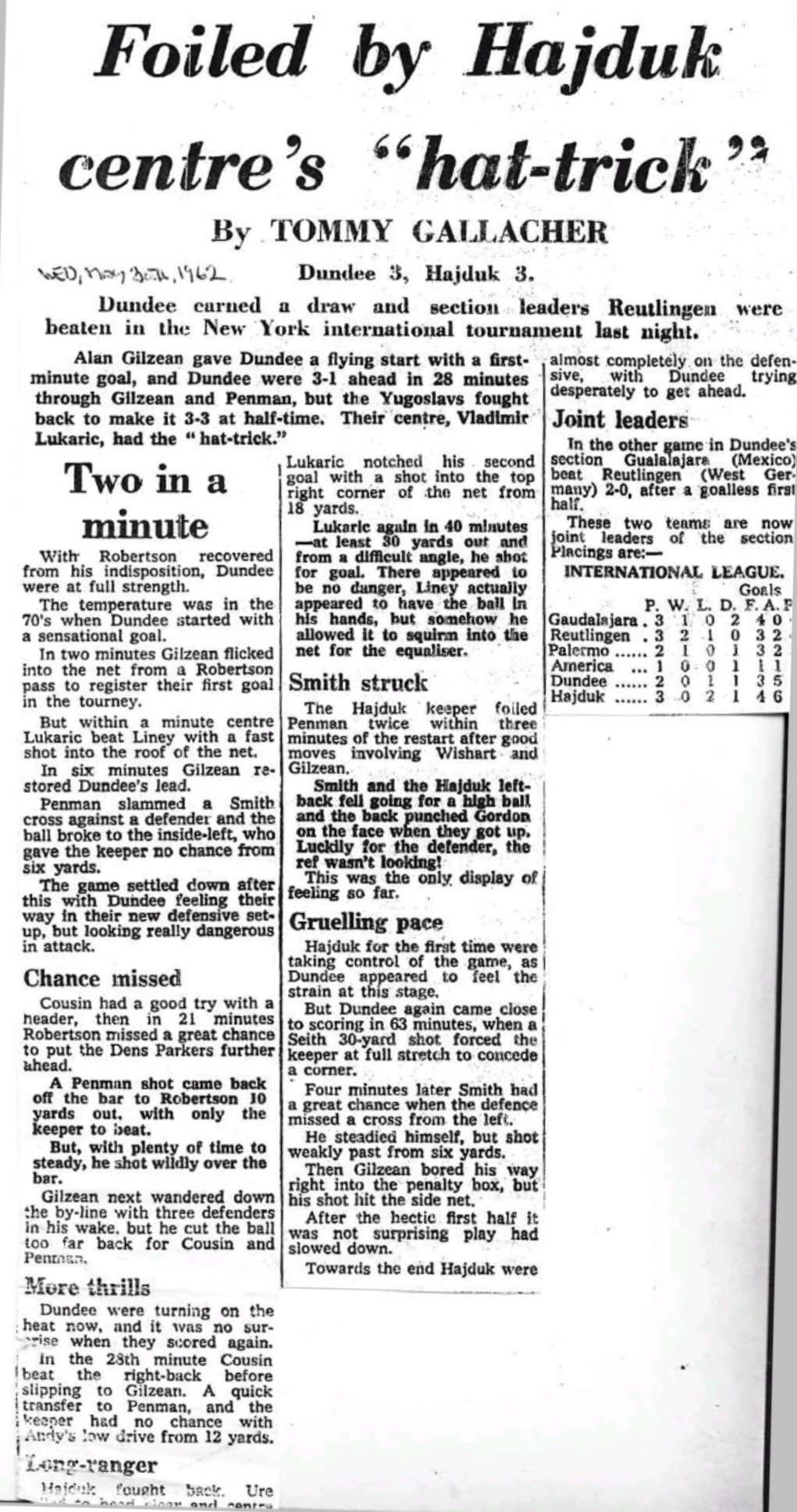