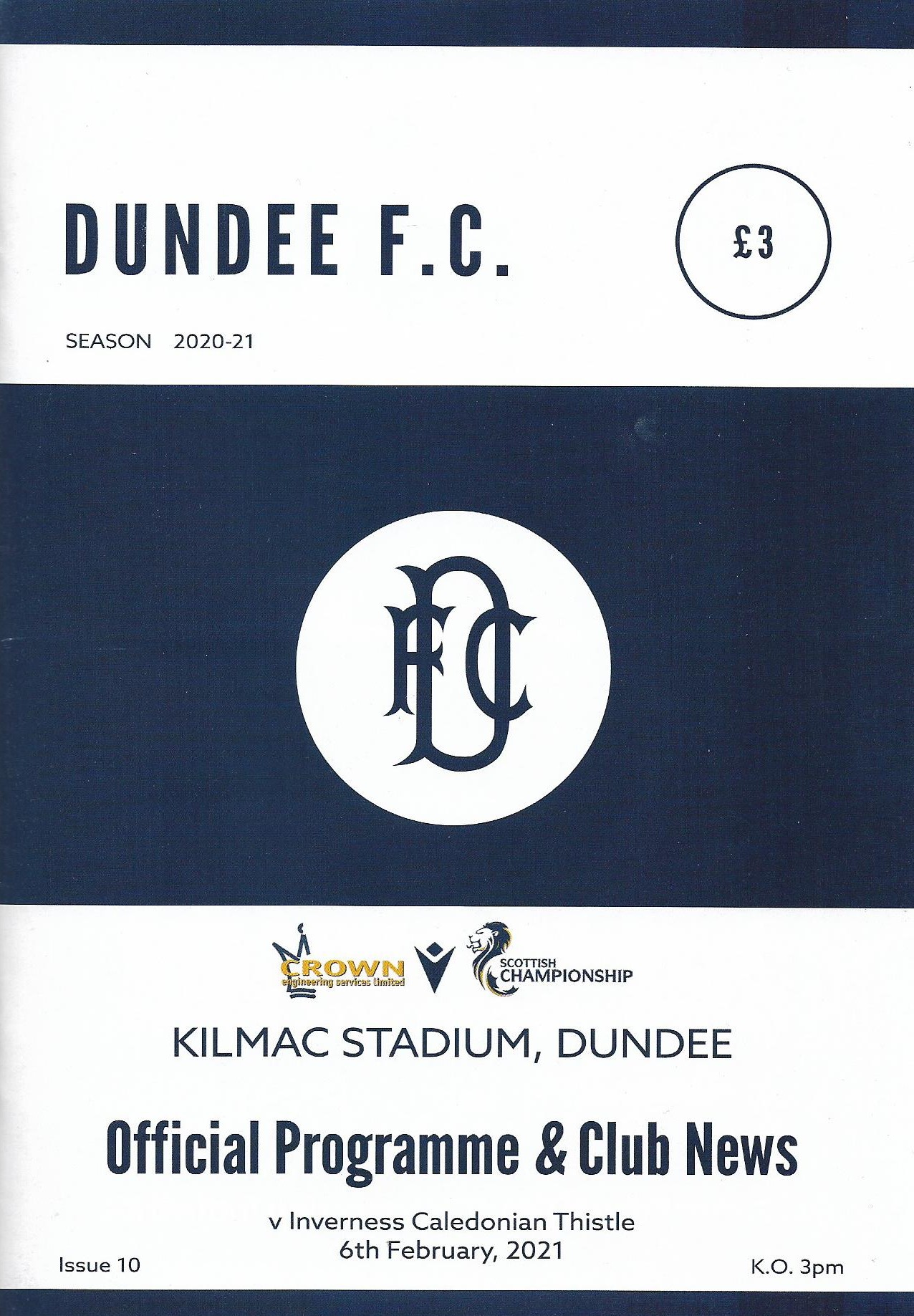 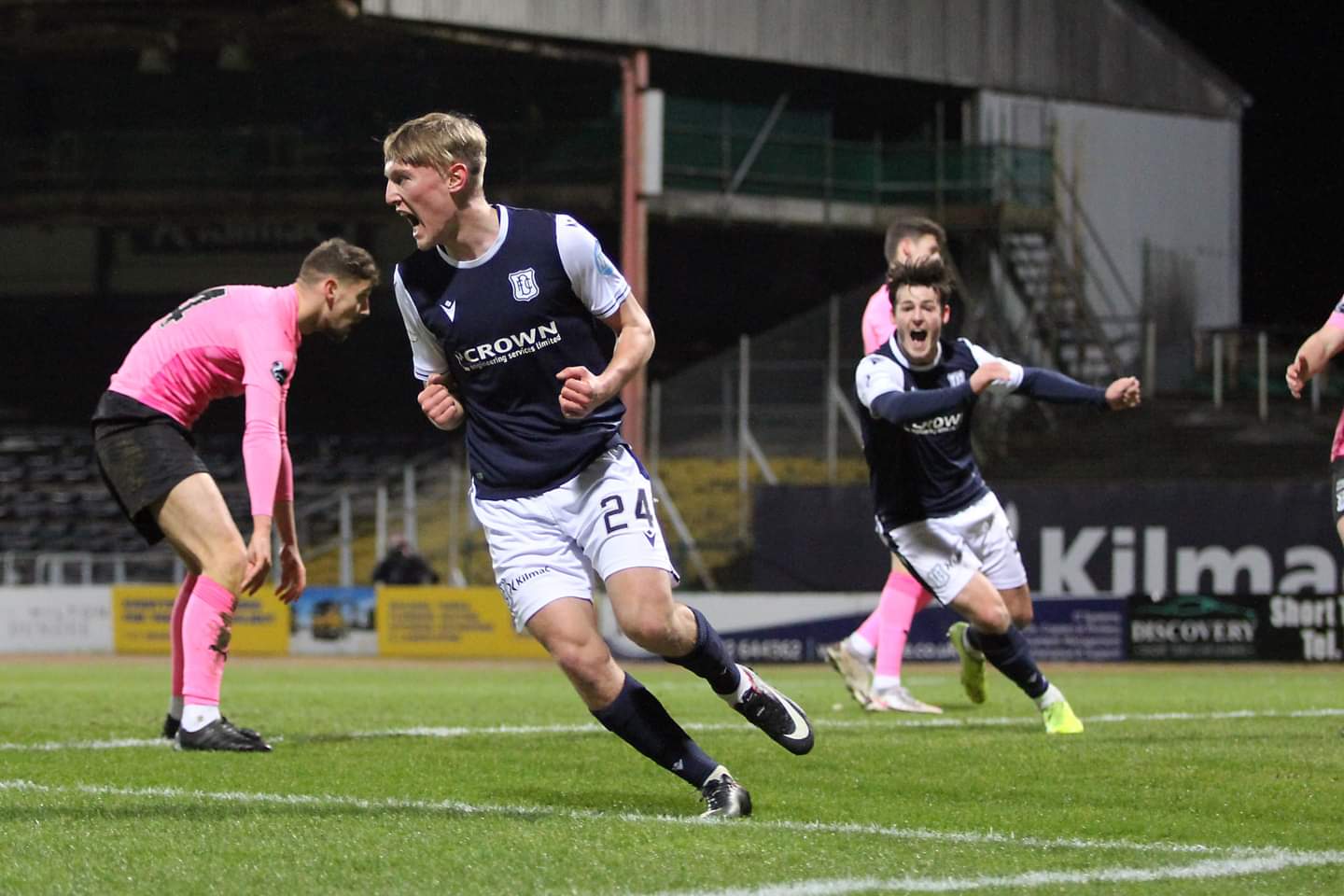 Dundee got their season back on track with a 2-1 win over Inverness Caley Thistle at the Kilmac Stadium. Max Anderson’s first senior goal gave the Dee an early lead and Jason Cummings added the second as the referee was about to blow the half time whistle. Nikolay Todorov pulled a goal back for Inverness in the second half but the Dark Blues held on for a deserved win.

James McPake made three changes from the team that started the match at Morton, opting for the same 11 players who finished that game. Max Anderson, Declan McDaid and Danny Mullen all retained their places after coming on as substitutes for Shaun Byrne, Fin Robertson and Osman Sow.

Caley Thistle started brightly, doing all the attacking in the opening minutes without creating any goal threat. It took the Dee five minutes to cross the halfway line in earnest, but they immediately looked dangerous.

Paul McGowan skyed a shot from 20 yards at the end of a smart move. A minute later Declan McDaid cut in from the left and whipped a curling shot across goal that Mark Ridgers did well to push round the post.

Dundee took the lead after 10 minutes with a well crafted goal, started by McDaid who swept a fine pass out to the right, setting up McMullan to beat his man and play a low cross to the near post. Max Anderson timed his run well to take a first time shot. Ridgers saved instinctively, but ANDERSON’s reflexes were equally sharp and he guided the rebound straight back into the net.

The Dark Blues continued to have the better of the match, but had to endure a couple of worrying moments at the back. Jack Hamilton had to come out of his penalty area to clear, and didn’t get enough distance on the clearance. Shane Sutherland tried a snapshot from 40 yards but in his haste he failed to connect cleanly and his effort bobbled wide. Hamilton had to be alert a few minutes later when a long ball was allowed to travel too far and the goalie had to block at the feet of Miles Storey.

After those scares Dundee looked more comfortable at the back and constantly threatened to add to their lead. The Dark Blues regularly played tricky crosses into the penalty area and Inverness’s defending was unconvincing as the ball often bounced around before being partially cleared.

McDaid was combining effectively on the left with Jordan Marshall, and the pair set up a half chance for Jason Cummings, who took one touch too many before being crowded out.

Right at the end of the first half Dundee grabbed the second goal they had been threatening. McDaid sent Marshall clear and when the cross arrived in the six yard box Mullen’s challenge created enough confusion for Jason CUMMINGS to turn and sneak a true poacher’s goal past Ridger’s dive.

The Dark Blues lost Mullen at the start of the second half after he received lengthy treatment for a head knock. Osman Sow came on to replace him.

Dundee continued to dominate, playing some inventive attacking football, but without being able to finish their moves, or create clear chances. The approach play might have been promising, but the finishing was wayward.

Inverness had offered little in attack aside from an angled shot by Storey that Hamilton blocked. But with 20 minutes to go they started to move forward with more urgency and soon had their reward. Cameron Harper curled in a good cross from the left and substitute Nikolay TODOROV scored with a powerful header from eight yards after 75 minutes.

Dundee reacted well to the setback and didn’t panic or retreat into a defensive shell. They kept playing calmly, probing for a third goal. Caley Thistle couldn’t quite use their goal to build up momentum for a late assault on Dundee and they didn’t create any serious danger in the remaining 20 minutes of play.

As the clock ticked over into injury time Harper found himself in space to cross again from the left, but Jack Hamilton took the high cross superbly under pressure. Happily for the Dee injury time passed without any thrills and the Dark Blues had the three points that they deserved.

There was a better balance to the team tonight and the formation suited the players. Max Anderson’s energy and mobility livened up the midfield with his aggression, control and willingness to make late runs into the penalty area. Declan McDaid made a big contribution and was involved in the build up to both goals. Paul McMullan, his counterpart on the right wing, added his fourth assist in only his fourth game. The combination of Jason Cummings leading the line, and Danny Mullen hovering behind in the number 10 role proved effective. It was a pity that Dundee couldn’t hold out for a clean sheet, but it was pleasing to see the defence handle the closing stages well.

This was a big win for the Dee, who played some good attacking football tonight. There is, however, still plenty of room for improvement. In the last 11 games neither the Dark Blues nor the opposition have been able to keep a clean sheet. This Dundee team can certainly score the goals to keep Dundee in the play-off places, but they will have to cut back on the goals they are conceding. There is always hope, but this game offered a bit of promise as well.

It's been a frustrating period recently with games called off, injuries and late call offs due to illness.

Trying to navigate all of these things and the January transfer window in the current climate has been tough but I'm eased with how the squad sits for the run In.

We tried to do our business quickly and I was delighted to have Jason, Malachi and Paul all join late last week.

The one downside to that is we didn't have as much time as we would have liked to get everyone up to speed ahead of the Raith match.

We tried to squeeze a lot into training on the Friday, on the way we were going to play, and I think it looked a bit mixed up.

We certainly will be better when we get time to work with the players, on the training pitch, first and foremost.

I think the better team won the game at Stark's Park. We knew it was always going to be tough.

It was a frustrating couple of days for us, a frustrating morning actually, in terms of Lee Ashcroft calling off ill and Liam Fontaine failing a late fitness test.

Raith are a good team and they proved it at Tynecastle last week. The bugbear is we conceded from two set plays and we need to nail that down.

I couldn't fault the effort, the workrate or anything that my players have given me and they're hurting because they've been on a run of eight games unbeaten and they wanted to keep that run going.

We have got a big couple of weeks coming up and we need to react, and react in a positive manner.