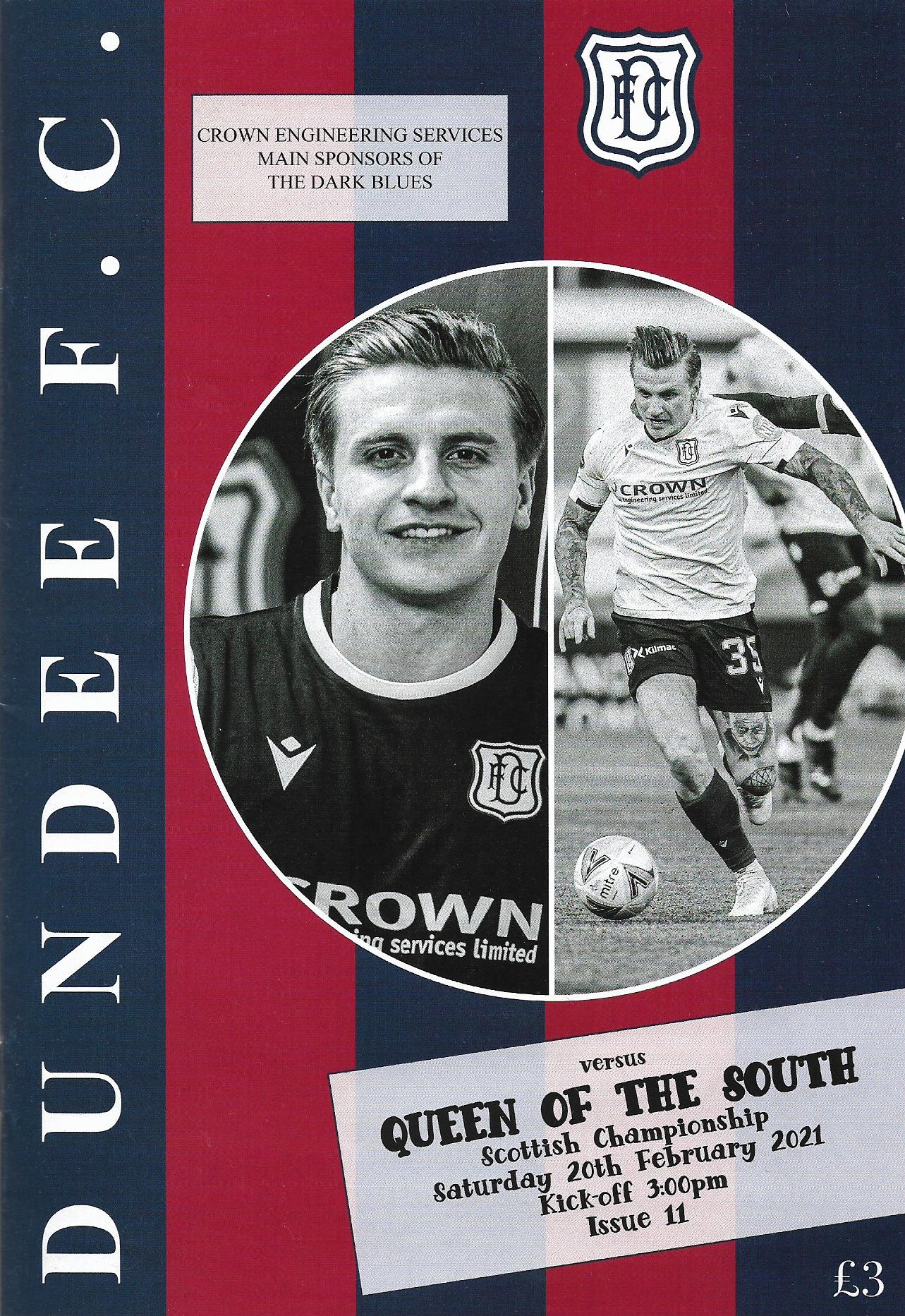 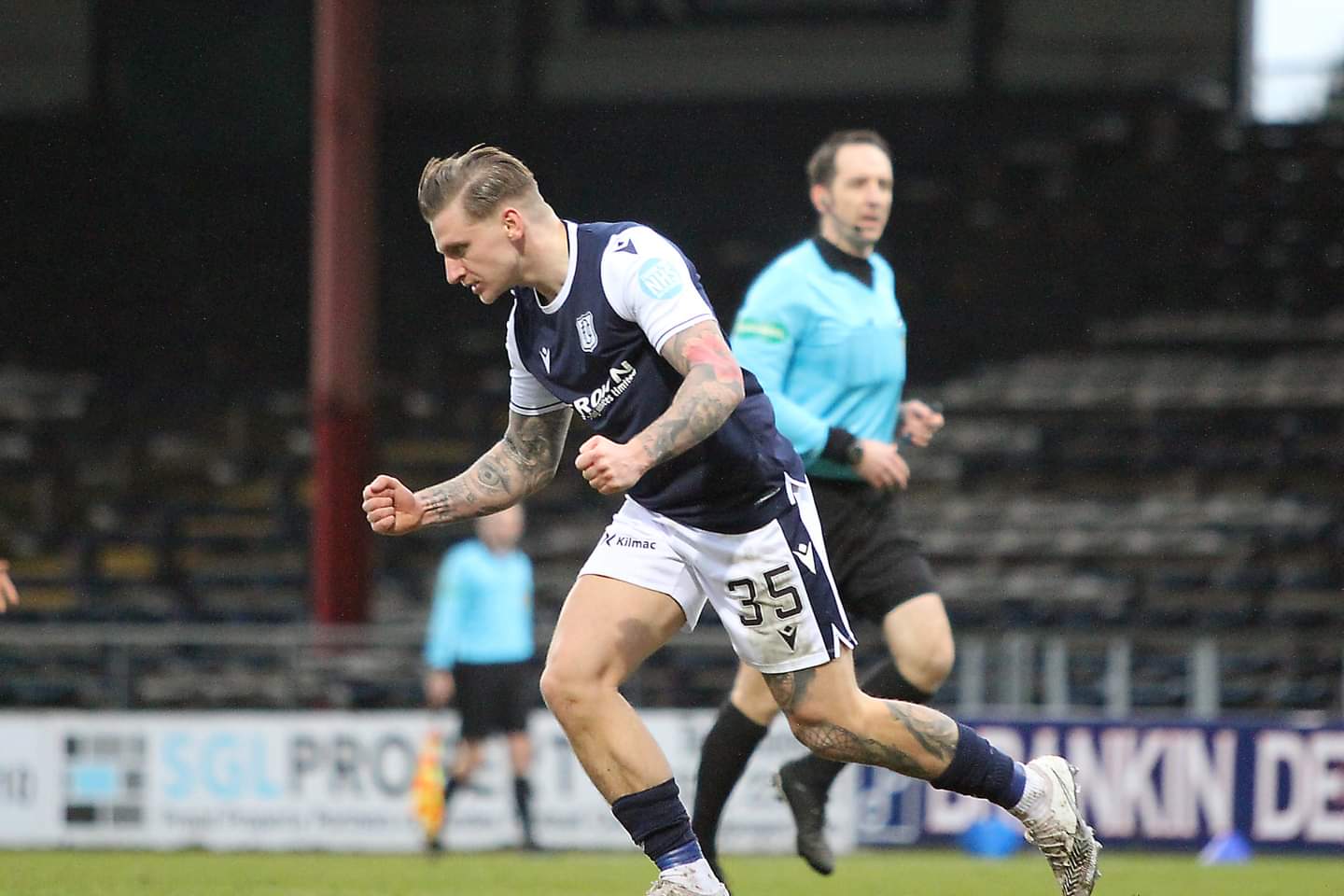 Dundee went down 3-2 to Queen of the South at the Kilmac Stadium in a performance featuring too many defensive errors. Queens took the lead with an early penalty and added a second from an unfortunate Jack Hamilton own goal. Jason Cummings pulled a goal back early in the second half but Willie Gibson restored Queens’ two goal lead. Jordan Marshall provided some hope with a late goal, but the Dee couldn’t save the game.

With the injury list largely clearing Dundee made four changes following the defeat away to Raith Rovers. Cammy Kerr, Lee Ashcroft and Liam Fontaine returned to the starting 11 and Jason Cummings was given his first start. Youngsters Sam Fisher and Malachi Fagan-Walcott made way for the returning regular central defenders, while Christie Elliott and Callum Moore also dropped out.

Dundee handicapped themselves by allowing Queens a goal of a start with a penalty conceded after only 30 seconds. The Dark Blues lost possession almost from the kick off and Isaiah Jones was floored rather easily on the right side of the penalty area by Lee Ashcroft’s barge or shoulder charge, depending on your perspective. Ayo OBILEYE tucked the spot kick away.

Queens looked the more dangerous side in the opening quarter of an hour in which Dundee could not get their game started. After 11 minute there was an alarming scramble in the home penalty after Queens broke down the left. Cammy Kerr slipped and Jones was able cut the ball back, but the covering Dee defenders were able to block a flurry of shots before clearing.

The Dark Blues started to grind up through the gears and exert some pressure on the Doonhamers without looking convincing or threatening as Queens were happy to sit back and contain Dundee. The Dee won a succession of corners, but the none of them troubled the organised away defence.

The nearest that Dundee came to a goal in the first half hour was a blast from 18 yards by Charlie Adam that flew a couple of feet over the bar.

Dundee have had trouble defending set pieces in recent months. After 36 minutes there was another dreadful example. Queens had a free kick wide on the right, just inside the Dee half. The ball was played down the wing for East to cross, and Rhys Breen was unmarked six yards out. His header struck the inside of Hamilton’s right hand post, rebounded off the keeper’s shins and into the net.

Jason Cummings almost pulled a goal back quickly, but his shot from the edge of the penalty area was narrowly off target.

The Dark Blues sent on Danny Mullen in the place of Shaun Byrne at half time to try and inject some life into a sluggish attack. The substitute should have scored almost immediately, but shanked his shot wide in front of an open goal after Osman Sow had turned a Kerr cross into his path.

The goal Dundee desperately needed was delayed for only a minute, however. Jason CUMMINGS scored his first goal for the club after winning a race for a long ball. He flicked his shot past the onrushing goalkeeper Ferguson and Buchanan couldn’t get back in time to stop the ball crossing the line.

Dundee were now playing with more pace and energy, threatening to equalise every time they moved forward. Sow couldn’t make enough contact with a near post header and the ball flew across goal. Sow then saw a fierce 25 yard effort fly wide as the Dee had a spell in total control of the game.

The game’s turning point came just after the hour when Dundee had a goal controversially disallowed. Ferguson saved well from a Mullen volley, but lost the ball on the goal line. Sow forced it into the net, but referee Mr Cook spotted a foul somewhere in the melee.

Dundee lost their momentum after that setback. The attacks were less threatening and Queens looked more comfortable again, pulling men back and attacking only on the break.

The Dee were given a sharp warning when Willie Gibson was allowed far too much space to run through from midfield before firing over the crossbar. Dundee failed to take heed and were duly punished after 78 minutes. GIBSON came forward again, and with no real challenge had a pop from 25 yards. This time his effort flew into Hamilton’s top right corner. It was a terrific goal, but with a significant amount of passive assistance from the Dark Blues.

Three minutes later Jordan MARSHALL pulled a goal back, his first for the Dee, heading home at the far post after a fine run and cross by Paul McMullan.

There were still 10 minutes left but Dundee couldn’t salvage a point despite twice going very close. Substitute Jonathan Afolabi didn’t get a touch on a Mullen cross right in front of goal and the ball drifted past the far post. In injury time Cummings turned and shot from six yards following a long throw and the ball spun off a defender and over the bar.

In recent games the goals that Dundee have conceded have either been spectacular solo efforts, or gifts to the opposition. This was the case again today. There may have been an element of poor luck with the soft penalty and the disallowed goal. But if Dundee had defended properly all three Queens goals would have been avoided. The Dee not only missed some decent chances, they failed time and again to get the right cross or pass into the penalty area from good positions. This defeat, the second in a row, therefore has to go down as self-inflicted, the result of the Dark Blues’ own failings. If luck was a factor Dundee brought it on themselves.

I wrote in my last programme note that no one will have read get that it's been a frustrating period and we added to that last weekend with another match postponed.

This afternoon we hope to get back to action after a couple of weeks of wild weather.

The Regional Performance Centre at Caird Park has been fantastic for us over the last month or so, allowing us to get indoor and continue to train as normal.

A positive of the period of no games has been that we know have injured players back and a good period of training into the new signings. They've all integrated well and I'm looking forward to seeing them in action.

It will be a tough game this afternoon. Last time we faced Queens they were struggling little but are always a dangerous outfit.

This time they are coming into the match on a good run of form that has seen them jump the table.

They were a couple of minutes away from a win against Hearts last Friday and got a good midweek win away to Inverness.

We know as always we'll have to be at our best to get back to winning ways and we are confident we will do that today. Enjoy the game, wherever you are watching from.