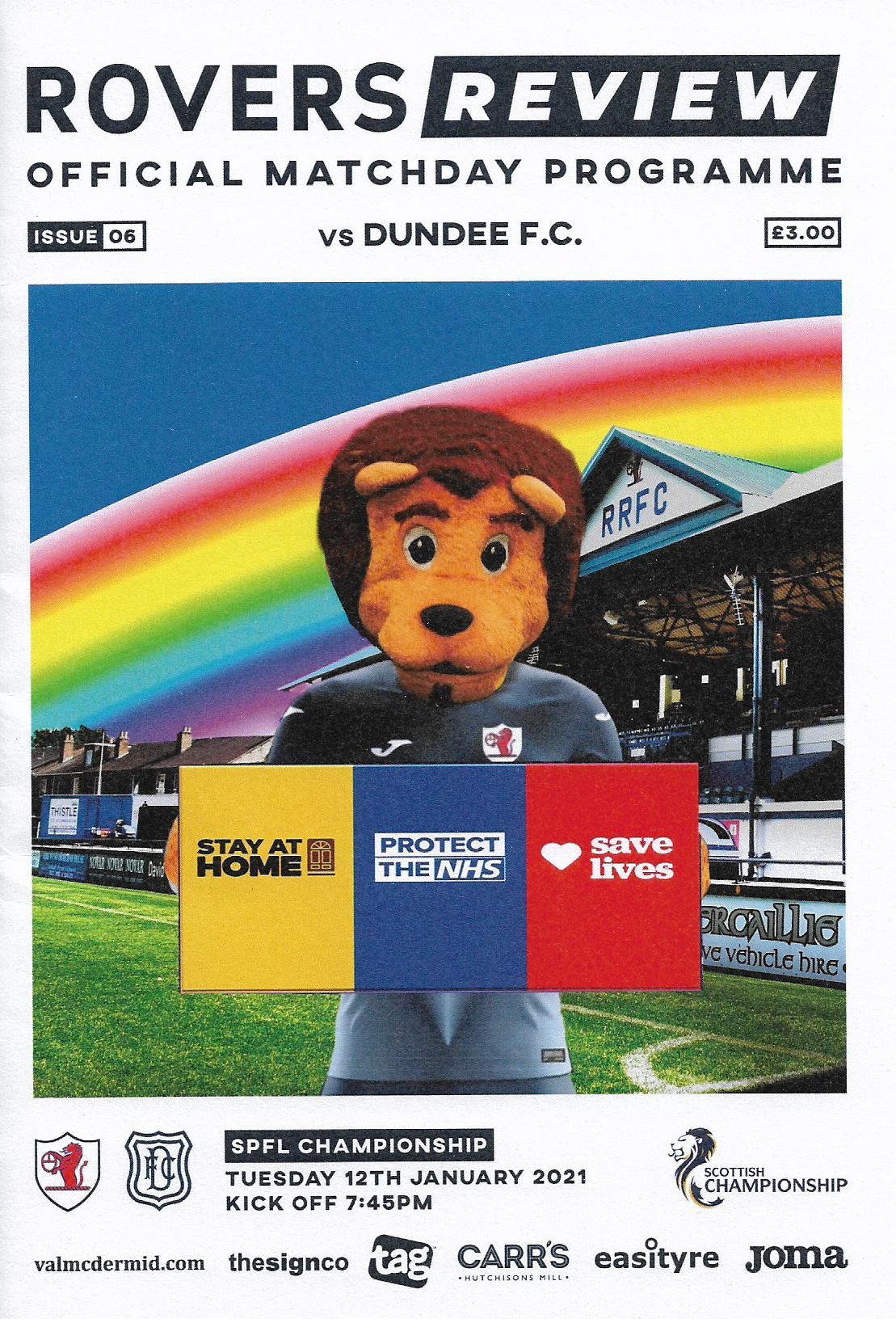 Dundee’s unbeaten run came to an end in Kirkcaldy with a 3-1 defeat against Raith Rovers. The Dark Blues got off to a bright start, taking an early lead from Osman Sow, but that was the end of the good news. Kyle Benedictus equalised for Rovers midway through the first half. Cracking goals from Regham Tumilty and Kai Kennedy settled the match early in the second half and the Dee couldn’t find any way back.

The Dark Blues line-was disrupted by injury and three players made their debuts. Malachi Fagan-Walcott and Sam Fisher formed the central defence pairing, while Paul McMullan came into the attack. Callum Moore was given his first start of the season, in midfield. Liam Fontaine, Jordan McGhee and Jordon Forster were all injured, and Lee Ashcroft was ill.

Rovers made two changes from the team beaten by Hearts on Tuesday. Dylan Tait replaced the suspended Regan Hendry in midfield and new loan signing Timmy Abraham started in the place of striker Manny Duku.

Paul McMullan got his Dee career off to a fine start by providing an assist after only five minutes. He found space on the right to take Charlie Adam’s and sent a low cross into the six yard box. Osman SOW opened the scoring by stabbing the ball past MacDonald.

It was all looking promising for the Dee with that excellent start. Rovers offered no real threat in the opening quarter of an hour while Dundee probed promisingly. McMullan was involved constantly, often on the end of Adam passes.

Although Raith hadn’t troubled the Dee defence in open play they had looked more dangerous from the two early corners they won. After 22 minutes they equalised from another corner that the youthful Dee defence handled poorly. Rovers worked a short corner, and Kyle BENEDICTUS met Kennedy’s cross at the near post to equalise with a firm header.

The goal changed the game, and Rovers were the better side for the rest of the first half. They were more energetic and creative in midfield, and used the flanks well.

Despite Rovers’ improvement they created only one chance in open play in the first half. Timmy Abraham’s fierce shot required a good save by Jack Hamilton after Kai Kennedy put the Dee defence in trouble when he beat Christie Elliott on the left wing.

The first half had only one more shot on target, and that was a 20 yard effort from Kennedy that Hamilton beat away. The 18 year old Kennedy, on loan from Rangers, was a clear danger to the Dee defence, and that threat was realised in the second half.

The Dark Blues started the second half promisingly, pushing Rovers back, buzzing around the home penalty area, trying passes to prise the defence open.

That promise quickly evaporated, and when Raith took the lead 10 minutes after the restart Dundee fell out of the game.

Rovers played another short corner that had the Dundee defence in trouble, but they managed to clear. Sadly for the Dee the clearance went only as far as right back Reghan TUMILTY, who had been covering in the centre circle. He ran in to take a touch, and let rip from 30 yards, sending a dipping shot flying inside Hamilton’s right hand post.

On the hour mark Kai KENNEDY delivered the sort of goal from the left wing that he had been threatening. After skipping inside Elliott he scored with a beautifully flighted curler around Hamilton.

Dundee replaced Paul McMullan with Jason Cummings, and then Shaun Byrne with Danny Mullen. It made no difference. The rest of the game will vanish quickly from the memory as neither side could do anything to worry the goalkeepers.

With a two goal lead Rovers were quite happy to see the game out, grafting away, keeping their shape and closing the Dee down. Dundee had very little to offer, trying to pass their way through an un-cooperative home defence, and sending in crosses that were dealt with competently by Rovers. Raith had to replace Benedictus with another ex-Dee, Iain Davidson, between the second and third goals, but the change was handled seamlessly by the Rovers defence.

The Dark Blues had a couple of efforts that barely counted as half chances. Sow stretched to reach an Adam free kick, but couldn’t connect properly and turned the ball wide. Cummings took a Sow knock-down and hit the side netting from a very tight angle.

Raith had little trouble defending their lead until the final whistle. Their win was fully deserved, and not just for the quality of their second half goals. If anything their football in the first half after the equaliser was better than the second half performance, but their game management after the third goal was impeccable.

Dundee on the other hand had no answer after falling behind. They never looked capable of breaking Rovers down, and their ample possession in the last half hour was largely wasted.

The young central defenders might be disappointed to lose three goals, but in open play they coped well. The set pieces were a problem, but there was little they could do about the second half goals. The real problems were further forward on a day when the Dark Blues failed to create a good chance after their fifth minute opener.