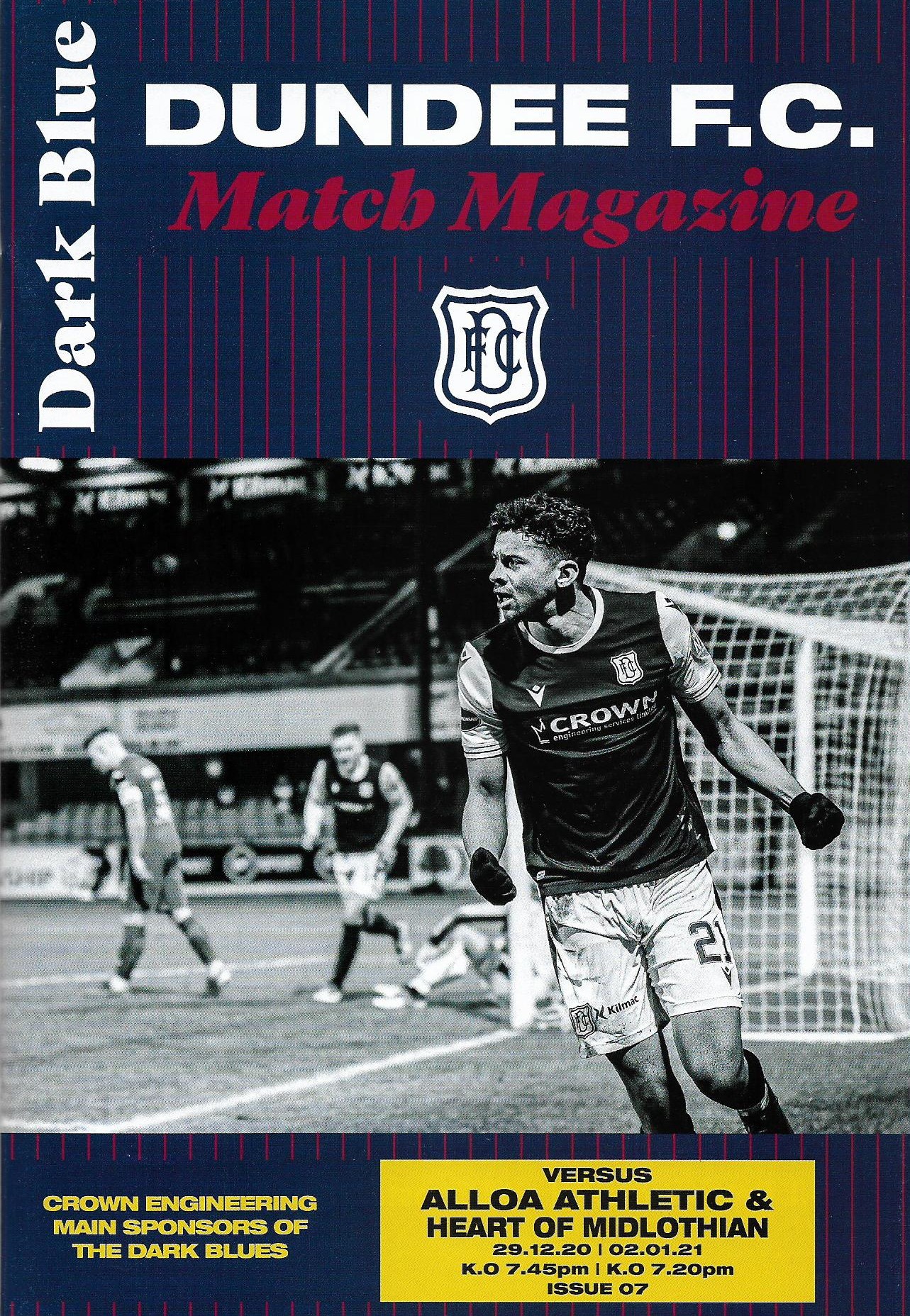 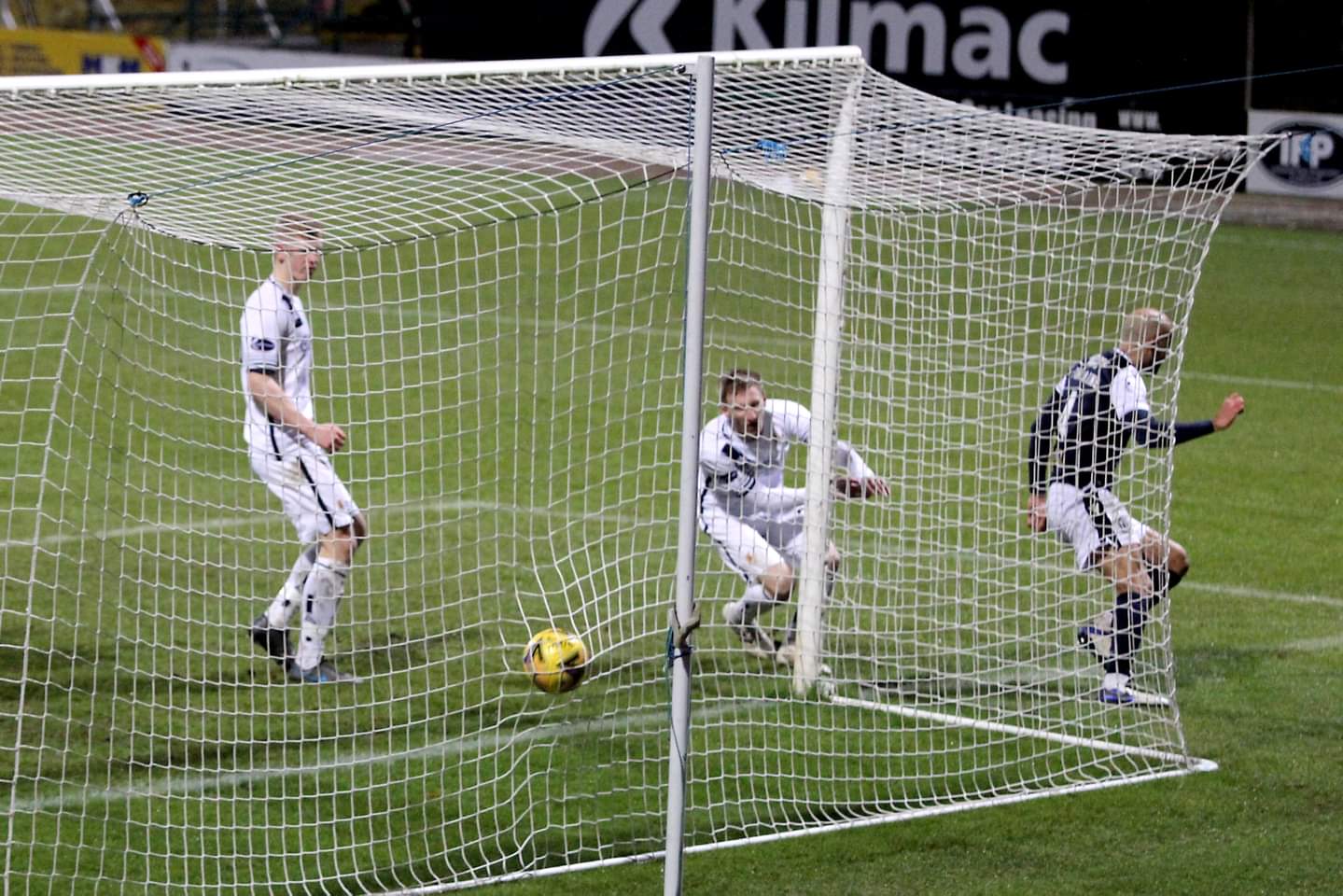 Dundee moved up to third place in the Championship with a 3-1 victory over Alloa Athletic at the Kilmac Stadium. The Dark Blues overcame the loss of an early goal by Steven Hetherington to transform the game with a fine second half performance. Osman Sow equalised shortly after the restart. Liam Fontaine quickly put the Dee ahead and Sow’s second goal completed the scoring.

The Dark Blues’ only change from the team that beat Queen of the South was Declan McDaid starting in the place of Danny Mullen. The Wasps also made one change, Reece Willison replacing Neil Parry in goal.

On a frosty pitch neither side offered any serious attacking threat in the opening minutes. The only remotely convincing attack ended with Charlie Adam heading over the Alloa crossbar from Paul McGowan’s cross.

After 11 minutes the Dee gifted the Wasps a dreadful opening goal. Christie Elliott’s headed backpass went straight into the path of Steven HETHERINGTON who had ample time and space to shoot past Jack Hamilton.

Dundee responded well to the setback and almost equalised within a minute. Alloa’s goalkeeper Reece Willison reacted instinctively with his feet on the goal line to keep out Declan McDaid’s angled shot.

Alloa barely crossed the half way line for the rest of the first half as Dundee kept plugging away at their defence. The Wasps sat back, conceding the midfield to Dundee, concentrating on maintaining their shape and organisation. They largely succeeded in stopping Dundee getting dangerous balls into the penalty area, and the Dark Blues created only one more chance before half time. Alloa had ventured forward and when they lost the ball Declan McDaid broke clear down the left. He played Sow in on goal, but Willison managed to block the shot.

Dundee were finding it hard to get through the Alloa defence and couldn’t get another shot on target in the first half. A Sow header drifted across goal and past the far post where Paul McGowan chased after it, only to be given offside. Apart from that the only shots that Dundee could manage were a McGowan snapshot from 20 yards that flew well wide and an Adam free kick that struck the defensive wall.

Alloa started the second half with a more attacking approach and that sense of adventure proved unwise. Four minutes after the restart Dundee cut them open with a swift break. McGowan sent Elliott clear overlapping down the right. The full back made amends for his earlier error by providing an assist for the equaliser. He hit a fierce, measured, low cross to the far post where Osman SOW swept the ball over the line. Keeper Willison managed to claw the ball back into play but referee Mr Reid had no hesitation in awarding the goal.

The Wasps created a moment of concern in the Dee penalty area when Jack Hamilton failed to get enough distance on a punch and there was an unsightly scramble before the Dee cleared. That was the end of Alloa as an attacking force and the rest of the game belonged emphatically to the Dark Blues.

Paul McGowan almost added a quickfire second goal with a glancing header from a fine McDaid cross, but Willison saved superbly. Within seconds the Dark Blues were ahead, however. Charlie Adam swung over a corner with pace and menace. Liam FONTAINE timed his run perfectly and scored with a volley at the far post.

The Dark Blues continued to probe patiently for further goals, with the midfield in impressive control. Alloa simply couldn’t keep the ball away from their defence, always losing possession when they tried to get over the halfway line.

The only surprise was that it took almost 20 minutes for Dundee to score again. Lee Ashcroft pinged a low pass forward to Jordan McGhee, who quickly sent a lovely pass through the Wasps’ backline for Osman SOW to take a touch and shoot past Willison.

Sow threatened to complete a second successive hat-trick when substitue Jonathan Afolabi played him in, but he was crowded out and his shot was blocked. Charlie Adam tried to repeat the spectacular goal he scored against Dunfermline, but this time he was a yard off target. Danny Mullen, who came off the bench for the last half hour, went closer when he poked a close range shot inches past the post from a Sow cut back.

Dundee went on to close the game out very comfortably, and were well worth their win after a frustrating first half. The Dark Blues used the ball better, and more confidently, in the second half. The tempo was better and Dundee attacked as if they were expecting to score, rather than hoping somethine might happen.

On the Wasps last visit to Dundee they frustrated the Dark Blues in a remarkably one sided draw in which the Dee did everything right except score. When Alloa took an early tonight and defended tenaciously for the rest of the first half it seemed as if they might frustrate Dundee again and go one better than last season. However, they had no answer when the Dark Blues stepped up their game and asserted their quality after half time.

This was the third consecutive match in which Dundee have scored three times. Osman Sow has scored six goals in those three games, clearly relishing some excellent service. The Dark Blues still have some way to go and need to be more consistent within games, but there are clear signs of improvement. The second half of this game was a performance to build on.

It's difficult to know exactly what to write about in this double header programme given I'm having to pen it before we have even visited Dumfries on Boxing Day due to print deadlines.

With this being the final issue of 2020 and the first of the New Year I'd like to reflect back on what has been a tough year.

It has been really difficult for everybody and feels like a lifetime ago that the 2019/20 season came to a premature end.

What followed is something we've never experienced before and hopefully won't have to go through again with the lockdown.

The directors, staff, coaches and players should all take comfort from the fact that their work and sacrifices over the tough period has meant this football club is still going strong and is on good footing to move into the new year in a good place.

On the pitch, we have had ups and downs over the period but feel we have made improvements and as a team we are looking forward to moving into the second half of the season and up the table.

The final thing I will say is a message to the supporters. It's not been the same without you. Football is all about the connection with supporters, the moments we all share together and no game has felt right without you all watching from the stands.

We miss the backing but we are determined to end this year on a high and move into the new one with positive results that mean when you do get back we are pushing on to get this dub back to where we belong. Merry Christmas to everyone and a Happy New Year.