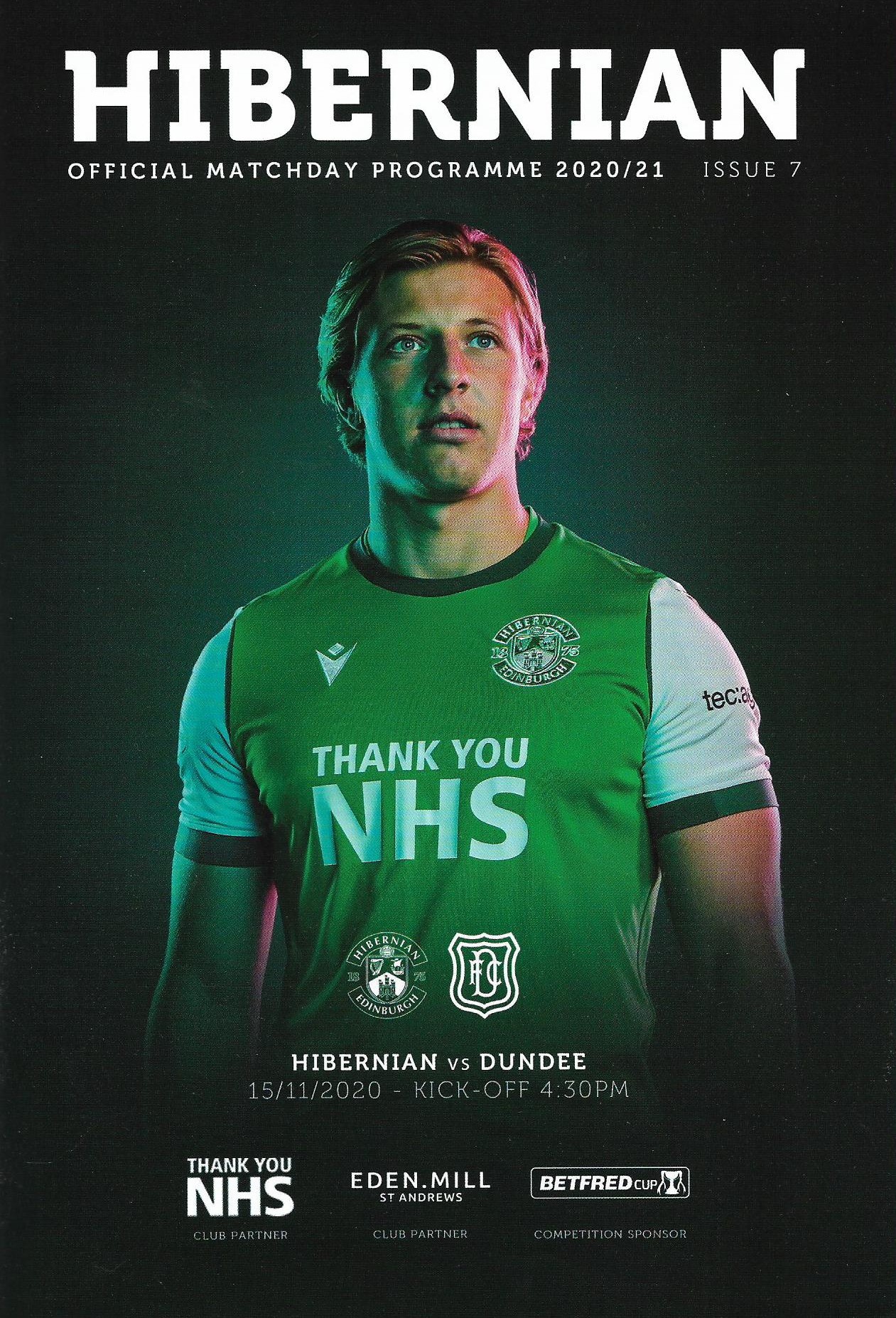 Dundee finished their Betfred Cup Group B campaign with a 4-1 defeat in Edinburgh against Hibs. Stevie Mallan gave Hibs an early lead but Christie Elliott equalised midway through the second half. The Dark Blues looked as if they might go on to take top place in the group, but Hibs slammed the door shut by scoring three times in only six minutes from a Jordan McGhee own goal followed by goals from substitutes Jamie Gullan and Merkel Hellberg. Despite the defeat Dundee qualified for the last 16.

The Dee’s only change from the team that beat Cove on Tuesday was Fin Robertson replacing the suspended Max Anderson. The squad was stretched so thin by injuries, suspension and Jonathan Afolabi’s international call-up that none of the five substitutes named had started a game and had only three appearances from the bench between them. Hibs’ four changes after last week’s defeat at Aberdeen were to bring in Dillon Barnes, Darren McGregor, Stevie Mallan, Drey Wright for Ofir Marciano, Ryan Porteous, Alexander Gogic and Christian Doidge.

Dundee could hold Hibs at bay for only 10 minutes. The Dark Blues were sitting deep while Hibs passed their way around the Dee’s half looking for an opening. Stevie MALLAN took possession in space 30 yards out, and with no-one moving out to challenge him, he fired a fine shot into the top corner of Jack Hamilton’s goal.

The Dark Blues responded well to the setback, but a spate of promising attacks didn’t produce any real threat to the home goal. Hibs gave the Dee a few careless free kicks in their own half, allowing Charlie Adam to try and flight in dangerous deliveries. Only one caused Dillon Barnes any problems, forcing the Hibs goalie to punch away under pressure.

The Dee’s best effort of the first half came after 20 minutes when Declan McDaid cut in from the left and his shot from 20 yards took a deflection off Drey Wright to loop over the relieved Barnes and over the crossbar.

Paul McGowan volleyed against the post from a Jordan Marshall cross, but the left back was flagged, possibly wrongly, for offside. Within a minute Joe Newell ran onto Kevin Nisbet’s lay-off to shoot across goal against the base of Hamilton’s post from a very difficult angle.

Hibs were well on top for the last 20 minutes of the half and could have given themselves a comfortable lead if Nesbit had taken either of two good headed chances.

Hibs started the second half by going very close when Martin Boyle was only inches away from connecting with Jamie Murphy’s low cross. Adam then gave the ball away carelessly to Boyle in midfield and Nisbet ran on to shoot wide from 22 yards.

Charlie Adam showed his true ability with a delightful ball over the Hibs defence for Danny Mullen to run in. He stayed on his feet from a clumsy challenge, but Barnes was able to grab the ball. The Dark Blues were now very much in contention, and for the next 20 minutes had their best best spell of the game, matching Hibs in midfield and creating problems for the home defence with some excellent passing in the final third.

A Mullen dummy almost released McGowan, but the Hibs defence managed to close him down. Another fine Adam pass found Elliott on the right of the box. He set up McGowan, but his shot was blocked.

After 70 minutes Dundee scored a well crafted and thoroughly deserved equaliser. Paul McGowan turned 30 yards from goal and played a great ball over the Hibs defence for Christie ELLIOTT to run in, take a touch and shoot past Barnes.

The Dark Blues kept coming forward, believing they could take all three points, but Hibs shifted up a couple of gears to settle the match with three quick goals. Jamie Murphy showed clever skill on the left to reach the byline and his fierce low cross flicked off Jordan McGHEE, who was challenging Nisbet, and over the line.

The third and fourth goals were almost identical. Each time Nisbet drove at the Dee defence, creating space for Boyle on the right, and each of his low crosses was turned in by substitutes. Jamie GULLAN swept in number three, and Melker HALLBERG hit the fourth, only seconds after coming onto the pitch.

The goal rush settled the match and confirmed Hibs as the winners of Group B and seeds for the last 16.

There were positives for the Dee from the game, despite the threadbare squad. It was sometimes a struggle in the first half to provide Danny Mullen with effective support and threaten Hibs’ defence. But for much of the second half the Dark Blues were able to force the home side onto the back foot with some imaginative passing into the penalty area. The hope that the equaliser brought was quickly crushed, however, when Hibs took charge to kill the game and Dundee’s defence allowed them to run in those late goals far too easily.