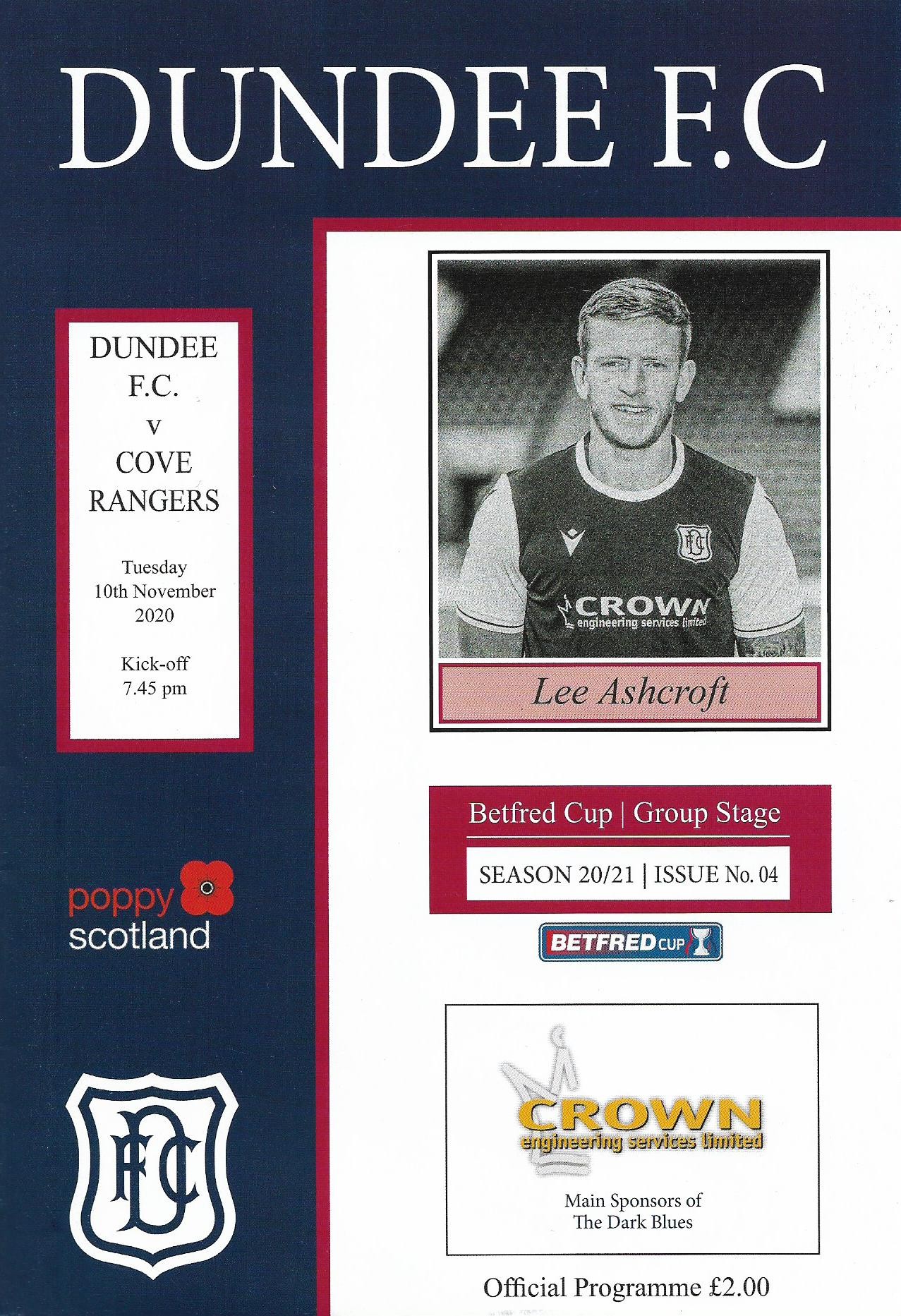 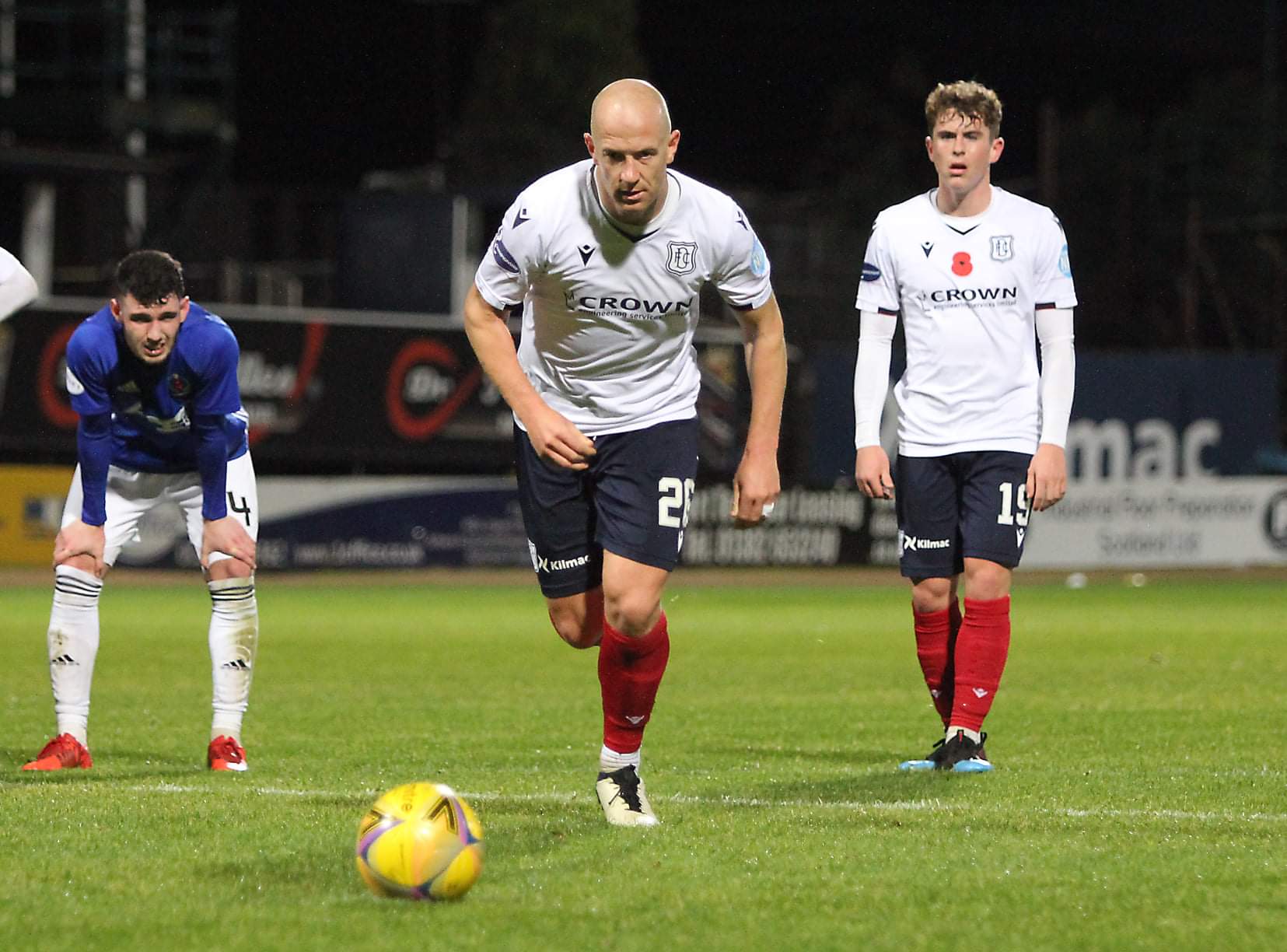 Dundee moved to the top of Betfred Cup Group B with a 3-0 win over Cove Rangers at the Kilmac Stadium. Paul McGowan gave the Dee an early lead and the game was wrapped up with late goals from Danny Mullen and a a Charlie Adam penalty. Cove had to play for most of the second half with nine men after Blair Yule and Jamie Masson were sent off either side of half time. Dundee could afford the luxury of a missed penalty, by Charlie Adam, following the first red card.

Dundee made two changes following the draw at Alloa. Jack Hamilton and Max Anderson returned to the starting eleven replacing Calum Ferrie and Jonathan Afolabi. After their 100% start in League One, Cove brought in Adam Livingstone, Jamie Semple, Sebastian Ross and Jordon Brown in the place of Ross Graham, Harry Milne, Connor Scully and Rory McAllister.

The Dark Blues got off to a brisk start and scored after only five minutes. Declan McDaid showed neat skill on the right and found Paul McGOWAN in space to take a touch and shoot into the top corner from 15 yards.

Dundee’s fast passing and movement were entertaining and giving Cove’s defence constant problems. A fantastic long pass from Charlie Adam put Danny Mullen up against a single defender. The striker made space to shoot but McKenzie did well to save at the expense of a corner.

Adam had a go with two free kicks. McKenzie saved the first and the second flew narrowly wide. Adam wasn’t far off target with a shot from distance in open play, and McDaid went close at the end of a prolonged Dark Blue attack.

Cove might have been second best but looked dangerous when they were able to attack. Their best two efforts of the first half came from just outside the penalty area. Jack Hamilton had to parry a firmly struck half volley from Jordon Brown, and the Dee’s keeper got down low to save from Mitch Megginson.

Max Anderson was having a fine game, pressing well when Cove had the ball and attacking effectively when the Dee were in possession. midfield. Five minutes from half time Anderson ran into the penalty area on the end of a Mullen pass only to be brought down by Blair Yule before he could shoot. Mr Napier decided that Yule’s foul had denied a goalscoring opportunity and produced his red card. Unfortunately Charlie Adam’s penalty struck the outside of the post.

Dundee had been building attacks from the back with both Jordan McGhee and Cammy Kerr moving forward from central defence with the ball and disrupting the Cove midfield. At the start of the second half Kerr started a dangerous attack, finding McDaid wide on the right. His cross was teed up by McGowan into the path of Adam, who drilled his shot wide.

Ten minutes after the interval Cove were reduced to nine men when Jamie Masson caught Jordan Marshall with a late challenge.

Within a minute Dundee should have killed the game after Anderson forced his way into the penalty area. McGowan took the ball, turned neatly into space and shot wastefully over the bar from eight yards.

Cove responded to the sendings off by pulling men back, conceding the midfield, and defending in depth, usually with a six man wall in front of the keeper. The Dark Blues struggled to cope with the deep defence. They had no difficulty geting into promising positions, but repeatedly failed to find the passes and crosses to open up Cove.

The visitors were relying on the hope of a breakaway, a set piece, or a mistake to get back into the game. Their best, and only, opportunity came just after the hour from a mistake by Jack Hamilton, who forgot that he couldn’t pick the ball up again after releasing it unless another player had touched it. He carelessly conceded an indirect free kick 15 yards from goal. The free kick was touched to Megginson, who shot wide. That was the last time that Cove threatened the Dundee goal.

Cove’s nine men worked furiously hard to keep the Dee at bay, throwing men in the way of countless crosses and shots. The Dark Blues simply couldn’t find the inspiration they needed to get past Cove’s desperate defending.

Shaun Byrne went close with a deflected shot. Charlie Adam produced the pass of the night to send Jordan Marshall clear, but a heavy first touch cost him the chance to shoot. McDaid, Anderson and substitute Finlay Robertson all had a pop at goal, but nobody could get past Stuart McKenzie in the Cove goal.

Finally, after 84 minutes Dundee were able to break through. Danny MULLEN took a pass from Adam with his back to goal, about six yards out. He turned smartly and slipped the ball past McKenzie.

Dundee surged forward looking for another goal, and it arrived after a fierce shot was McDaid was saved by McKenzie, with the loose ball heading to Mullen for a tap into the empty net. Ross Graham pushed him over, giving the Dee a second penalty. Charlie ADAM was not going to miss this one, and smashed a low shot inside the post.

Following the third goal Dundee sent on three substitutes to make their competitive debuts; Cammy Blacklock, Jack Wilkie and Nicholas Hamilton came on to help Dundee see the game out.

The two dismissals made this a very strange game. The Dark Blues played their best football when they were up against 11 men. Dundee were already well on top when the first red card was produced, and if they had scored from the resulting penalty would surely have gone on to win comfortably.

Against nine men, working hard in a massed, packed defence, Dundee struggled to turn dominance into goals, or even real chances for much of the second half. The incisive passing of the first half became sloppier and the crosses almost always found defenders rather than attackers. Nevertheless, Dundee never looked in danger of dropping any points in this match, and beforehand everyone would have been very happy at the prospect of three goals and a clean sheet.

Good evening, we are looking forward to getting back in action tonight back at the Kilmac Stadium.

We come.into the game unbeaten in three but very disappointed with the previous two results.

Despite being two very different games we were disappointed to only take a point in each of them.

I was disappointed that we have conceded two goals from crosses on Friday, it's frustrating. It's my job to get it right and I'll take it on the chin.

I set them up and signed the players but there has to be a responsibility when the ball comes into the box that you go and win it and not give away easy goals.

Alloa are a good side who can cut you open. If they had scored three goals by doing that I'd hold my hands up but they haven't

The three goals were very avoidable and that is something we have been working on.

The positive is we showed good team spirit to fight back and take a point.

Tonight will be another tough test so we will have to beat our best. We know what Paul's team bring and they have started the season very well.

Wherever you are watching tonight.