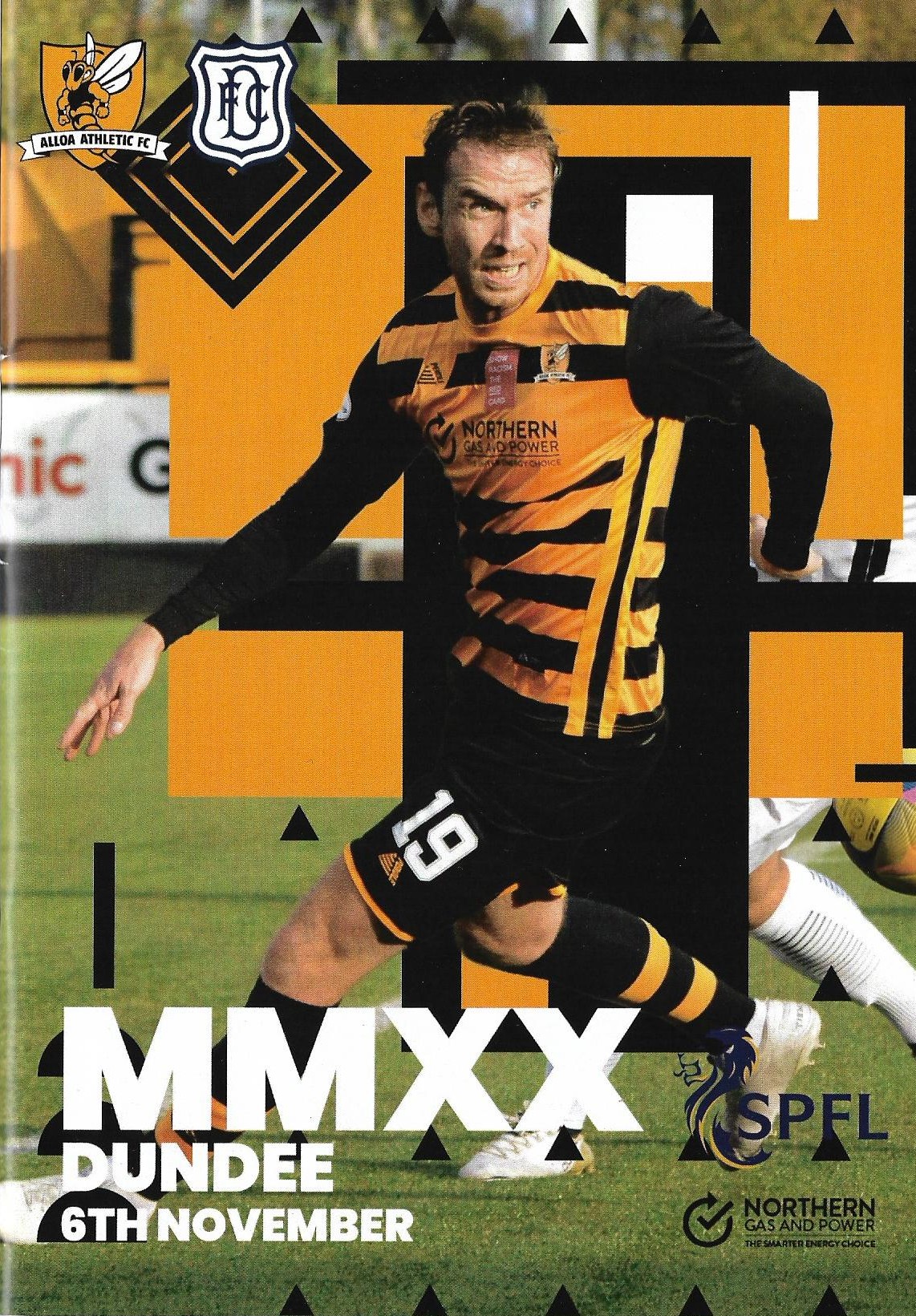 Dundee came from two goals down to take a point in a 3-3 draw against Alloa Athletic at the Indodrill Stadium. Robert Thomson gave the Wasps a half time lead but Declan McDaid equalised at the start of the second half. More poor defending by the Dark Blues allowed Alan Trouten to help himself to two close range goals. With defeat looming the Dee came back strongly, scoring twice in the last 15 minutes through Cammy Kerr and then a Charlie Adam penalty, to rescue a point.

Dundee made two changes from the draw against Raith Rovers. Christie Elliott and Paul McGowan started instead of Lee Ashcroft and Graham Dorrans, who were unavailable. Andy Graham, Steven Hetherington and Adam Brown came in for the Wasps, replacing Edin Lynch, Innes Murray and Lee Connelly.

Neither goalkeeper had any problems in the first half hour of a game that took a long time to get going. Alloa were playing neatly out from the back and rarely looked in trouble of losing possession as they did so.

The Dark Blues had a couple of fleeting half chances from set pieces, but struggled to get anyone on the end of numerous crosses into the Wasps’ penalty area. Alan Trouten managed to play a fine, curling cross into the Dee goalmouth, but Robert Thomson couldn’t connect properly with his header.

Dundee only once looked dangerous from a cross when Jordan Marshall whipped a tricky ball to the near post but Andy Graham stretched to clear from Jonathan Afolabi. Apart from that the Wasps’ defence coped comfortably with everything that Dundee tried.

Just after the half hour sloppy Dee defending allowed Alloa to take the lead. A corner was cleared out to the Dundee right and Adam Brown flighted a long cross beyond the far post. THOMSON was left unmarked to score, volleying neatly across Ferrie.

The Dark Blues struggled to get back into the game, giving the ball away too often as they attacked with little conviction. They were fortunate not to concede again late in the first half. Alan Trouten mishit a shot across goal and Thomson somehow missed the ball as it flew past the far post.

Five minutes from half time Dundee had to make a change when Osman Sow came on for the injured Afolabi. The first half finished with Dundee on the attack but without creating any chances in the mist.

The Dee made the best possible start to the second half, taking only a minute to equalise. Charlie Adam’s cross from the left was cleared as far as Declan McDAID, who took a touch before lashing a precise low shot inside Willison’s left hand post.

The quick goal gave Dundee a boost that was thrown away with another badly defended set piece only four minutes later when the defence couldn’t clear a free kick. After the ball bounced around in front of goal Ferrie saved well from Kevin Cawley only for Alan TROUTEN to shoot into the empty net.

Falling behind again so quickly left the Dark Blues deflated. As the Dee lost impetus Alloa looked more dangerous and added to their lead just after the hour. Steven Hetherington pulled down a high ball wide on the left of the Dundee penalty area and cracked a low shot straight at Ferrie. TROUTEN got a touch right in front of the keeper to send the ball through the keeper’s dive and over the line despite Cammy Kerr’s attempt to clear.

With half an hour to go Alloa were hot favourites to go on and take all three points against a Dark Blue side that were out of touch and making too many mistakes. To their credit Dundee picked themselves up and threw themselves at the Wasps, finally taking charge of the game.

Christie Elliott fired over when the ball broke to him from a free kick. Paul McGowan seemed to have done everything right when he spun on Jordan Marshall’s cross and shot from only six yards. However, he was foiled by an astonishing save by Willison who somehow turned the ball over the bar.

After 75 minutes Dundee pulled a goal back. Charlie Adam whipped a terrific free kick in from the right. Cammy KERR threw himself at the cross and missed but the ball rebounded off the post then into the net off his back as he landed on the goal line.

Dundee were doing all the attacking now and Alloa couldn’t hold onto the ball and keep the Dark Blues away from their penalty area. After 84 minutes the Dee’s pressure paid off with a rather fortunate penalty. Adam’s 30 yard shot struck Scot Taggart on the arm and Mr Muir pointed to the spot, possibly a harsh decision. Charlie ADAM took the kick, and blasted a perfectly struck low shot past Willison.

If the Wasps were unlucky with the penalty they were more fortunate five minutes later. Lee Connolly brought Declan McDaid down in the penalty area, but the Dee was booked for simulation, to his understandable dismay.

In the end a draw was a fair result. Dundee were pushing hard for all three points at the end and a winning goal would have been no surprise. However, the Dee’s display in the first hour was poor and it would have been hard on the Wasps if they had taken nothing from the game. They were the better team for most of the match, more organised and determined in defence, and showing more composure in midfield.

Once Dundee did finally get a grip of the match they were well on top. But if you are second best for an hour, and give the opponents a two goal lead then you hardly deserve more than a point. Last week Dundee threw two points away with shoddy late defending. Sadly they carried that forward into tonight’s match. The Dark Blues’ defending was nowhere near good enough. It’s hard to win in any league if you give soft goals away.