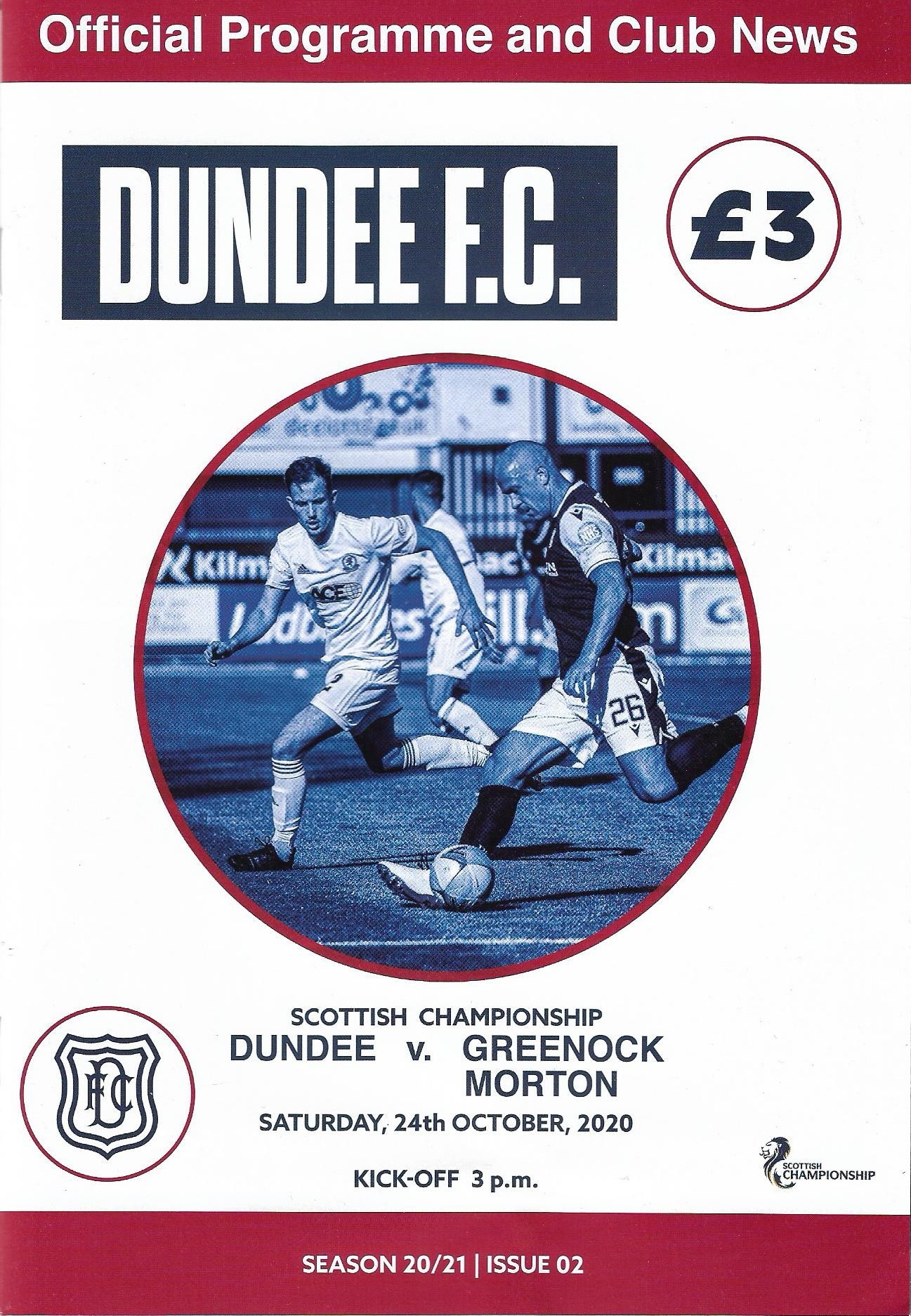 Jonathan Afolabi’s early goal gave the Dark Blues a 1-0 win over Morton at the Kilmac Stadium. Dundee couldn’t find further goals in a highly competitive match with few chances but held out to take a deserved win. Morton had to play the last 20 minutes with 10 men after Robbie Muirhead was sent off.

The Dark Blues made five changes following the defeat at Tynecastle and switched to a 4-4-2 formation. Calum Ferrie, Shaun Byrne, Declan McDaid, Danny Mullen and Jonathan Afolabi came into the starting line-up. Jack Hamilton, Finlay Robertson and Paul McGowan moved onto the bench while Jordon Forster and Osman Sow were injured. Morton brought in Michael Ledger and Cameron Blues to replace Aidan Nesbitt and Josh McPake, the former Dee loan player, who was sent off last week.

Dundee got off to the positive start they needed, carrying the game to Morton with some smart passing from midfield. The opening goal took only four minutes to arrive. Declan McDaid’s cross from the right was headed clear as far as Jordan Marshall, just outside the penalty box. He took a touch, drove for the byline and pinged a hard, low cross into the danger area. Jonathan AFOLABI left the goalkeeper helpless, scoring with a perfectly struck volley from 10 yards.

The Dee continued to dominate with some lovely passing and movement in the Morton half. They kept finding space well in the wide areas, but were let down by some erratic crossing.

Afolabi had two powerful shots from the edge of the penalty area. Both were on target but each struck defenders, the first deflection taking the ball safely into the arms of McAdams in the Morton goal and the second effort spinning over the bar for a corner.

The goal threat was coming only from the Dark Blues and it Morton didn’t manage a serious shot until the 25th minute when Calum Ferrie comfortably clutched Cameron Blues’ shot.

Despite some neat skill and inventive approach play the Dark Blues couldn’t secure a second goal. Late in the half Morton came more into the match, competing more effectively in midfield as Dundee were sometimes wasteful in possession.

Dundee started the second half brightly and Kerr, McDaid and Adam combined to play their way through the Morton defence, which recovered in time to crowd Adam out before he could get his shot away.

The Dee defence conceded a cheap corner when they allowed the ball to run out of play, expecting a goal kick. It almost proved a costly error because Morton’s central defender Markus Fjortoft met the corner with a powerful header that Adam headed clear.

As the second half wore on the game became increasingly competitive and often scrappy. Neither side was able to craft clear chances, though Dundee had the creative edge and always looked capable of adding to their lead. Morton were at their most dangerous from set pieces, and went close when Sean McGinty headed wide from a corner.

By that point Morton were down to 10 men after Robbie Muirhead showed a distinct lack of judgment in how far he could go in annoying the referee. After being booked for disputing a throw in he sarcastically applauded Mr Ross who didn’t even need to reach for his pocket to wave his yellow card a second time before reaching for the inevitable red.

To their credit Morton worked furiously hard to compensate for their numerical advantage and took the game to Dundee. However, they struggled to open up the Dark Blues’ defence in open play and Ferrie had only one save to make, deep into injury time. Substitute Aidan Nesbitt sent a low, angled shot through a crowd of legs but the young Dee keeper held the shot and the three points were safe.

This win was very much a case of the result being much more important than the performance. Certainly the Dee were far better than last week, but there is still some way to go. They failed to settle on the ball and take the sting out of Morton’s attempted fightback when they had a numerical advantage. However, the defence held firm and it was no surprise that they earned a valued clean sheet. There was much to enjoy in the Dark Blues’ attacking in the first half, though they should really have found some better final balls to make the points safe before the interval.

It is always important to record the first win of a league campaign, and doing so with a clean sheet was particularly pleasing after last week. Calum Ferrie will be delighted that he kept a clean sheet in only his second start in a league match. The other players who were brought in today all made valuable contributions. Shaun Byrne in particular was tidily effective in the holding midfield role. There will doubtless be many better games at the Kilmac Stadium this season, but few will be as significant as this first win of the league campaign.

Good morning or afternoon depending on when your programme had arrived today.

I hope you are all looking forward to the match and despite not being inside the stadium I know you will be shown your support from home.

I spoke in my programme notes for the Forfar game about supporters missing the match and with that match being called off we haven't experienced it in a competitive match at home but we will this afternoon.

Last weekend at Tynecastle was really disappointing as a group. There were poor performances from staff and players and it's one we need to put right this weekend.

We've been back on the training pitch to get that one out of the system and focus on what is coming next with hard work. We trained on Saturday after the game. The players were down as you would expect as it was only 12 hours after the game but they came in Monday morning ready to go.

They have been in this position before. You win games, you lose games, you come in an the Monday morning and you have to put it to bed. Whether you have won or lost you have to get it out of the system and hard work does that. Then you work through the things which weren't so good in the game and we've done that.

Morton have had a good start to the season. Like us, they were on the ascendancy before the lockdown came They put a good run together and they gave us trouble in all three games we played them.

In David Hopkin, they've got a manager who knows the league and has done well in this league before. They are a real threat to any team in this division and it's one we need to be at from the start.

We are looking forward to getting back out there and giving everything for the win.

Enjoy the match, wherever you are watching from.