These teams should have played off their Scottish Cup tie on Carolina Port on Saturday. but heavy showers of snow and sleet which fell in the early part of the day rendered the ground a perfect quagmire, and the referee very properly declared the Cup tie off.

Not to disappoint the large crowd a friendly was agreed on, and the teams took the field as under:-

Dundee kicked off, but the visitors nipped the opening rush in the bud, and their right wing getting away in a twinkling were down in front of Barrett. A corner fell to their lot, and, the ball being well centred, McColl opened the scoring for the villagers.

This early success seemed to inspire the Renton lads, who dashed into the pools which dotted the ground with rare pluck and determination.

Dundee, in contrast, were weak and half-hearted in their attempts to manipulate the leather through the mud, and, in consequence, play was mostly confined to the Dundee end.

Relief came at last, and Dundee, after severely pressing Renton's defence, were rewarded by a well-taken goal from the foot of Sawers.

Renton again took up the running, and shortly before half-time McColl sent in a hard shot, which Barrelt let slip throngh his fingers, and Price running in piloted the ball into the net, thus putting his team one up, and at the interval the scores stood -Renton, 2 goals; Dundee, 1.

After an interval of nearly a quarter of an hour the game way restarted. Dundee, determined to make up their leaway, started in dashing style, and in a few minutes Gilligan sent the hall into the net. The referee disallowed the point for offside.

An effort of the Renton men to increase their lead met with a similar ruling.

Sawers had a good chance of securing the equaliser, but he missed the post by inches. Some miss kicking by the Dundee defenders let the villagers in, and the home goal ran some exceedingly narrow escapes, but the easiest chances were thrown away, and play was transferred to midfield.

From this to the close the visitors had slightly the best of matters, but no further scoring took place, and a disappointing game ended - Renton, 2; Dundee, 1. 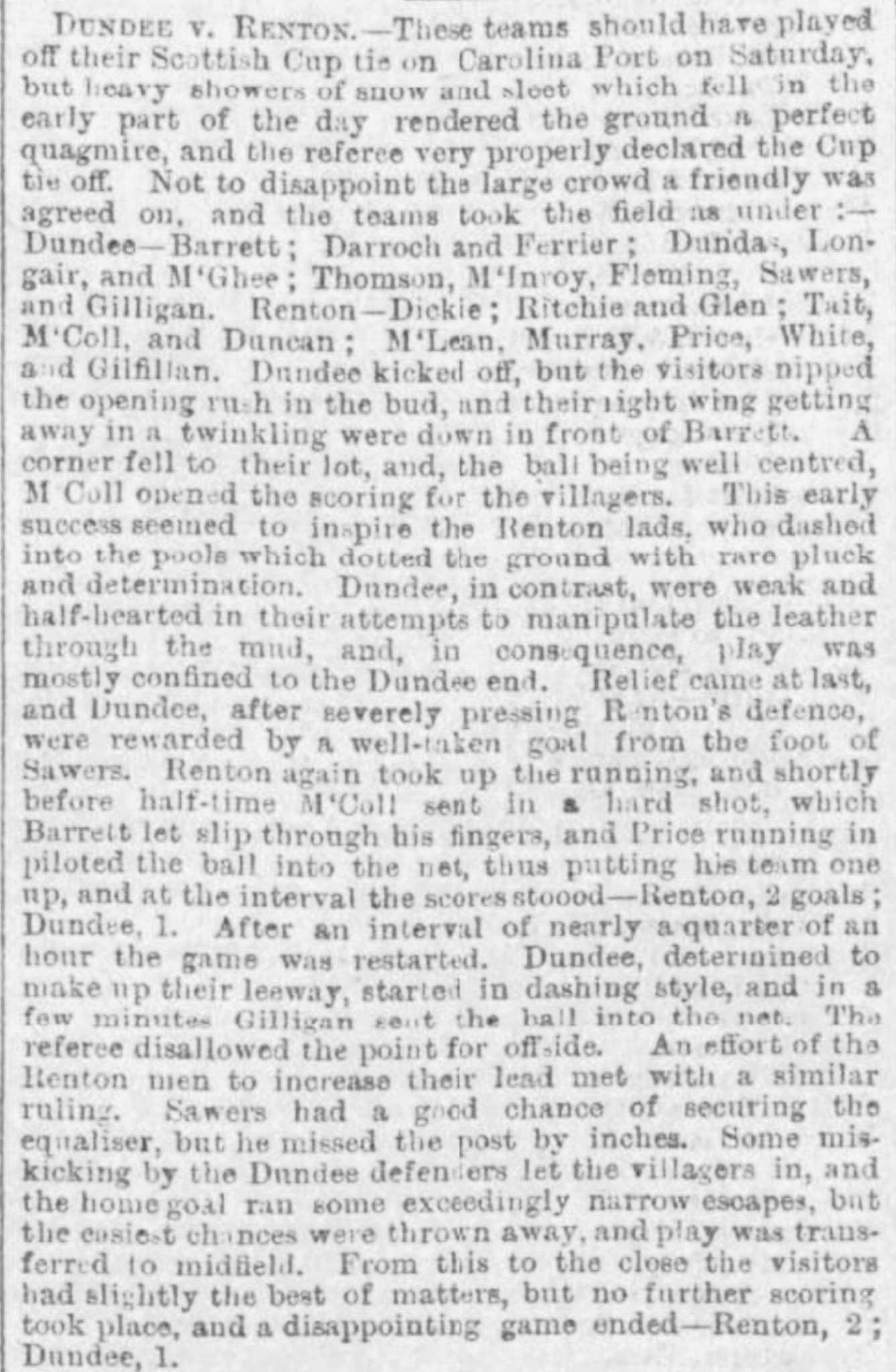