The famous Edinburgh Hibernians paid a visit to Carolina Port on Saturday, and engaged the Dundee in a friendly game.

Unfortunately the weather militated somewhat against the attendance, but, nevertheless, there were close on 3000 spectators.

Neither team was fully represented, Longair and McInroy being absent from the Dundee ranks, while the visitors were without Amos and McGeachin.

The Hibs, kicked off with the wind in their favour, and soon made things lively for the home defence. Darroch relieved, and the Dundee right wing got away, but McEarlane intervened, and play was again transferred to the home end.

The Hibs, plied Barrett with quite a number of shots, all of which he saved coolly and cleverly. The Dundee front rank broke away again, but were brought up before they could get far, and the Irish men renewing the attack, the home goal had a number of narrow shaves.

Eventually the ball was, skied in front of the Dundee goal, and Smith, rushing in, banged it into the net, scoring the first goal of the match.

Play from this to the interval was mostly in favour of the visitors, and Barrett had several hot ones to save.

On restarting the Dundee forwards set to work in earnest, Fleming change to the inside position, and this greatly improved the play of the left wing.

The visitors were now obliged to act on the defensive for a considerable time. A foul against Dundee brought relief, and Barrett was called on at the other end. He saved smartly, however, and Keillor gave the left wing a chance. Fleming made a deal of ground, and when tackled kicked over to Thomson, who ran the ball up the wing at top speed.

McFarlane tackled him near the goal line, but the Dundee lad dodged cleverly, and sent in a low swift shot, which Donnelly, with a couple of Dundee players on top of him, was unable to hold.

This put the teams on level terms, and play became more lively.

The Irishmen had now the best of the exchanges, but no further scoring took place on either side, and the game ended - Dundee, 1; Hibernians, 1. 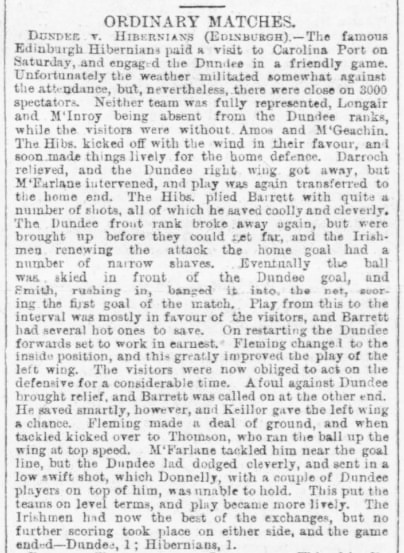