The Dundee brought off the first of their holiday fixtures on Carolina Port yesterday when they met Sunderland in a friendly match.

A visit from this famous combination is looked upon by Dundonians as one of the titbits of the football season, and the day being fine fully 7000 spectators were within the grounds when the game commenced.

Sunderland were without several of their usual players, but, nevertheless, were strongly represented. Dundee had also made some alterations in their ranks, McInroy being transferred to the left wing to partner Fleming, while Richardson, a promising young Brechin player, assisted Thomson.

The following were the teams:- Dundee - Barrett, Darroch and Campbell; Dundas, Longair, and Keillor; Thomson, Richardson, Sawers, McInroy, and Fleming.

At the outset the Dundee forwards came away with a rush, and forced a corner within a minute of the start. The free kick was resultless, and the visitors got down to Barrett's charge, but Hyslop shot wide of the mark. Goodchild next had a try, and just missed the post by inches.

Dundee now took up the running, and Doig's saving powers were severely tested, but the old Arbroathian was not to be caught napping, and repelled shot after shot in the coolest manner.

The Dundee forwards were playing finely at this stage, Fleming and Sawers being the most conspicious. Indeed the latter player has never given a finer display since he donned the Dundee colours.

Keillor at half-back was also working hard, and he was mainly instrumental in stopping the rushes of the opposing front rank.

Close on half-time the Dundee right wing got on the ball, and Richardson sent in a shot which glanced off McCreadie's toe and landed in the net, thus drawing first blood for Dundee.

On the teams reappearing it was seen that the strangers had rearranged their team. Hyslop changing places with Hannah, while McCreadie resumed his accustomed position at right half.

In this period the Wearsiders showed to more advantage, Hyslop, Hannah, and Wilson each having good tries at the Dundee goal, but Barrett was all there, and score they could not.

The strangers were indulging in some rather shady tactics, and the referee repeatedly brought them up for forcible play. Still they kept up the pressure, and Wilson, from one of his famous shies, almost bronught about the downfall of the home citadel.

The Dundee defence was safe, however, and defied the efforts of the visitors.

When the whistle was blown the scores remained unaltered-Dundee, 1; Sunderland, 0. 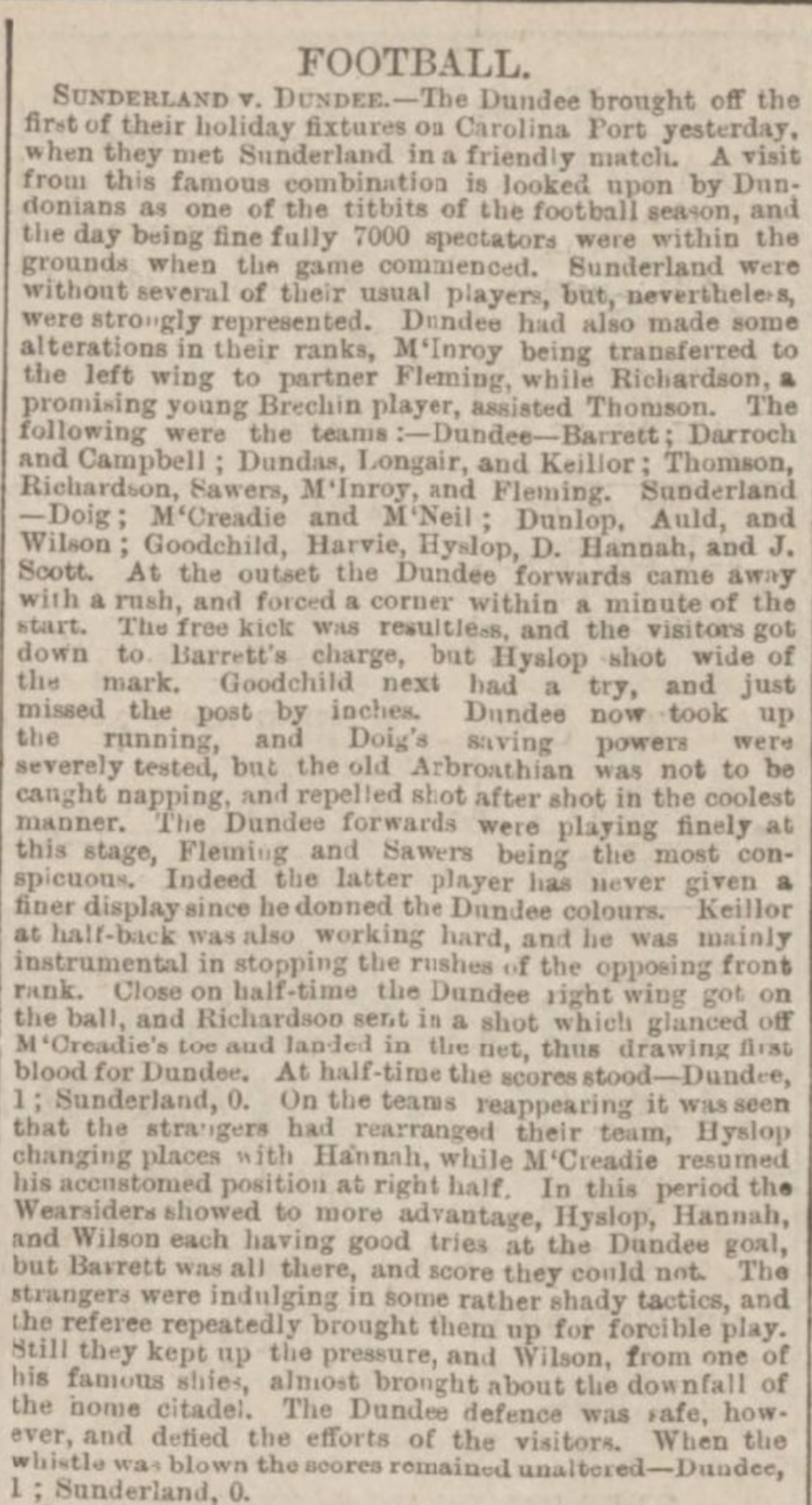