Too easy, of course, but that was expected.

No club club team in Scotland could have given this all-star army team a real run. As a try out for the Dark Blues, it wasn't so hot. Perhaps the Dens Park lot would have gained more by sitting in the stands beside their pals from Tannadice!

They would have had an onlookers view and picked up many wrinkles. Maybe an insight into Joe Mercer's perfect distribution, Macaulay's quick gather and dispatching, Busby's deft transfers and Black's positioning.

Also, they'd have seen the weakness of the opposition as we saw Dundee. First of all, let's remember how terrific a team these soldiers make, and then consider in that light where the Dark Blues fell short.

Bennett passes with honour. He's quick, alert, and he's confident, plus safe hands. Rennie's dash ought to combine well with Bobby Ancell's experience and waiting policy. The defence is good.

Half Back doubtful: Gray, steady and reliable - he won't meet a Welsh every week. Fenton was only on loan to Dundee from the Army touring team, and was helping out.

Forward, Anderson passes not with honour, but remember, he was tackling Jimmy Carabine. Roberts, of Dunipace, is worthy of another trial. The others were outclassed.

Changes are necessary, Mr Anderson. One I offer free gratis. Why not play Turnbull at right-half if he can't make the grade at centre? He isn't an inside man. He needs room and space but he's for the build, the dash, and some skill in, purveying.

Dundee have the elements to build on and we'll see something different against old opponents Aberdeen.

Yesterday's game was an entertaining spectacular that Dundee fans will talk about for a long time. They saw real football from the Army, as good as anything I've seen in these war years, and probably, that was the reason it was so difficult to see Dundee's team at its best and estimate it's real value.

Even with Peter Craigmyle as unofficial coach to the new Dundee team, it was difficult to imagine them scoring against the lanky Swift.

His narrowing of angles and precise judgement are almost uncanny. But it was his nonchalant one-handed pick ups the crowd liked.

Many wish they could have seen Swift called upon to save a Dave McLean special but even without that, it was plain that this fellow could keep goal. 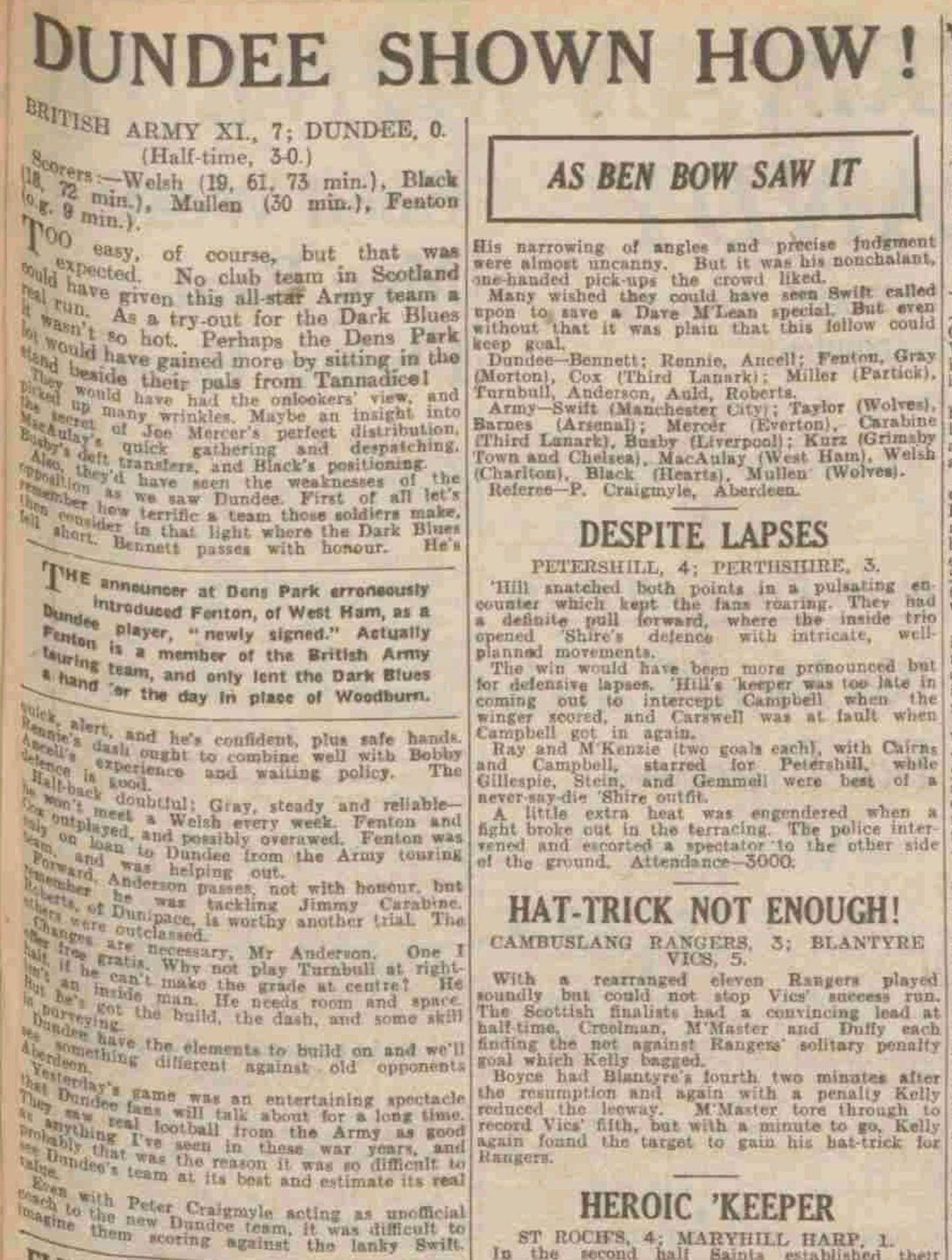