The well-known Manchester team, who are at present on tour in Scotland, were the guests of the West Craigieites yesterday.

After the gallant struggle with the "Spiders" at Glasgow on Saturday last, a close game was anticipated, and as a result a large concourse of spectator assembled to see the performance of the different League teams.

Through McNaught being late in turning up, the kick-off was delayed for bout half an hour. The following were the teams:- Newton Heath - Fall; Mitchell and Clements; Perrins, Stuart, and Davidson; Farman, Hood, Donaldson, McNanght, and Erentz.

Dundee won the toss, and Newton Heath kicked off downhill, and at once invaded the home territory, and Barrett was called upon to save.

Dundee then got northwards, and Thomson finished up some fine work on the right by cleverly centring, and Dundas had no difficulty in drawing first blood for the homesters.

From the kick-off the Heathens got south, but some fine defensive work on the part of Longair and Ferrier drove them north, and Gilligan, pounding on the ball and getting well up the field, he passed the sphere across the goalmouth to Thomson, who put on point No. 2 for Dundee. T

he Heathens thereafter secured a corner, but nothing came of it.

Play was now somewhat tame, and Petrie, who should have never been allowed to go on the field, brought himself under the ban of the referee, and was checked for some shady bits of play.

The game was pretty equal to the end of the first forty-five, which ended - Dundee, 2; Newton Heath, nil.

With the timeline in their favour, it was expected that the locals would quickly add to their total, but by a rather sudden break away, Hood scored for Newton Heath.

Shortly afterwards Petrie for deliberately kicking Hood, was ordered off the field, and for the reminder of the game Dundee played ten men, Dundas leaving the centre and going half-back.

Play was now mostly in favour of the visitors, but all their efforts were nullified through reckless shooting.

Towards the finish Dundee made several efforts to again pierce the Newton Heath defence, but no further scoring took place, and Dundee won a somewhat tame match by 2 goals to 1. 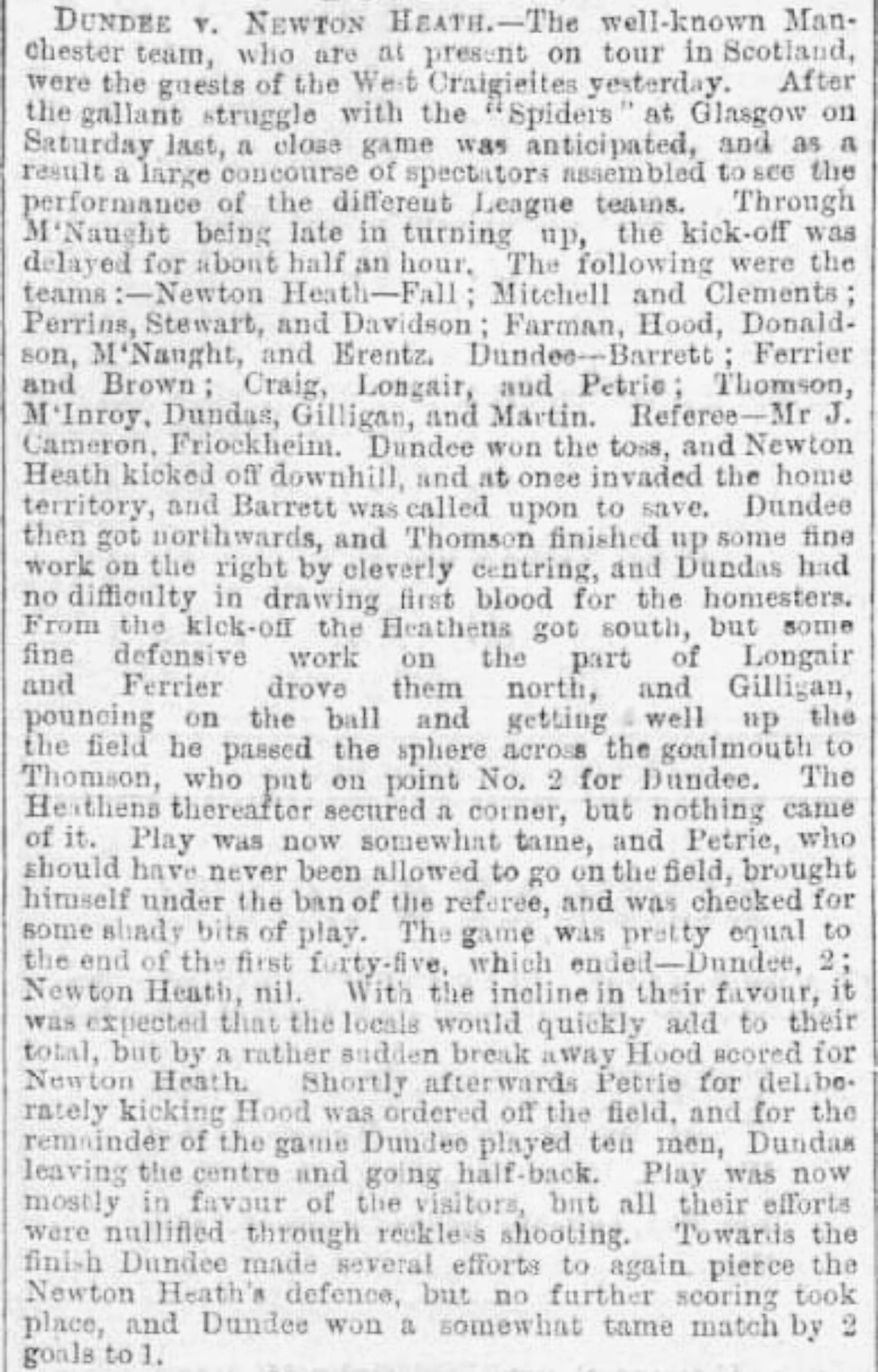